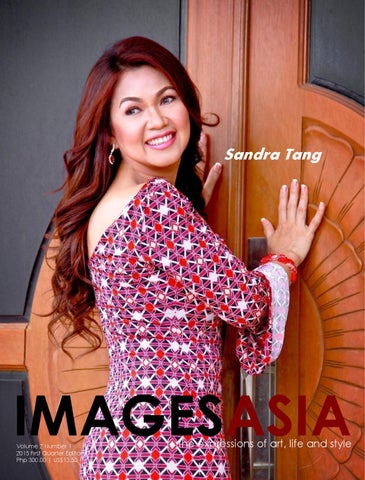 the expressions of art, life and style

otton candy, dandelions, confetti, velvety cheesecake and freshly peeled fruits are just some of the things that come to mind once Sandra Tang smiles at you. She approaches life with vigor and joie de vivre. Like a bubbling brook, her lighthearted nature seems to be her Midas touch in entrepreneurship at every turn. She successfully ran a network of business outlets in Luzon and Bicol. An avid runner, Sandra also stays in shape by being selective with the food she partakes and keeping her thought free from negativity and worries. She considers her two children as her priceless treasures. Her daughter has a business of her own and her son is an English and Japanese Instructor abroad.

Though she was widowed more than six years ago, Sandra found her true love the second time around with her fiancé who shares the same passion for business and drive to help others through community service. Sandra finds contentment with her fiancé as they both dedicate their lives to humanitarian work such as taking time out to care for the elderly and providing basic necessities for indigent and street children. Eventually, Sandra together with her fiancé shall create a foundation to further provide spiritual guidance and basic services to those in need. To recharge, Sandra enjoys travelling with her fiancé around the Philippines and Asia. She and her fiancé plan to travel around the world to visit destinations where miracles were known to happen.

et Zaphire O’Sullivan engage your visual sense not just with her gorgeous looks but through her paintings. A fashion model in her youth, Zapphire exudes with her fashion sense, not wanting to conform to classic, she goes for trendy, out of the box pieces. She is eclectic even with the Iconic figures she looks up to as she dreams of achieving a Marilyn Monroe look, Oprah Winfrey’s wealth and Hillary Clinton’s brain. The same can be said of her travelling experience, she has been to many different places munching in their culture, sights and their tummy fares. Zaphire maintains a collection of bells from her travels, a very appropriate collection since Bells were made to commemorate important events or people and have been associated with the concepts of peace and freedom.

Zaphire has been through a lot and muses her philosophy in life “you can&#39;t fix yesterday so don&#39;t beat yourself up over it. The only reason to beat yourself up is if you don&#39;t learn from your mistakes”. This passionate Bicolana is very proud of her husband and children, wife of successful businessman and a mother of three, Zapphire shares that her brood includes a daughter who is happily married to a French guy in which they have 2 beautiful kids and living in France. A son who works as a finance investor in Sydney, Australia and another daughter studying in Bond University as a scholar taking up International Studies in Gold Coast, Australia.

14 She fondly recalls an advice from her Father-In-Law “you can&#39;t call yourself successful in life if your children are not successful as well as your marriage”. That was a challenge she took and has been her greatest achievement in life. A graduate of University of Life as her husband would put it, Zaphire excels in her artistic side and dreams of later having an exhibit of her paintings. When asked about her secrets to beauty and maintaining a sexy figure, She ruminates “happy life, happy wife”.

Lobby Bar&#39;s ideal location is convenient for a cup of coffee or delicious cocktail. Sip a glass of wine or a cold beer while enjoying views of the hotel&#39;s garden and pool. The bar offers two areas that seat 180 guests and features live, nightly entertainment and Free high-speed, wireless Internet access

Feria Feria&#39;s culinary team boasts chefs from around the world, meticulously preparing the finest of Chinese, Asian, Filipino, Japanese, Indian, Mediterranean, International cuisines and desserts. In addition to the 240-seat dining room, the restaurant also offers private dining rooms suitable for 12 to 18 guests Feria serves fresh, local cuisine and a variety of international dishes around the clock. Eating at Feria creates exciting memories for travellers as the restaurantâ&amp;#x20AC;&amp;#x2122;s chefs mingle with guests in the dining room and offer taste recommendations. Feria&#39;s culinary team boasts chefs from Italy, China, Korea and the Philippines, all carefully preparing authentic dishes from their respective countries.

For the best of both stunning beaches and city attractions, stay at the five-star Radisson Blu Hotel Cebu, ideally situated in the heart of the city near the International Port and scenic beaches. Pick from our wide range of room types like Superior Rooms, Business Class and Executive Suites, featuring such deluxe amenities as Free high-speed, wireless Internet, down pillows and duvets. Sample delicious Chinese, Korean, Filipino and Italian cuisine at Feria, the hotel&#39;s on-site restaurant. Jump-start your day with the expansive Super Breakfast Buffet each morning.

Unwind in the relaxing spa, take a dip in the 800-square-metre, free-form swimming pool and stay connected in the convenient Business Club Lounge

An oasis in the middle of the Cebu cityscape, the Pool Bar sits beside an 800-square-metre, free-form pool and delights guests with fresh seafood and an extensive selection of signature cocktails and classic drinks. Complement your delicious beverages with a variety of international dishes from the kitchen. The Pool Bar comfortably seats 60 guests and provides Free high-speed, wireless Internet access.

Overall chairperson for this year’s Manila Best Dressed Awards was Karr Marin. The event was hosted by Ryan Tercero and Directed by Ogie Atos.

f her life is encapsulated in a montage sequence, Julia Roberts with her broad smile and unbridled optimism would have perfectly played the part of Michelle Lucas. The story of Michelle on film will cross fade to these scenes of her life while the Chariots of Fire theme score plays in the background: a child touching the first Polaroid cameras of her father, a spectacular sunset view in her family homeâ&amp;#x20AC;&amp;#x2122;s roof deck and siblings falling off a bike and into a creek; a teenager in a car collision with a light post during her junior high school; a college student not passing Organic Chemistry in Pre-Med, transferring to Interior Design and getting her first pay-check while in school; a woman landing a high-paying job after college, giving birth to her children, supporting them and watching them grow; a woman travelling around Asia and the US; a woman starting up a business, failing in marriage and business, burning bridges with difficult people, rising every time she falls, and in the end getting the work done with recognition and flourishing in life and business. At 36, Michelle has persevered and thrived with her faith in the Almighty, her never-saydie attitude and artistic talent. Her three wonderful children are her source of inspiration. With her handson parenting for her brood, she is happy to note that her children excel in Academics, Visual Arts, Music and Sports. Michelle also draws motivation from the late president Corazon Aquino for her class and courage, Oprah Winfrey for her tact and ingenuity, Mother Theresa for her divine inspiration, Nelson Mandela for his neutrality and impartiality and Steve Jobs for his brilliance and transformational leadership skills. She can paint what she imagines and this knack for breathing life to ideas proves to be an added advantage whenever she engages with clients. Her clients are satisfied with the full execution of the interior design from the original concepts.

A go-getter, Michelle often gets big responsibilities in her personal, social and business circle. She manages all the spheres of her life with grace and gratitude. In her spare time, she enjoys traveling to Hong Kong, Singapore, Japan and Bangkok for shopping, leisure, rest and recreation. She also relishes the exquisite cuisine, lifestyle and interior designs in L.A., Las Vegas and Texas. As a fitting denouement to the movie-like impression of her colorful life, Michelle renders meaning to it with a passion for creating abundance steeped in spiritual principles. 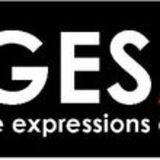