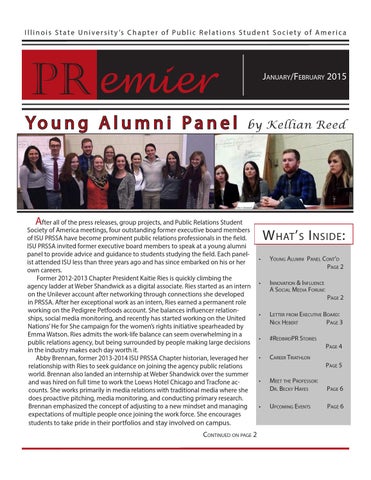 fter all of the press releases, group projects, and Public Relations Student Society of America meetings, four outstanding former executive board members of ISU PRSSA have become prominent public relations professionals in the field. ISU PRSSA invited former executive board members to speak at a young alumni panel to provide advice and guidance to students studying the field. Each panelist attended ISU less than three years ago and has since embarked on his or her own careers. Former 2012-2013 Chapter President Kaitie Ries is quickly climbing the agency ladder at Weber Shandwick as a digital associate. Ries started as an intern on the Unilever account after networking through connections she developed in PRSSA. After her exceptional work as an intern, Ries earned a permanent role working on the Pedigree Petfoods account. She balances influencer relationships, social media monitoring, and recently has started working on the United Nations’ He for She campaign for the women’s rights initiative spearheaded by Emma Watson. Ries admits the work-life balance can seem overwhelming in a public relations agency, but being surrounded by people making large decisions in the industry makes each day worth it. Abby Brennan, former 2013-2014 ISU PRSSA Chapter historian, leveraged her relationship with Ries to seek guidance on joining the agency public relations world. Brennan also landed an internship at Weber Shandwick over the summer and was hired on full time to work the Loews Hotel Chicago and Tracfone accounts. She works primarily in media relations with traditional media where she does proactive pitching, media monitoring, and conducting primary research. Brennan emphasized the concept of adjusting to a new mindset and managing expectations of multiple people once joining the work force. She encourages students to take pride in their portfolios and stay involved on campus.