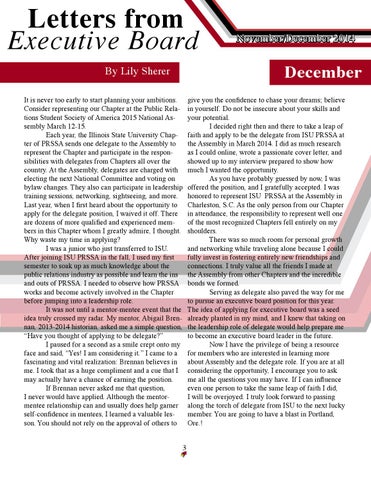 Letters from Executive Board By Lily Sherer It is never too early to start planning your ambitions. Consider representing our Chapter at the Public Relations Student Society of America 2015 National Assembly March 12-15. Each year, the Illinois State University Chapter of PRSSA sends one delegate to the Assembly to represent the Chapter and participate in the responsibilities with delegates from Chapters all over the country. At the Assembly, delegates are charged with electing the next National Committee and voting on bylaw changes. They also can participate in leadership training sessions, networking, sightseeing, and more. Last year, when I first heard about the opportunity to apply for the delegate position, I waived it off. There are dozens of more qualified and experienced members in this Chapter whom I greatly admire, I thought. Why waste my time in applying? I was a junior who just transferred to ISU. After joining ISU PRSSA in the fall, I used my first semester to soak up as much knowledge about the public relations industry as possible and learn the ins and outs of PRSSA. I needed to observe how PRSSA works and become actively involved in the Chapter before jumping into a leadership role. It was not until a mentor-mentee event that the idea truly crossed my radar. My mentor, Abigail Brennan, 2013-2014 historian, asked me a simple question, “Have you thought of applying to be delegate?” I paused for a second as a smile crept onto my face and said, “Yes! I am considering it.” I came to a fascinating and vital realization: Brennan believes in me. I took that as a huge compliment and a cue that I may actually have a chance of earning the position. If Brennan never asked me that question, I never would have applied. Although the mentormentee relationship can and usually does help garner self-confidence in mentees, I learned a valuable lesson. You should not rely on the approval of others to

give you the confidence to chase your dreams; believe in yourself. Do not be insecure about your skills and your potential. I decided right then and there to take a leap of faith and apply to be the delegate from ISU PRSSA at the Assembly in March 2014. I did as much research as I could online, wrote a passionate cover letter, and showed up to my interview prepared to show how much I wanted the opportunity. As you have probably guessed by now, I was offered the position, and I gratefully accepted. I was honored to represent ISU PRSSA at the Assembly in Charleston, S.C. As the only person from our Chapter in attendance, the responsibility to represent well one of the most recognized Chapters fell entirely on my shoulders. There was so much room for personal growth and networking while traveling alone because I could fully invest in fostering entirely new friendships and connections. I truly value all the friends I made at the Assembly from other Chapters and the incredible bonds we formed. Serving as delegate also paved the way for me to pursue an executive board position for this year. The idea of applying for executive board was a seed already planted in my mind, and I knew that taking on the leadership role of delegate would help prepare me to become an executive board leader in the future. Now I have the privilege of being a resource for members who are interested in learning more about Assembly and the delegate role. If you are at all considering the opportunity, I encourage you to ask me all the questions you may have. If I can influence even one person to take the same leap of faith I did, I will be overjoyed. I truly look forward to passing along the torch of delegate from ISU to the next lucky member. You are going to have a blast in Portland, Ore.! 3