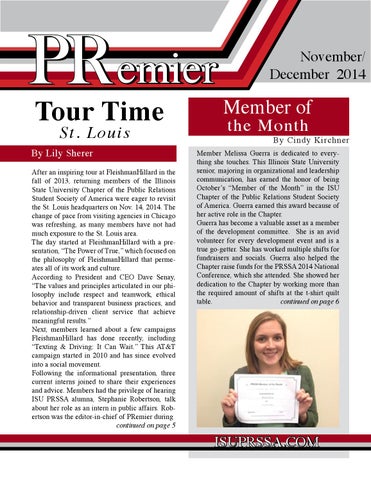 After an inspiring tour at FleishmanHillard in the fall of 2013, returning members of the Illinois State University Chapter of the Public Relations Student Society of America were eager to revisit the St. Louis headquarters on Nov. 14, 2014. The change of pace from visiting agencies in Chicago was refreshing, as many members have not had much exposure to the St. Louis area. The day started at FleishmanHillard with a presentation, “The Power of True,” which focused on the philosophy of FleishmanHillard that permeates all of its work and culture. According to President and CEO Dave Senay, “The values and principles articulated in our philosophy include respect and teamwork, ethical behavior and transparent business practices, and relationship-driven client service that achieve meaningful results.” Next, members learned about a few campaigns FleishmanHillard has done recently, including “Texting & Driving: It Can Wait.” This AT&T campaign started in 2010 and has since evolved into a social movement. Following the informational presentation, three current interns joined to share their experiences and advice. Members had the privilege of hearing ISU PRSSA alumna, Stephanie Robertson, talk about her role as an intern in public affairs. Robertson was the editor-in-chief of PRemier during continued on page 5

Member of the Month

Member Melissa Guerra is dedicated to everything she touches. This Illinois State University senior, majoring in organizational and leadership communication, has earned the honor of being October’s “Member of the Month” in the ISU Chapter of the Public Relations Student Society of America. Guerra earned this award because of her active role in the Chapter. Guerra has become a valuable asset as a member of the development committee. She is an avid volunteer for every development event and is a true go-getter. She has worked multiple shifts for fundraisers and socials. Guerra also helped the Chapter raise funds for the PRSSA 2014 National Conference, which she attended. She showed her dedication to the Chapter by working more than the required amount of shifts at the t-shirt quilt table. continued on page 6