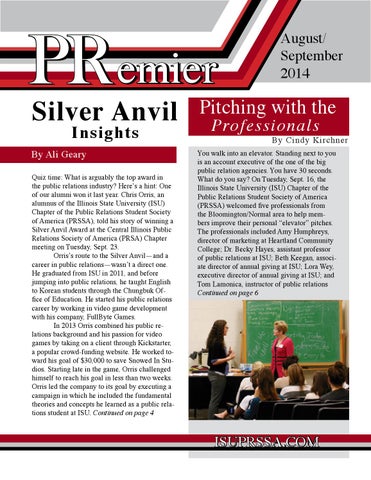 By Ali Geary Quiz time: What is arguably the top award in the public relations industry? Here’s a hint: One of our alumni won it last year. Chris Orris, an alumnus of the Illinois State University (ISU) Chapter of the Public Relations Student Society of America (PRSSA), told his story of winning a Silver Anvil Award at the Central Illinois Public Relations Society of America (PRSA) Chapter meeting on Tuesday, Sept. 23. Orris’s route to the Silver Anvil—and a career in public relations—wasn’t a direct one. He graduated from ISU in 2011, and before jumping into public relations, he taught English to Korean students through the Chungbuk Office of Education. He started his public relations career by working in video game development with his company, FullByte Games. In 2013 Orris combined his public relations background and his passion for video games by taking on a client through Kickstarter, a popular crowd-funding website. He worked toward his goal of $30,000 to save Snowed In Studios. Starting late in the game, Orris challenged himself to reach his goal in less than two weeks. Orris led the company to its goal by executing a campaign in which he included the fundamental theories and concepts he learned as a public relations student at ISU. Continued on page 4

Pitching with the Professionals

You walk into an elevator. Standing next to you is an account executive of the one of the big public relation agencies. You have 30 seconds. What do you say? On Tuesday, Sept. 16, the Illinois State University (ISU) Chapter of the Public Relations Student Society of America (PRSSA) welcomed five professionals from the Bloomington/Normal area to help members improve their personal “elevator” pitches. The professionals included Amy Humphreys, director of marketing at Heartland Community College; Dr. Becky Hayes, assistant professor of public relations at ISU; Beth Keegan, associate director of annual giving at ISU; Lora Wey, executive director of annual giving at ISU; and Tom Lamonica, instructor of public relations Continued on page 6