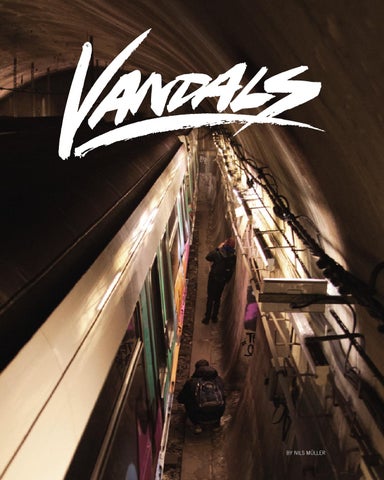 If the book in your hands has a black canvas-cover with only a logo print on the front, you are the proud owner of a limited special edition. This special edition is without ISBN. All rights reserved. No part of this publication may be reproduced, stored in any retrieval or transmitted, in any form or by any means, electronic, mechanical, photocopying, recording or otherwise, without prior permission in writing from the publisher or the editor. Publikat is documenting the development of the worldwide graffiti scene. Our intention is to show the artistic aspect of graffiti in full range. Please note that we don‘t appeal to do criminal activities in any form. Named articles do not necessarily correspond to the meaning of the publisher. Printed and bound in China.

Whether targeting members of the subculture or passersby, it seems there is no way of avoiding graffiti these days. It’s on the streets, in advertisements – companies use it as brand communication – on CD covers, in fashion, in movies, in TV, on websites, blogs, and social media, as well as in books, newspapers and magazines. It is no longer a question whether graffiti is part of our socioculture. Its visibility may give it importance, but it helps integration, too. And it is graffiti – a movement that hovers between unlawful and lawful expression – that needs analysis, both to explain its logic and to classify its semiotic and semantic value. Graffiti has long been widely discussed and debated in media. Its terminology has been encoded, its different styles defined. Whether practitioners prefer to be labelled writers or sprayers, they are now styled as artists as well. By contrast, little is known about train writing, the supreme discipline of graffiti. That is perhaps down to two facts. First, train writers have to remain extremely restrained and anonymous to escape penalty. Secondly, painted trains are often immobilized or cleaned before going back into circulation. The chance of glimpsing a painted train is therefore slim; glimpsing the act of vandalism is even rarer. Vandals, however, dives into the hidden world of illegality to portray the anonymous train writing scene from the inside. It reveals that each act of train writing is a mission to accomplish. It begins with finding the right spot, planning the way in and out without getting noticed, managing barbwire, fences, walls, locked emergency exits, motion detectors, observation cameras, security guards, and many more barriers to cheat the system. But who are these people going through so much effort to create something that eventually goes unnoticed? Well, they are people who live life within the confines of society. And it is precisely this conflict that fascinates German photographer Nils Müller. Müller is a former graffiti artist who taught himself photography in order to immortalize his work. It wasn’t long before he realized he wanted to show more than just the defacement of public structures. Müller shows the artistry, fearlessness, and agility of the vandals themselves. He elevates train writing into a sophisticated visual language that thrills both for its illicit nature and aesthetic value.

Behind a smooth surface While New York is indeed striving to be safe and modern, parts of the city still reveal glimpses of a much edgier era, one that preceded the clean-up campaigns of several mayors and the consequences of 9/11. While being superficially pristine, the city has not lost its charming heart, hidden nowhere more so than inside the tunnels of its metro. In fact, they serve as the most authentic kind of underground museum, a showcase of cave paintings offering the legacy of generations of graffiti artists. Markings originating from the early 1980s – to name but a few – such as those by Futura 2000, Revolt, Haze, one of my favorite style-writers Skeme, and the Vandal Squad are immortalized down in the bowels of the city. You see tags, throw-ups and even pieces. It is an unforgettable journey back in time. The history of the New York metro itself is equally impressive. The Metropolitan Transportation Authority, better known as the MTA or TA, is one of the world’s oldest railway networks. Opened in October 1904, it is one of the longest and most complex systems today: 468 stations, 337 kilometers of route length, 1355 kilometers of total track length, 7500 subway cars, transporting around 5 million passengers a day. It goes without saying that I have been documenting how some of the subways got spray painted. Two actions were so remarkable, they felt like a scene from the wrong movie. In both situations, police presence was stronger than usual. The first was down to the execution of America’s latest public enemy number one – inside the tunnel, we were tensed up more than usual. The second was because it was New Year’s Eve. About ten police cars were heading straight to the gas station where we wanted to buy two bottles of beer to toast to a successful action and the new year. When officers arrived and got out of their cars, we thought we got busted. But instead of investigating us, they called out a happy new year to each other and enjoyed their well-deserved break. Phew! Being attentive both under and above ground, I train my lens for moments that can easily remain unnoticed. Paradoxically, graffiti remains a form of vandalism while increasingly being considered an art form too. Just as odd are the New Yorkers who escaped being tarred with the brush of globalization and assimilation. For instance, the American Indian, who walks amidst the modern city while conveying the sense of living in the past.