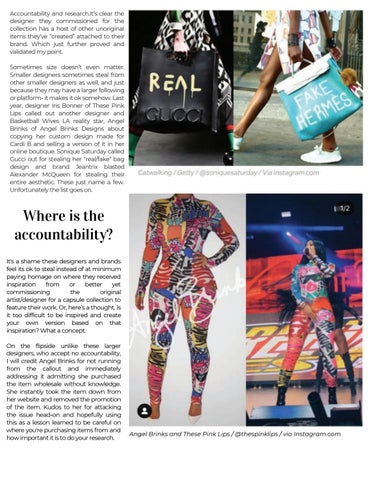 Accountability and research.It’s clear the designer they commissioned for the collection has a host of other unoriginal items they’ve “created” attached to their brand. Which just further proved and validated my point. Sometimes size doesn’t even matter. Smaller designers sometimes steal from other smaller designers as well, and just because they may have a larger following or platform- it makes it ok somehow. Last year, designer Iris Bonner of These Pink Lips called out another designer and Basketball Wives LA reality star, Angel Brinks of Angel Brinks Designs about copying her custom design made for Cardi B and selling a version of it in her online boutique. Sonique Saturday called Gucci out for stealing her "real/fake" bag design and brand Jeantrix blasted Alexander McQueen for stealing their entire aesthetic. These just name a few. Unfortunately the list goes on.

Where is the accountability? It's a shame these designers and brands feel its ok to steal instead of at minimum paying homage on where they received inspiration from or better yet commissioning the original artist/designer for a capsule collection to feature their work. Or, here’s a thought. Is it too difficult to be inspired and create your own version based on that inspiration? What a concept. On the flipside unlike these larger designers, who accept no accountability, I will credit Angel Brinks for not running from the callout and immediately addressing it admitting she purchased the item wholesale without knowledge. She instantly took the item down from her website and removed the promotion of the item. Kudos to her for attacking the issue head-on and hopefully using this as a lesson learned to be careful on where you're purchasing items from and how important it is to do your research.

Angel Brinks and These Pink Lips / @thespinklips / via Instagram.com 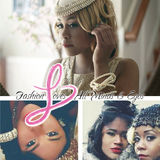