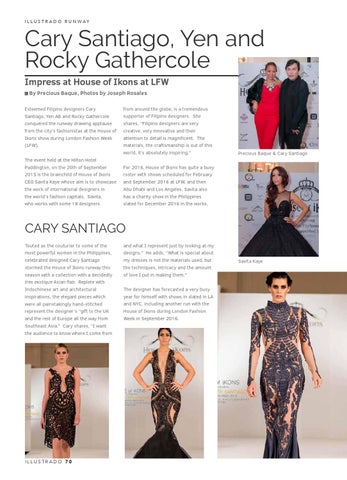 from around the globe, is a tremendous

supporter of Filipino designers. She

from the city’s fashionistas at the House of

creative, very innovative and their

attention to detail is magnificent. The

materials, the craftsmanship is out of this world, it’s absolutely inspiring.”

The event held at the Hilton Hotel Paddington, on the 20th of September

2015 is the brainchild of House of Ikons

roster with shows scheduled for February

CEO Savita Kaye whose aim is to showcase

the work of international designers in

has a charity show in the Philippines

who works with some 18 designers

slated for December 2016 in the works.

CARY SANTIAGO Touted as the couturier to some of the

and what I represent just by looking at my

most powerful women in the Philippines,

designs.” He adds, “What is special about

my dresses is not the materials used, but

stormed the House of Ikons runway this

the techniques, intricacy and the amount

season with a collection with a decidedly

of love I put in making them.”

The designer has forecasted a very busy

inspirations, the elegant pieces which

year for himself with shows in slated in LA

were all painstakingly hand-stitched

and NYC, including another run with the

represent the designer’s “gift to the UK

House of Ikons during London Fashion

and the rest of Europe all the way from

Southeast Asia.” Cary shares, “I want the audience to know where I come from 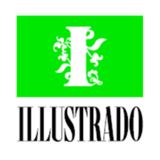