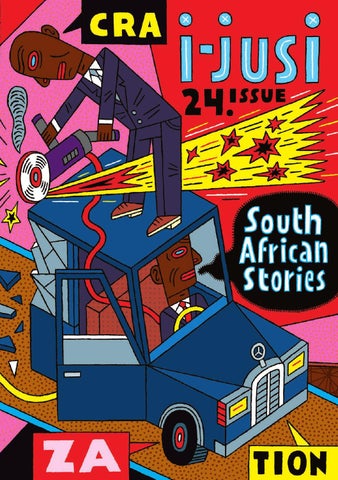 COPYRIGHT © Orange Juice Design 2007 • Reproduction in whole or in part of any contents of i-jusi without prior written permission from the publisher is strictly prohibited. The publisher does not accept responsibility for images or statements expressed by contributors.

ANTON KANNEMEYER: Pappa in Africa * Translation of comic strip page 30 and 31 WATCH OUT, DUDE! Boo hoo ... The black man he came ... he put his pistol against my head,** I was afraid! Then the black man stole my car... Maybe you should do as J.M. Coetzee did and emigrate. A few days later... Peekaboo! ** "Meatfringe" has no connection - Kuifie is the Afrikaans version of Tintin; Vleiskuif is what we used to call bald teachers at school

On Book Covers, Love and Danger... By Travis Lyle ‘Don’t judge a book by its cover.’ Hmmm. Not so sure about these hoary old chestnuts. Some of them have led me down the garden path and up Shit Creek. May be best to let sleeping metaphors lie. Some covers bear only the most tenuous relation to their contents. Take, for example, one of my ex-girlfriends, The Russian. Now there’s a solid case for judging cases on individual merit if ever there was one. Gorgeous, jaw-droppingly so, but quite a modest dresser. So she looks normal (in the vein of prim librarian fantasies), but take it from me - crazy as a sack of Ghanaian Squirrel Rats after a hard week’s float on a barge in the blazing sun of the Niger Delta. Barking. You take her to Umhlanga for a quiet dip at the beach, turn away for a moment, and…'where the hell? Ah, there she is, frolicking through the tidal pools, buck-naked, past a little kid who’s going: ‘Mum, Mum - that lady has got dingises through her numbies. Caroline doesn’t have those...’ Further down the beach is a mama in ZCC getup collecting seawater, going ‘Aibo!’ Took the words right outta my mouth. Crazy. But apparently it’s quite normal when you’re sat at your dacha outside St Petersburg, taking in the summer sun. Umhlanga? May look like an easy-going holiday town, but the tannies will have you locked up in a…um, flash. Books and covers once more. Amongst many other things, she introduced me to one of the greatest books I’ve ever read – ‘The Master and Marguerite’ by Bulgakov. Now, in terms of books and covers, this simply had a picture of a black cat on the cover. This says very little of the story, which, it must be said, is one of the greatest ever written. Outline: the Devil visits Moscow with his denizens; Marguerite seeks to be reunited with her incarcerated beau with the Devil’s help, and a fresh take on Pontius Pilates’ crucifixion of Yeshau ha Nostri aka Jesus, all of which adds up to a satirical take on Russia under Stalin. All in all a wild read but I had, up until that point, never heard of it. Banned, you see, for something like thirty years. Might not have noticed it if it hadn’t been draped over her pert Tartarstani ass. ‘What’s it about?’ I asked. ‘Ze black pussycat and goot and evil. Luff and danger. Like me.’ she purred. Fair enough, so she was dangerous. How was I to know? Judge a book by its cover? Once bitten, twice shy.

Pale Crocodile Waiting By Lauren Beukes They say people start to resemble their animals. But that’s only if you don’t take care. If you let yourself go. Zinzi peels out of bed, leaving Lionel still snarled in the sheets, his calloused feet sticking off the end of the mattress. He walked here from Lagos, him and the Mongoose, which is sitting prim and alert at the keyboard of the battered laptop with its tiki-tavi claws, downloading mail, because who knows what phish may have nibbled on their electronic lures in the night. The mongoose ignores Zinzi as she pads over to the cupboard. Calling it a cupboard is optimistic, like calling this dank room with its canting floor and intermittent plumbing an apartment is optimistic. But then Happy Mansions was condemned eight months ago already. Every day, she expects to be woken by the tromp of the Red Ants up the stairs, with their bullhorns and sledgehammers and pepper spray. Zinzi eases aside the curtain, that separates her secondhand stash of clothes – and Sloth, of course, clinging to the metal pole – from the waxy light streaking through the narrow window, the sulphur colour of the mine dumps. Sloth blinks drowsily up at her. He’s not good at mornings. The green fungal smell of him that clings to his fur and his mossy claws is earthy and clean compared to the cloying choke of asbestos and black mould of the flat. She hefts Sloth onto her back, tugging the familiar weight of his long downy arms over her shoulders, like a backpack. This is old routine. He fusses and shifts and finally settles, his talons resting lightly on her shoulders. She relaxes. Perhaps there will be nothing to be found today. Nothing to deliver. But then, Sloth tightens his grip on her right shoulder, so his claws dig painfully into her collarbone. ‘Easy, tiger’ she says. It would have been easier to have a tiger, perhaps. As if she had a choice. She heads out the door, Sloth driving her like a Zinzi motorbike, clenching his claws on her shoulders, left, right, right again. The Message is not so hard to find. It’s in a gutter on Jeppe street, buried in leaves damp from last night’s storm and a tangle of urban decay, a used condom, a Simba packet turned inside out. The brooch is junk. A perspex jade set in nouveau curlicues of copper surrounded by paste diamonds. One is missing. Folding her fingers over it, Zinzi feels a surge of nauseous agitation. A bad Message then. Sometimes she doesn’t know. Sometimes it’s only when she hands the Message over to the Owner and she sees their face that she can tell that it’s good or bad. Never indifferent. The dead don’t need to communicate indifferent. She can already feel the pull. She doesn’t need Sloth for this. The Message steers her towards Little Angola, towards the market between the taxi ranks. She doesn’t notice the pale woman with her thinning blonde hair and the marabou perched on her shoulders like angel wings or the primly dressed man with the maltese in his arms. When Zinzi is in the grips of a Message, she doesn’t notice anything at all. But they notice her. 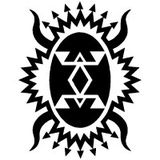