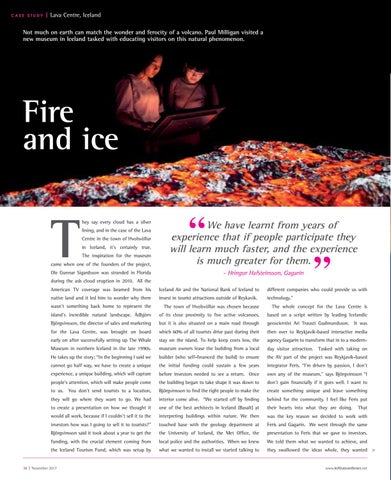 Not much on earth can match the wonder and ferocity of a volcano. Paul Milligan visited a new museum in Iceland tasked with educating visitors on this natural phenomenon.

hey say every cloud has a silver

came when one of the founders of the project,

We have learnt from years of experience that if people participate they will learn much faster, and the experience is much greater for them.

lining, and in the case of the Lava Centre in the town of Hvolsvöllur in Iceland, it’s certainly true. The inspiration for the museum

during the ash cloud eruption in 2010. All the American TV coverage was beamed from his

Iceland Air and the National Bank of Iceland to

different companies who could provide us with

native land and it led him to wonder why there

invest in tourist attractions outside of Reykavik.

wasn’t something back home to represent the

The town of Hvolsvöllur was chosen because

The whole concept for the Lava Centre is

of its close proximity to ﬁve active volcanoes,

based on a script written by leading Icelandic

Björgvinsson, the director of sales and marketing

but it is also situated on a main road through

geoscientist Ari Trausti Gudmundsson. It was

for the Lava Centre, was brought on board

which 60% of all tourists drive past during their

then over to Reykjavík-based interactive media

early on after successfully setting up The Whale

stay on the island. To help keep costs low, the

agency Gagarin to transform that in to a modern-

Museum in northern Iceland in the late 1990s.

museum owners lease the building from a local

He takes up the story; “In the beginning I said we

builder (who self-ﬁnanced the build) to ensure

the AV part of the project was Reykjavík-based

cannot go half way, we have to create a unique

the initial funding could sustain a few years

experience, a unique building, which will capture

before investors needed to see a return. Once

own any of the museum,” says Björgvinsson “I

the building began to take shape it was down to

don’t gain ﬁnancially if it goes well. I want to

to us. You don’t send tourists to a location,

Björgvinsson to ﬁnd the right people to make the

they will go where they want to go. We had

interior come alive. “We started off by ﬁnding

behind for the community. I feel like Feris put

to create a presentation on how we thought it

one of the best architects in Iceland (Basalt) at

their hearts into what they are doing.

would all work, because if I couldn’t sell it to the

interpreting buildings within nature. We then

was the key reason we decided to work with

investors how was I going to sell it to tourists?”

touched base with the geology department at

Feris and Gagarin. We went through the same

Björgvinsson said it took about a year to get the

the University of Iceland, the Met Ofﬁce, the

presentation to Feris that we gave to investors.

funding, with the crucial element coming from

local police and the authorities. When we knew

We told them what we wanted to achieve, and

the Iceland Tourism Fund, which was setup by

what we wanted to install we started talking to

they swallowed the ideas whole, they wanted &gt;

Tasked with taking on

&gt; to create something unique too. From the very beginning they were fully on board, and quickly came up with creative solutions on how we could realise all the ideas we had in our minds.” Hringur

Gagarin, was keen for visitors to be immersed in the exhibition from the off.

very ﬁrst exhibit, we have sensors with triggered

We want to be the centre for information when the next eruption happens, we want people to come here to learn what to do when you have an eruption. - Ádbjörn Björgvinsson, Lava Centre

sound, so that you become a part of it. From

On entering the Volcano Corridor you are met

difﬁcult to do because the 4K projector had an

there we tried to make every exhibit interactive,

by lighting jutting out of the wall. The specially

aspect ratio of 16:9, and the ceiling height was

so you are in control. We have learnt from years

designed pieces of wood (each home to 3 LEDs)

low, so the selection of lenses made it difﬁcult to

of experience that if people participate they will

represent a timeline of eruptions in Iceland. The

ﬁnd the correct distance from the lamps, so we

learn much faster, and the experience is much

LED effects are being driven by Raspberry Pi’s

had to use a mirror again to cover the distance.”

connected via the network to one PC.

Visitors to the Lava Centre are greeted in the

The Creation of Iceland room features a giant

foyer by a large table showing the seismic activity

metal rail with a projected dome surface inside

opposite the screen. By standing on one of three

real-time data. The map is produced by two

the images is hidden above). When users move

chosen spots the ﬂoor begins to rumble (driven by a

the rail a black/white pattern (printed on the

underside of the rail) triggers a sensor which

communicates from a nearby PC to the dome.

appears on the screen in front of each spot.

By turning the wheel visitors learn that Iceland

The next sensation for visitors is found in the

via bespoke mirrors (something

was created when tectonic-plates drifted over a

Earthquake Corridor, where an erupting volcano

Feris had to commission after

stationary Mantle plume that lies underneath the

is relayed via a wildly vibrating ﬂoor. In another

innovative use of AV technology, instead of using

idea of the projectors pointing

that having multiple people wanting to turn the

wheel at the same time would turn it in to a

screens accompany the table to

battle, “but in reality it has been just like any

ﬁtted on the X and Y axle of a wooden platform,

other human behaviour, if you enter a room full

these are driven by two Powersoft M-Drive

of people they instantly give you attention, they

give you space, and even create a dialogue.”

response to the earthquake audio ﬁle. Under the

To take in the full show, which takes around 30 minutes must

This exhibit had been in the plans for the

venue since the very beginning, but also created

and four rooms, all ﬁlled with a

a number of issues for Feris, as the company’s

platform sits a Danley DTS10 sub, which is used to create a deep audio rumble. The next section called The Mantle Plume is centred on a 12-metre tall sculpture.

proved to be the biggest challenge for Feris, as

features 270-degree projection, with the total

it involved the arduous and time-consuming

install (by hand) of 1.3km of NeoPixel LEDs. The

fed into the NION n3 unit for processing and

exterior of the plume is a thin, stretchy material

level management. The 7.1 cinema system is

created especially by a British tailor, but it was

of Iceland room, there are ﬁve interactive spots

processed and managed by the NION, control of

the interior, where the LEDs are held together

around the room, at each one visitors point to

this takes place over a Kiosk GUI and in addition

with a wire mesh, that caused headaches. “It

a Crestron system has access to all user controls,

was a mammoth task,” says Kristinsson, “It took

A Microsoft Kinect sensor, housed in a small

one month to attach the LEDs as we couldn’t

box on the ﬂoor, facilitates the gesture control.

glue them because of the heat, so we had to

At each touch point there is also a directional

visitors in its ﬁrst three months of opening. An

extension of the site has already been discussed,

the sculpture is by Raspberry Pi’s and Teensy

content is based on all the volcanoes near to

and there is also the possibility of using the roof

as a viewing platform for the Northern Lights,

with Gagarin providing the programming of

with some of its own photos and composed a

and offering the venue for private hire in the

the controllable LEDs in the sculpture.

evenings. “My vision is that we expand it in

create the animation, which is shown in a 10-min

they have to pass the Magma Corridor, a space full

cycle ending with an eruption.

Björgvinsson. “We want to be the centre for

of mist and eerie atmospheric

The ﬁnal piece of content is found inside the

information when the next eruption happens, we

cinema room (which doubles as a presentation space),

want people to come here to learn what to do

when you have an eruption. We don’t want to

shining on a 6.3x3.6-metre Stewart Filmscreen

meet expectations, we want to exceed them, that

and a clever control system.

is the key to the future success of this project”.

The whole screen is touchenabled but Feris has installed

a U-shaped slider at the side

of each screen, so the main

As you slide your ﬁnder down

from the top of the U the video

and audio changes in time to your touch. To make it to the next room you have to travel through

the Tephra Corridor, which

effect of falling ash. The next

How iiyama' s screens support the education of visitors. 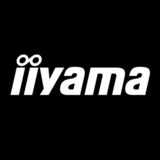