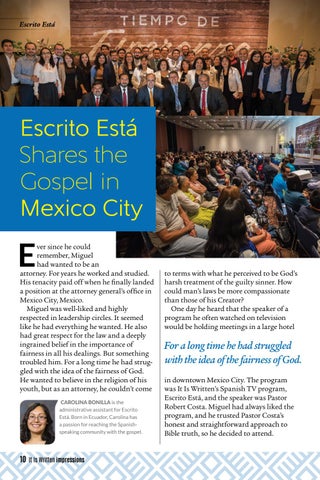 ver since he could remember, Miguel had wanted to be an attorney. For years he worked and studied. His tenacity paid off when he finally landed a position at the attorney general’s office in Mexico City, Mexico. Miguel was well-liked and highly respected in leadership circles. It seemed like he had everything he wanted. He also had great respect for the law and a deeply ingrained belief in the importance of fairness in all his dealings. But something troubled him. For a long time he had struggled with the idea of the fairness of God. He wanted to believe in the religion of his youth, but as an attorney, he couldn’t come CAROLINA BONILLA is the administrative assistant for Escrito Está. Born in Ecuador, Carolina has a passion for reaching the Spanishspeaking community with the gospel.

It Is Written impressions

to terms with what he perceived to be God’s harsh treatment of the guilty sinner. How could man’s laws be more compassionate than those of his Creator? One day he heard that the speaker of a program he often watched on television would be holding meetings in a large hotel

For a long time he had struggled with the idea of the fairness of God. in downtown Mexico City. The program was It Is Written’s Spanish TV program, Escrito Está, and the speaker was Pastor Robert Costa. Miguel had always liked the program, and he trusted Pastor Costa’s honest and straightforward approach to Bible truth, so he decided to attend. 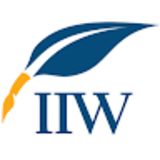 It Is Written, Inc