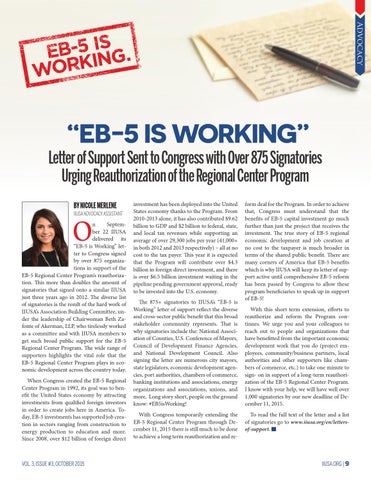 investment has been deployed into the United States economy thanks to the Program. From 2010-2013 alone, it has also contributed $9.62 billion to GDP and $2 billion to federal, state, and local tax revenues while supporting an average of over 29,300 jobs per year (41,000+ in both 2012 and 2013 respectively) – all at no cost to the tax payer. This year it is expected that the Program will contribute over $4.3 billion in foreign direct investment, and there is over $6.5 billion investment waiting in the pipeline pending government approval, ready to be invested into the U.S. economy. The 875+ signatories to IIUSA’s “EB-5 is Working” letter of support reflect the diverse and cross-sector public benefit that this broad stakeholder community represents. That is why signatories include the: National Association of Counties, U.S. Conference of Mayors, Council of Development Finance Agencies, and National Development Council. Also signing the letter are numerous city mayors, state legislators, economic development agencies, port authorities, chambers of commerce, banking institutions and associations, energy organizations and associations, unions, and more. Long story short, people on the ground know: #EB5isWorking! With Congress temporarily extending the EB-5 Regional Center Program through December 11, 2015 there is still much to be done to achieve a long term reauthorization and re-

form deal for the Program. In order to achieve that, Congress must understand that the benefits of EB-5 capital investment go much further than just the project that receives the investment. The true story of EB-5 regional economic development and job creation at no cost to the taxpayer is much broader in terms of the shared public benefit. There are many corners of America that EB-5 benefits which is why IIUSA will keep its letter of support active until comprehensive EB-5 reform has been passed by Congress to allow these program beneficiaries to speak up in support of EB-5! With this short term extension, efforts to reauthorize and reform the Program continues. We urge you and your colleagues to reach out to people and organizations that have benefitted from the important economic development work that you do (project employees, community/business partners, local authorities and other supporters like chambers of commerce, etc.) to take one minute to sign- on in support of a long-term reauthorization of the EB-5 Regional Center Program. I know with your help, we will have well over 1,000 signatories by our new deadline of December 11, 2015. To read the full text of the letter and a list of signatories go to www.iiusa.org/en/lettersof-support.