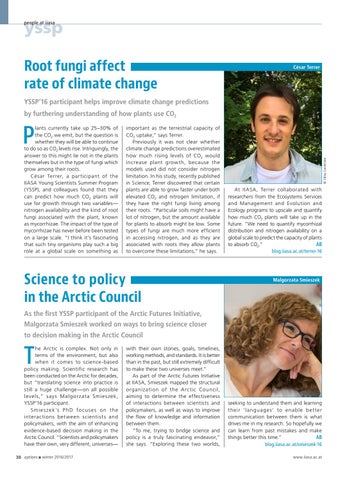 lants currently take up 25–30% of the CO2 we emit, but the question is whether they will be able to continue to do so as CO2 levels rise. Intriguingly, the answer to this might lie not in the plants themselves but in the type of fungi which grow among their roots. César Terrer, a par ticipant of the IIASA Young Scientists Summer Program (YSSP), and colleagues found that they can predict how much CO2 plants will use for growth through two variables— nitrogen availability and the kind of root fungi associated with the plant, known as mycorrhizae. The impact of the type of mycorrhizae has never before been tested on a large scale. “I think it’s fascinating that such tiny organisms play such a big role at a global scale on something as

important as the terrestrial capacity of CO2 uptake,” says Terrer. Previously it was not clear whether climate change predictions overestimated how much rising levels of CO2 would increase plant grow th, because the models used did not consider nitrogen limitation. In his study, recently published in S cience, Terrer discovered that certain plants are able to grow faster under both elevated CO2 and nitrogen limitation, if they have the right fungi living among their roots. “Particular soils might have a lot of nitrogen, but the amount available for plants to absorb might be low. Some types of fungi are much more efficient in accessing nitrogen, and as they are associated with roots they allow plants to overcome these limitations,” he says.

by furthering understanding of how plants use CO2

At IIASA, Terrer collaborated with researchers from the Ecosystems Services and Management and Evolution and Ecology programs to upscale and quantify how much CO2 plants will take up in the future. “We need to quantify mycorrhizal distribution and nitrogen availability on a global scale to predict the capacity of plants to absorb CO2.”  AB blog.iiasa.ac.at/terrer-16

As the first YSSP participant of the Arctic Futures Initiative, Malgorzata Smieszek worked on ways to bring science closer to decision making in the Arctic Council

he Arctic is complex. Not only in terms of the environment, but also when it comes to science‑based policy making. Scientific research has been conducted on the Arctic for decades, but “translating science into practice is still a huge challenge—on all possible levels,” s ay s Malg or z at a Smie s zek, YSSP’16 participant. S m i e s z e k ’s P h D f o c u s e s o n t h e interac tions bet ween scientist s and policymakers, with the aim of enhancing evidence‑based decision making in the Arctic Council. “Scientists and policymakers have their own, very different, universes—

with their own stories, goals, timelines, working methods, and standards. It is better than in the past, but still extremely difficult to make these two universes meet.” As part of the Arctic Futures Initiative at IIASA, Smieszek mapped the structural organization of the A rc tic Council, aiming to determine the effectiveness of interactions between scientists and policymakers, as well as ways to improve the flow of knowledge and information between them. “To me, trying to bridge science and policy is a truly fascinating endeavor,” she says. “Exploring these two worlds,

seeking to understand them and learning t h e ir ‘la ngua g e s’ to e na b l e b e t te r communication between them is what drives me in my research. So hopefully we can learn from past mistakes and make things better this time.”  AB blog.iiasa.ac.at/smieszek-16 www.iiasa.ac.at

Options Magazine presents IIASA and its latest research for a non-specialist audience. 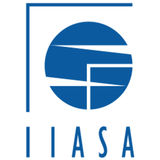