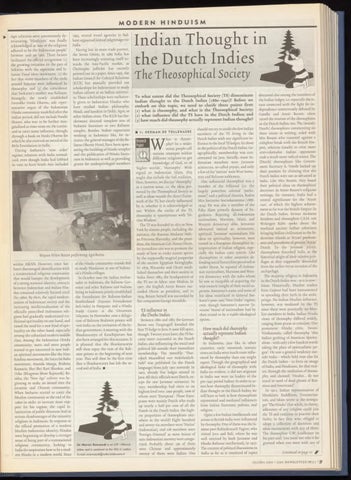 MODERN eign relations were continuously de­ teriorating, ‘Hinduism’ was finally acknowledged as ‘one of the religions adhered to by the Indonesian people’ between 1958 an 1962. Three factors facilitated the official recognition: (1) the growing irritation on the part of Sukarno with the separatist and Is­ lamist Darul Islam movement; (2) the fact that many members of the circle around Sukarno were influenced by theosophy; and (3) the coincidence that Soekarno’s mother was Balinese. Strangely, the newly established Parisadha Hindu Dharma, sole repre­ sentative organ of the Indonesian Hindu community modelled after the Indian parisad, did not include Pandit Shastri, who was to be further mar­ ginalized as time went on. He contin­ ued to exert some influence, though, through a book on Hindu Dharma for which he also received an award of the Birla Foundation in India. During Soeharto’s ‘new order’ regime, relations with India normal­ ized, even though India had lobbied in vain to have South Asia included

1993, several travel agencies in Bali have organized annual pilgrimages to India. Having lost its main trade partner, the Soviet Union, in 1989 India has been increasingly orienting itself to­ wards the Asia-Pacific market, as Christophe Jaffrelot has recently pointed out in a paper. Since 1995, the Indian Council for Cultural Relations (ICCR) has annually provided ten scholarships for Indonesians to study Indian culture at an Indian universi­ ty. These scholarships were exclusive­ ly given to Indonesian Hindus who have studied Indian philosophy, Hindi, and Sanskrit in Dehli, Agra, or other Indian cities. The ICCR has fur­ thermore donated complete sets of Vedantic literature to two Balinese temples. Besides, Indian expatriates working in Indonesia like, for in­ stance, the general manager of the Ba­ linese Oberoy Hotel, have been spon­ soring the building of Hindu temples and the publication of Hindu litera­ ture in Indonesia as well as providing grants for underprivileged members

W ayan Nilon Batan performing Agnihotra. within ASEAN. However, since Soeharto discouraged identification with a transnational religious community that would hamper the development of a strong national identity, contacts between Indonesian and Indian Hin­ dus remained relatively limited until the 1980s. By then, the rapid modern­ ization o f Indonesian society and the increasing intellectualization of the officially prescribed Indonesian reli­ gions had gradually undermined tra­ ditional spirituality on one hand, and raised the need for a new kind of spir­ ituality on the other hand, especially among the urbanized modern middle class. Among the Indonesian Hindu community, more and more people started to get interested in new Indi­ an spiritual movements like the Hare Krishna movement, the Satya Sai Baba movement, Ananda Marga, Brahma Kumaris, Shri Shri Ravi Shankar, and Osho (Bhagwan Shree Rajneesh). Be­ sides, the ‘New Age’ culture was be­ ginning to make an inroad into the Javanese and Chinese community. When Soeharto started to court the Muslim community at the end of the 1980s in order to increase mass sup­ port for his regime, the rapid Islamization of public discourse lead to serious disadvantages of the minority religions in Indonesia. In response to the official promotion of a modern Muslim Indonesian identity, Hindus were beginning to develop a stronger sense of being part of a transnational religious community, looking to India for inspiration how to be a mod­ ern Hindu in a modern world. Since

of the Hindu community outside Bali to study Hinduism at one of Indone­ sia’s Hindu colleges. In October 2000 the Indian Ambas­ sador to Indonesia, the Balinese Gov­ ernor and other Balinese and Indians living in Indonesiajointly established the Foundation for Balinese-Indian Brotherhood (Yayasan Persaudaraan Bali-India) in Denpasar and a Hindu Study Centre at the Umversitas Udayana. In November 2000 a delega­ tion of Balinese Brahmin priests will visit India on the invitation of the In­ dian government. A meeting with the Shankaracarya of Kanchipuram has also been arranged for this occasion. It is planned that the Shankaracarya will then repay the visit of the Bali­ nese priests at the beginning of next year. This will then be the first time that a Shankaracarya has left the sa­ cred soil of India. ■

Dr M artin R am stedt is an ESF I Alliance fellow and is stationed at the HAS in Leiden. E-mail: mramstedt@rullet.leidenuniv.nl

Indian Thought in the Dutch Indies The

To what extent did the Theosophical Society (TS) disseminate Indian thought to the Dutch Indies (1880-1942)? Before we embark on this topic, we need to clarify three points first: (1) what is theosophy, and what is the Theosophical Society; (2) what influence did the TS have in the Dutch Indies; and (3) how much did theosophy actually represent Indian thought? By HERMAN DE TOLLENAERE

hat is theoso­ phy? In a wider sense, people call various attem pts within different religions to get knowledge of God, or of ‘higher worlds’, ‘theosophy’. With regard to Indonesian Islam, this m ight also include the Sufi tradition. Here, however, we discuss ‘theosophy’ in a narrow sense, i.e. the ideas pro­ moted by the Theosophical Society as well as ideas outside the direct frame­ work of the TS, but clearly influenced by it, whether it is acknowledged or not. Within the circles of the TS, theosophy is synonymous with ‘Di­ vine Wisdom’. The TS was founded in 1875 in New York by sixteen people, including the initiator, the Russian Madame Hele­ na Petrovna Blavatsky, and the presi­ dent, the American Col. Henry Olcott. Its immediate aim was to promote the study of how to evoke nature spirits by the supposedly magical properties of the ancient Egyptian hieroglyphs. In 1879, Blavatsky and Olcott estab­ lished themselves and their society in India. Since 1883, the headquarters of the TS are in Adyar near Madras. In 1907, the English Annie Besant suc­ ceeded Olcott as president, and in t934, Besant herself was succeeded by her compatriot George Arundale.

TS influence in the Duthc Indies Between 1880 and 1883 the German Baron von Tengnagell founded the first TS lodge in Java. It soon fell apart, though. Twenty years later, the TS be­ came more successful in the Dutch Indies, also influencing the social and political life outside their immediate membership. The monthly ‘Theo­ sofisch Maandblad voor NederlandschIndië’ was published (in the Dutch language) from July 1901 onwards. In 1903, already five lodges existed in Java. All their officials were Dutch, ex­ cept for one Javanese aristocrat. In 1930, membership had risen to its highest level ever: 2090 people, 1006 of whom were ‘European’. These Euro­ peans were mainly Dutch who made up nearly a half per cent of all the Dutch in the Dutch Indies, the high­ est proportion o f theosophists any­ where in the world! Eight hundred and sevety-six members were ‘Native’ (Indonesian), and 208 members were ‘Foreign Oriental’ as most Asians of non-Indonesian ancestry were catego­ rized. Probably about 190 of them were Chinese and approximately twenty of them were Indian. One

should not try to credit the few Indian members of the TS living in the Dutch Indies with any significant in­ fluence in the local TS lodges, let alone in the politics of the Dutch Indies. Ge­ ographically, membership was con­ centrated on Java. Socially, most In­ donesian members were Javanese aristocrats, so-called pnyayi, and only a few of the ‘natives’ were West Suma­ tran and Balinese noblemen. One influential theosophist was a member of the Volksraad [i.e. the largely powerless colonial ‘parlia­ ment’] and a political theorist, Raden Mas Soetatmo Soeriokoesoemo (18881924). He was also a member of the Paku Alam princely dynasty of Yogyakarta. Rejecting all-Indonesian nationalism, Marxism, Islam, and Western democracy alike, Soetatmo advocated instead an aristocratic, spiritual, ‘Javanese’ nationalism. His ideas on spirituality, however, were rooted in a European theosophist in­ terpretation of Indian religion, espe­ cially the Indian caste system. Like theosophists in other countries de­ fending social hierarchies perceived as under threat, he equated all-Indone­ sian nationalism, Marxism and West­ ern democracy with the sudra whom he saw as incapable of acquiring the wise esoteric insight of their social su­ periors. Soetatmo’s name and some of his ideas resurfaced in General Soe­ harto’s post-1965 ‘New Order’ regime, even though Soetatmo’s narrow ‘Ja­ vanese’ brand of nationalism had by then ceased to be a viable ideological option.

How much did theosophy actually represent Indian thought? In Indonesia, ju st like in other countries, early twentieth century views on India were much more influ­ enced by theosophy than one might expect. Though the geographical and ideological links of theosophy with India are evident, it did not originate in India nor were its leaders of the pre-1942 period Indian. In order to as­ sess how theosophy disseminated In­ dian thought to the Dutch Indies, we will have to look at how theosophists represented and mediated influences from Indian literature, politics, and religion. Quite a few Indian intellectuals and artists in British India were influenced by theosophy. One of them was the fa­ mous poet Rabindranath Tagore, who visited Java and Bali, where he was well received by both Javanese and Hindu-Balinese intellectuals, in 1927. The content of political discussions in India as far as it consisted of topics

discussed also among the members of the Indian lodges, i.e. especially the is­ sues connected with the fight for in­ dependence controversely debated by Gandhi and Annie Besant, often raised the interest of the theosophists in the Dutch Indies, too. The (mainly Dutch) theosophists commenting on these issues in writing, sided with Mrs Besant who reasoned against a complete break with the British Em­ pire, whereas Gandhi or even more anti-colonialist Indian opponents took a much more radical stance. The (Dutch) theosophists like Govern­ ment Secretary A. Vreede backed up their position by claiming that the Dutch Indies were not as advanced as India. Like Mrs Besant, they based their political ideas on theosophical doctrines. In Annie Besant’s religious writings, for instance, India had a central significance for the ‘Aryan race’, of which the highest achieve­ ment so far was the British Empire. In the Dutch Indies, former Assistent Resident and theosophist C.A.H. von Wolzogen Kiihr spoke about the mythical ancient Indian colonizers bringing Indian civilization to the In­ donesian islands as ‘Aryan’ predeces­ sors and precedents of present ‘Aryan Dutch. To the Javanese priyayi, theosophists described India as the historical origin of their relative priv­ ileges as they supposedly descended from the earlier Aryan invasion of the archipelago. The majority religion in Indonesia in the Dutch Indies was - as it is now Islam. Historically, Muslim traders from Gujerat had been instrumental in spreading their faith in the archi­ pelago. No Indian Muslim influence, however, was mediated by the TS since there were practically no Mus­ lim members in India. Indian Hindu views of theosophy differed widely, ranging from praise to criticism. One prominent Hindu critic, Swami Vivekananda, called theosophy ‘this Indian grafting of American Spiritu­ alism - with only a few Sanskrit words taking the place of spiritualistic jar­ gon’. He saw a general tendency out­ side India - which held true also for the Dutch Indies - to form an image of India, and Hinduism, for that mat­ ter, through the mediation of theoso­ phy, and claimed: ‘Hindus... do not stand in need of dead ghosts of Rus­ sians and Americans!’ In 1911, Indian representatives of Hinduism, Buddhism, Zoroastrian­ ism, and Islam wrote to the newspa­ per ‘The Hindu’ that while, in theory, adherents of any religion could join the TS and continue to practise their faiths, in fact they were obliged to adopt a collection of doctrines and ideas inconsistent with any of them. The theosophist C.W. Leadbeater on his part said: ‘you m ust not take it for granted when you meet with any of