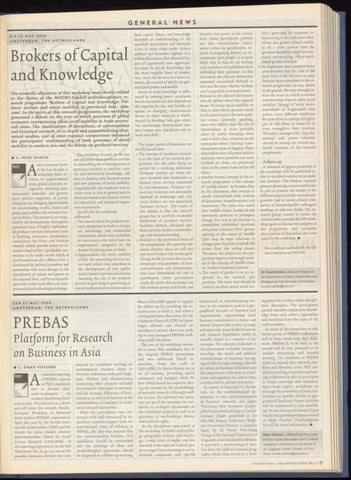 sia’s economic boom of the last decades is . reshaping Asian so­ cieties. In unprecedented ways, global economic in­ tegration, widening com­ munication networks, and govern­ ment policies supportive of private enterprise are changing opportunities for accumulating wealth, status, and power, and redefine the avenues of so­ cial mobility. This process is accompa­ nied by the development, throughout provincial Asia, of highly sophisticat­ ed producer services enterprises (such as banking, insurance, accountancy, consultancy, law firms, and business schools) which provide access to re­ sources required for a profitable con­ nection to the wider world. Much of the discussion on this ‘affluent Asia’ is dominated by political scientists and economists who trace changes in the distribution of capital and power on the national level, and by anthropolo­ gists who study local effects of entre­ preneurial and technological change.

The workshop focused on the key role played by these producer services in channelling the widening access of provincial societies to markets, capi­ tal, and commercial knowledge, and thus in shaping new business arenas and new patterns of social mobility. Geographically, the emphasis was on urban areas in Asia in general and on Asian provincial cities that are centres of commercial and industrial expan­ sion in particular. Specifically the workshop addressed: 1. The central role of the producer ser­ vices enterprises as brokers of capi­ tal, knowledge, and commercial connections, which may contribute in vital ways to the rise of new en­ trepreneurial categories or the demise of existing ones, or both; 2. Opportunities for social mobility within the expanding services sec­ tor itself, which may contribute to the development of new profes­ sional classes in provincial societies. Assessing the role of the producer services as gate-keepers governing ac­ cess to fundamental resources such as

t this first meeting of PREBAS, a group of PhD candidates met to discuss their work-in-progress on matters concerning busi­ ness in Asia. The initiative is a direct spin-off from the seventh NordicEuropean Workshop in Advanced Asian Studies (NEWAS), organized in April this year by the Nordic Insti­ tute for Asian Studies (NIAS) and the Centre for Asian Studies Amsterdam/Amsterdam School for Social Science Research (CASA/ASSR). At this meeting (reported on in the HAS Newsletter No. 22, p. 41), one of the possible thematic clusters was con­

stituted by candidates working on contemporary business issues in Vietnam, Indonesia, India and Singa­ pore. Themes and characteristics connecting their projects included the attention they paid to networks and the strategic behaviour of busi­ nessmen, as well as an interest in the embeddedness of business in wider social and political arenas. While the participants were very content with and stimulated by the qualified academic support from the international team of scholars at NEWAS, the idea was mooted that the communication between PhD candidates should be maintained and the exchange of ideas and methodological approaches should be deepened in a follow-up meeting.

land, capital, labour, and knowledge demands an understanding of the manifold institutions and networks active in Asian cities under various political and economic regimes. It is within this context that the social im­ pact of (apparently) new opportuni­ ties must be placed. Knowledge, like the more tangible bases of produc­ tion, must also be seen as a scarce re­ source, the control of which can gen­ erate both power and wealth. Access to such knowledge is influ­ enced by existing power structures, but its successful use also depends on the capacity for fast and flexible re­ sponse to changing circumstances. Access to these resources is funda­ mental in deciding ‘who gets what’, but increasingly international mar­ kets impose new disciplines and re­ ward new skills. The major points of discussion are briefly listed below: 1. The concept o f ‘producer services’ is at the basis of the research pro­ gramme. For the time being we settled for a working definition: ‘Producer services are those ser­ vices invested into businesses as distinct from services consumed by end-consumers’. Producer ser­ vices are, however, not necessarily involved in brokerage and, vice versa, brokers are not necessarily ‘business services’. The result of this debate is that the research group has to carefully reconsider definitions of producer services, business services, advanced pro­ ducer services, brokers and broker­ age, and entrepreneurship. 2. Related to the provincial focus of the programme, the question was raised whether there are still any provincial brokers left in this glob­ alizing world. It seems that in con­ temporary Asia processes of insti­ tutionalization and democratiza­ tion have diminished the role of gatekeepers. Some participants made the point that provinces are left without power and funds, and

When CASA/ASSR agreed to support the follow-up by providing the in­ frastructure to hold it, and when a travel grant from the Centre for De­ velopment Research (CDR) in Copen­ hagen allowed two Danish re­ searchers to attend, there was noth­ ing to stop inaugural PREBAS work­ shop could take place. The core of the workshop consist­ ed of seven PhD candidates, five of the original NEWAS participants and two additional Dutch re­ searchers. From the staff of CASA/ASSR, Dr Mario Rutten sat in on all sessions, providing useful comments and insights, while Dr Bert Schijf shared his expertise dur­ ing the session on the methodology of network research. Although mod­ est in size, the informal but inten­ sive set-up of the meeting was con­ ducive to in-depth discussions on the individual projects as well as to questions of methodology, theory, and research angles. As the disciplines represented at the workshop included anthropolo­ gy, geography, history, and sociolo­ gy, a wide array of angles and foci was only to be expected. Indeed, pro­ jects ranged from zooming in on in­ dividual companies and specific

therefore lose power to the central level. Other participants pointed out that centralization creates power niches for gatekieepers. In­ stead of imagining brokers as au­ tonomous, new people, it is more likely that in Asia we are dealing with members of established elites defending their positions. In this discussion the old/new dichotomy remained unresolved. Related to this was the issue whether brokers can be regarded as entrepreneurs. 3. Related to the old/new dichotomy was the debate about the regional focus. To study social mobility in Asia, a more fertile ground would be the provincial or the metropoli­ tan arena. Generally speaking, those who believe that the role of intermediary is most probably taken by newly emerging elites tend to shift their attention to the metropoles where ‘exciting’ trans­ formations seem to happen. Those who believe that old power holders maintain their positions are more inclined to focus on provincial cities as the power bases of the old elites. 4. Another central concept in the re­ search programme is the concept o f‘middle classes’. As became clear in the discussion, this concept is closely intertwined with notions of dynamism, transformation, and innovation. The issue was raised that ‘middle classes’ in Asia do not necessarily generate or propagate change, but may as yet attempt to consolidate established positions and power relations. ‘New’ groups aspiring to the status of ‘middle class’ may be more reluctant to change once they have reached this status than the ruling classes. Therefore, the projects in the pro­ gramme require a thorough analy­ sis of the concept o f‘middle class­ es’ in their situational context. 5. The aspect of gender is as yet ne­ glected in the research pro­ gramme. The issue that should be raised is to what extent social mo­

commercial or manufacturing sec­ tors, to the attention paid to a geo­ graphical location of business and organizations representing local business communities at home and abroad. Despite this variety in range and approach, many fields ofinterest and research hypotheses could be causally linked to a number of key concepts. The concepts indicated in the discussions included: entrepre­ neurship, the social and political embeddedness of business, manag­ ing of risk through strategy, the role of culture in business behaviour and the importance of the state as a facil­ itator and regulator for, and at times a competitor to, private enterprise. As a point of departure for the ses­ sion on the methodological ap­ proaches to and operationalization of business research, one paper, ‘Practising New Economic Geogra­ phies? Some Methodological Consid­ erations’ (Paper presented at the RSG-IBG Annual Conference, Brigh­ ton, Universtiy of Sussex, 4-7 January 2000), by Dr Henry Wai-chung Yeung of the National University of Singapore, was circulated in advance. It provided a methodological base­ line from the field of economic geog­ raphy which then served as a start­

bility generated by economic re­ structuring is not only class relat­ ed but also gender-related mobili­ ty. At a more general level the question should be raised how eco­ nomic restructuring affects estab­ lished gender relations. 6. An important issue raised in many contributions was the role of the state. First of all, the state as actor deserves more attention in the re­ search programme. As was shown in the papers, the state strongly af­ fects the ways in which economic restructuring impacts upon social mobility. ‘Strong’ or ‘weak’ states, centralized or fragmented state power, create different conditions for new elites to emerge and pros­ per or old elites to maintain or even strengthen their position. Therefore, concepts like ‘state for­ mation’ and ‘power relations’ should be among the central ana­ lytical concepts of the research programme.

F o llo w -u p A selection of papers presented at the workshop will be published ei­ ther in an edited volume or in acade­ mic journals. The brokers research group is planning a major conference in 2003 to present the results of the different projects of the research pro­ gramme and to invite critical com­ ments of knowledgeable colleagues working in adjacent fields. The re­ search group intend to invite the scholars who attended the ESF work­ shop again to discuss the progress of the programme and reconsider major points of discussion that were raised in the workshop. ■ The workshop was funded by the ESF Asia Committee and WOTRO.

ing point for a wider, multi-discipli­ nary discussion. The participants gained valuable comparative knowl­ edge from each other’s approaches and benefited from the input of the staff members. As many of the researchers in this initial group of PREBAS enthusiasts will be busy conducting their field­ work, PREBAS II, to be held in the second half of 2001, promises to be another interesting and fruitful meeting. The initiators of PREBAS aspire to expand this research plat­ form and therefore invite PhD can­ didates working on projects pertain­ ing to business in Asia to participate in future meetings and initiatives. Apart from regular workshops, we envisage the possibility ofjoint pub­ lications on specific themes or geo­ graphical locations. Future activities will be announced in this newslet­ ter. Do not hesitate to contact Pepijn van de Port (pvandeport@pscw.uva.nl) or Sikko Visscher (visscher@pscw. uva.nl) for more information. ■ Sikko Visscher is affiliated with the Centre for Asian Studies Amsterdam and is currently completing a dissertation on the history of the Singapore Chinese Chamber of Com­ merce. E-mail: visscher@pscw.uva.nl