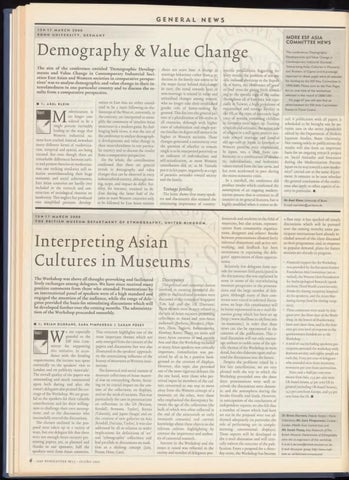 Demography &amp; Value Change The aim o f the conference entitled ‘Demographic Develop­ ments and Value Change in Contemporary Industrial Soci­ eties: East Asian and Western societies in comparative perspec­ tives’ was to analyse demographic and value change in their in­ terrelatedness in one particular country and to discuss the re­ sults from a comparative perspective. I ments in East Asia are either consid­

y r odemization is no longer conJL V JL sidered to be a single process inevitably leading to the stage that Western industrial na­ tions have reached. Instead, nowadays many different forms of moderniza­ tion, temporal and spatial, are being stressed. But even though there are remarkable differences between earli­ er and present theories on moderniza­ tion one striking similarity still re­ mains: notwithstanding their huge economic and social achievements, East Asian countries are hardly ever included in the research and con­ struction o f sociological theories on modernity. This neglect has produced two simplified pictures: develop-

ered to be a mere following-in-thefootsteps of the West or, conversely, to the contrary, are interpreted to exem­ plify the continuity of timeless Asian structures in a modern guise. By chal­ lenging both views, it was the aim of the conference to analyse demograph­ ic developments and value change in their interrelatedness in one particu­ lar country and to discuss the results from a comparative perspective. On the whole, the contributions confirmed that there are general trends in demography and value changes that can he observed in every industrialized country, although tim ­ ing, scope, and impact do differ. Fer­ tility, for instance, resumed its de­ cline during the latter half of the 1960s in most Western countries only to be followed by East Asian nations

about ten years later. A change in marriage behaviour rather than a re­ duction in the family size seems to be the major factor behind this change. In turn, the trend towards later or non-marriage is related to value and attitudinal changes among women, who no longer take their established gender role of home-making for granted. This fits into the general pic­ ture of a pluralization of life-styles in all countries, although with higher rates o f cohabitation and single-par­ ent families its degree still seems to be higher in Western societies. These changes generated a controversy over the question of whether to remain single is to be interpreted positively as an indicator o f individualism and self-actualization, as most Western contributors did, or, as M. Yamada put it in his paper, negatively as a sign of parasitic attitudes toward society and the family.

Interpreting Asian Cultures in Museums The Workshop was above all thought-provoking and facilitated lively exchanges among delegates. We have since received many positive comments from those who attended. Presentations by an international panel o f speakers were o f a high standard and engaged the attention o f the audience, while the range o f dele­ gates provided the basis for stimulating discussions which will be developed further over the coming months. The administra­ tion o f the Workshop proceeded smoothly.

e are especial! grateful to th M\ T y ESF Asia Com &gt; I mittee for supporting I this initiative. In accor dance with the funding requirements, the income was spen essentially on the speakers’ visit tc London and on publicity materials1 The overall quality of the papers wa: outstanding and much commentec upon both during and after th( event2; delegates also praised the cov­ erage o f the Workshop. We are grate­ ful to the speakers for their valuable contributions and for their willing­ ness to challenge their own assump­ tions, and to the discussants whc successfully steered the discussions. The themes outlined in the pro­ posal were taken up in a variety ol ways, but one delegate felt that there were not enough Asian curators pre­ senting papers; yet, as planned and thanks to our sponsors, h alf the speakers were from Asian countries.

This criticism highlights one o f the most im portant themes which not only emerged from the content o f the papers and discussions but was also illustrated in the speakers’ approach­ es: the constraining influence of the history o f museums as Western insti­ tutions. The historical and social context of museum collections of Asian m ateri­ al was an overarching theme, focus­ ing on its crucial impact on the con­ tent o f the collections, on displays, and on the work o f curators. This was particularly the case in presentations on collections in the US (Watson, Kendall, Bronson, Taylor], Russia (Taksami), and Japan (InagaJ and on the creation o f new galleries on Asia (Kendall, Durrans, Taylor], It was also addressed by all in relation to wider implications for definitions o f ‘art’ and ‘ethnographic’ collections and had parallels in discussions on tradi­ tion as a shifting concept (Jain, Pruess, Hout, Cate],

The political and curatorial choices involved in creating successful dis­ plays in m ulticultural contexts were discussed in the context of Singapore (Tan, Lee] and the UK (Durrans]. These themes were in turn related to the role of Asian curators presenting collections to Asian and non-Asian audiences (Barbosa, Bronson, Hemmet, Zhou, Tagieva, Babanazarova, Alimbay, Roon], There are more and more Asian curators in and outside Asia and that the Workshop included so many Asian speakers was critically important. Consultation was per­ ceived by all to be a positive back­ ground to the creation of displays. However, this topic also provoked one of the most vigorous debates. On the one hand, were those who per­ ceived input by members o f the cul­ ture concerned as one way to move away from the Western concept of a museum; on the other, were those who emphasized the discrepancy be­ tween the age o f the collections (the bulk o f which was often collected at the end of the nineteenth or early twentieth centuries] and current knowledge about these objects in the relevant culture, highlighting by contrast the importance and author­ ity of curatorial research. Interest in the Workshop and the issues it raised was reflected in the variety and number o f delegates: pro­

specific peculiarities. Regarding fer­ tility trends, the problem of sex-specific induced abortions in the Repub­ lic of Korea, the observance of ‘good’ or ‘bad’ years for giving birth accord­ ing to the specific sign o f the zodiac throughout all of East Asia, but espe­ cially in Taiwan, a high prevalence of extramarital and teenage fertility in the US, or the topic o f extremely high rates of women remaining childless in Germany were taken up. Turning to values and attitudes, the minor role of religion or a still quite positive atti­ tude toward marriage and familial old-age-care in Japan in contrast to Western patterns were emphasized. In Japan, too, a shift from conformistic to a combination of idealis­ tic, individualistic, and hedonistic values started from the late 15170s, and has even accelerated in pace during the recent economic crisis. In a nutshell, the conference did produce results which confirmed the assumption of an ongoing modern­ ization process that is common to all counties in its general features, but is highly modified when it comes to de-

fessionals and students in the field of museums, but also artists, represen­ tatives from community organiza­ tions, designers and othersL Breaks between presentations allowed lively informal discussions and active net­ working, and feedback has been unanimous in expressing the dele­ gates’ appreciation of these opportu­ nities. Relatively few delegates from out­ side the museum field participated in [ the discussions; this was explained by some in terms of the overwhelming museum perspective in the presenta­ tions and the large number o f dele­ gates. Although many of their com­ ments were voiced in informal discus­ sions, we hope this constituency will be better represented in an e-mail dis­ cussion group which has been set up (http://www.mailbase.ac.uk/lists/asia -in-museums/], in order that these views can also be represented in the contents of the publication. This email discussion will not only encourj age authors to tackle some of the spe­ cific themes of the Workshop in more I detail, but also elaborate upon and ex­ tend the discussions into the future. Despite the problems raised by a few late cancellations, we are very pleased with the way in which the Workshop proceeded over the three days: presentations were well re­ ceived; the discussions were dynam­ ic; and the atmosphere during the breaks friendly and lively. However, in anticipation of the conclusions of independent reports, we also felt that a num ber o f issues which had been set out in the proposal were not ad­ dressed adequately (in particular the role of performing art in comple­ menting conventional displays]. These aspects will be developed in the e-mail discussion and will criti­ cally inform the outcome of the pub­ lication. From a proposal for a threeday event, the Workshop has become

MORE ESF ASIA COMMITTEE NEWS The conferences ‘Demographic Developments and Value Change in Contemporary Industrial Societies&#39;, &#39;Interpreting Asian Cultures in Museums&#39;, and &#39;Brokers of Capital and Knowledge’ reported on these pages were all selected for funding by the ESF Asia Committee in 1999/2000. Please turn to the Pink Pages for an overview of the workshops selected in the round of 2000/2001. On page 47 you will also find an advertisement for ESF Asia Committee Research Travel Grants.

tail. A publication with all papers is scheduled to be brought out by au­ tum n 2000 in the series JapanArchiv edited by the Department of Modern Japanese Studies, Bonn University. Not resting solely in publications the results will also form an important basis for an ongoing research project on ‘Social Attitudes and Structures during the Modernization Process: Japan on its way toward a new moder­ nity?’ carried out at the same depart­ ment. It remains to be seen whether the general conclusions of the confer­ ence also apply to other aspects of so­ ciety in particular. ■ Dr Axel Klein, University o f Bonn. E-mail: axel.klein@uni-bonn.de

a first step: it has sparked off timely discussions which will be pursued over the coming months; some par­ ticipant institutions have already in­ cluded several o f the ideas discussed in their programme; and, in response to popular demand, plans for future sessions are already in progress. 1 Financial support for the Workshop was provided by the European Science Foundation Asia Committee (see at­ tached), the Wenner Gren Foundation for Anthropological Research (speak­ ers from Third World countries only; drinks for closing reception; hospital­ ity for speakers), and the Asian Mar­ keting Group (food for closing recep­ tion). 2 These comments were made by dele­ gates over the three days of the Work­ shop, in the letters of thanks many have sent since then, and in the four­ teen per cent level of response to the questionnaire handed out at the Workshop. 3 A total of 124 (including speakers) par­ ticipants attended the workshop with between seventy and eighty people on each day. Forty per cent of delegates who attended were from museums, seventeen per cent from universities. Nine-and-a-half per cent were Asians from Asia, 23,5 per cent were UK-based Asians, 47 per cent UK in general (excluding UK-based Asians), 14,5 per cent from Europe, and 5,5 per cent from the US. ■