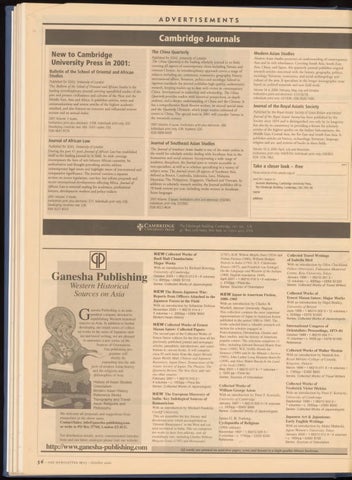 Modem Asian Studies promotes an understanding of contemporary Asia and its rich inheritance. Covering South Asia, South-East Asia, China, and Japan, this quarterly journal publishes original research articles concerned with the history, geography, politics, sociology, literature, economics, and social anthropology and culture of the area. It specialises in the longer monographic essay based on archival materials and new field work.

The China Quarterly is the leading scholarly journal in its field, covering all aspects of contemporary china including Taiwan and overseas Chinese. Its interdisciplinary approach covers a range of subjects including art, commerce, economics, geography, history, international affairs, literature, politics and sociology. Edited to rigorous standards the journal publishes high-quality, authoritative research, keeping readers up to date with events in contemporary China. International in readership and scholarship, The China Quarterly provides readers with historical perspectives, in-depth analyses, and a deeper understanding of China and the Chinese. It has a comprehensive Book Review section, an annual special issue and the Quarterly Chronicle, which keeps readers informed of . events in China. The special issue in 2001 will consider Taiwan in the twentieth century.

Bulletin of the School of Oriental and African Studies Published for SOAS, University o f London

I he Bulletin o f the School o f Oriental and African Studies is the leading interdisiplinary journal carrying uparalleled studies of the past and present civilizations and cultures of the Near and the Middle East, Asia and Africa. It publishes articles, notes and communications and review articles of the highest academic standard, and also features an extensive and influential reviews section and an annual index. 2001 Volume: 3 issues. Institutions print plus electronic: £100. Individuals print only: £45 Developing countries rate: £60. SOAS copies: £50. ISSN 0041-977X

Journal o f the Royal Asiatic Society has been published by the Society since 1834 and is distinguished not only by its longevity but also by its consistency in providing a forum for scholarly articles of the highest quality on the Indian Subcontinent, the Middle East, Central Asia, the Far East and South-East Asia. It publishes articles on history, archaeology, literature, language, religion and art, and reviews of books in these fields.

The Journal o f Southeast Asian Studies is one of the main outlets in the world for scholarly articles dealing with Southeast Asia in the humanities and social sciences. Incorporating a wide range of academic disciplines, the Journal aims to remain accessible to non-specialists, as well as to scholars specializing in a variety of subject areas. The Journal covers all aspects of Southeast Asia, defined as Brunei, Cambodia, Indonesia, Laos, Malaysia, Myanmar, The Philippines, Singapore, Thailand and Vietnam. In addition to scholarly research articles, the Journal publishes 60 to 70 book reviews per year, including works written in Southeast Asian languages.

NEW The Russo-Japanese War: Reports from Officers Attached to the Japanese Forces in the Field With an introduction by Sebastian Dobson

anesha Publishing is an inde&#39;■■pendent company devoted to republishing Western historical sources on Asia. In addition to further developing our initial series of collect­ ed works in the areas of Japanese stud­ ies and travel writing, we are pleased to announce a new series on the Sources of Orientalism. Our publishing pro­ gramme will shortly be expanding into the sub­ jects of modem Asian history and the religions and philosophies of Asia. I

History of Asian Studies Orientalism !’4- ■i- VjJ Modern Asian History Reference Works Topography and Travel Asian Religions and Philosophy We welcome all proposals and suggestions from researchers in the above areas. Contact/Sales: info@ganesha-publishing.com or write to PO Box 27760, London E5 8UU. For distribution details, newly commissioned introduc­ tions and our latest catalogue please visit our website.

NEW The European Discovery of India: Key Indological Sources of Romanticism With an introduction by Michael Franklin, Cardiff University This set assembles the key literary and devotional texts which accomplished an ‘Oriental Renaissance’ in the West and cul­ tural revolution in India. This set comprises ten works in their first editions, now all exceedingly rare, including Charles Wilkins Bhagvat Geeta (1785) and Heetopades

NEW Japan in American Fiction, 1880-1905 With an introduction by Charles B. Wordell, Nanzan University, Nagoya This collection contains the most important representations of Japan in American fiction published in the period 1880 to 1905. The works selected form a valuable research col­ lection for scholars engaged in Postcolonialism, Orientalism, Gender and Race studies, and the history of American popular culture. The selection comprises 11 titles, including Edward Howard House Yone Santo (1888), W.E. Griffis Honda the Samurai (1890) and In the Mikado’s Service (1901), John Luther Long Madame Butterfly (1898), and Alice Mabel Bacon In the Land o f the Gods (1905). May 2001 • 1 86210 017 9 • 7 volumes • c. 3250 pp • Price tbc Series: Sources o f Orientalism

All works are printed on acid-free paper, sewn and bound in a high-quality library buckram.