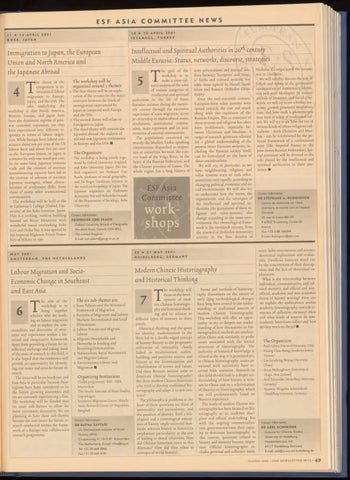 Immigration tojapan, the European Union and North America and

the Japanese Abroad The workshop will be he theme of the organized around 3 themes: m symposium is international labour x. The first theme will be an explo­ ration of the reasons for the major migration to Europe, contrasts between the levels of Japan, and the USA. The immigration experienced by idea underlying the Japan as compared with Europe workshop is that North America, and the USA. Western Europe, and Japan have been the dominant regions of post­ 2. The second theme will relate to Foreigners in Japan. war economic expansion, yet they have experienced very different re­ 3. The third theme will concern the Japanese abroad: the analysis of sponses in terms of labour migra­ old and new Japanese settlements tion. While foreign-born labour con­ in Europe and the USA. ■ stitutes about ten per cent of the US labour force and about five per cent The Organizers: in the European Union, in Japan it The workshop is being jointly orga­ accounts for only one-tenth per cent. nized by Oxford University, England, At the same time, Japanese overseas and Kobe University, Japan. The Ox­ trade and the creation of overseas ford organizers are Professor Ceri manufacturing capacity have led to Peach, professor of social geography, the creation of colonies of overseas and Dr Roger Goodman, lecturer in Japanese managers, whose charac­ the social anthropology of Japan. The teristics of settlement differ from Japanese organizers are Professors those of many other transnational Kiyomitsu Kui and Nobuhiko Iwasaki communities. of the Department of Sociology, Kobe The workshop will be held at the University. St Catherine’s College (Oxford Universityj of the Kobe Institute, Japan. This is a striking, modern building Contact Information: PROFESSOR CERI PEACH located on Rocco Mountain with Oxford University, School of Geography wonderful vistas overlooking Kobe Mansfield Road, Oxford, 0X4 4DU, City and Osaka Bay. It was opened by The United Kingdom his Imperial Highness Prince TomoE-mail: ceri.peach@geog.ox.ac.uk hito ofMikasa in 1991. f | I

Labour Migration and SocioEconomic Change in Southeast and East Asia

he aim of the —, workshop is to J _ bring together scholars who are work­ ing on labour migration and to explore the com­ monalities and diversities of struc­ tures and experiences within a his­ torical and comparative framework. Apart from providing a forum for in­ tellectual exchange and taking stock of the state of research in this field, it is also hoped that the conference will provide an opportunity for identify­ ing core issues and areas for future re­ search. The focus will be on Southeast and East Asia in particular because these regions have been considered to be the fastest growing economies and yet are currently experiencing a flux. The workshop will be divided into six main sub-themes to allow for more systematic discussion. We are planning to have these sub-themes become the core issues for future re­ search conducted within the frame­ work of a Europe-Asia collaborative research programme.

Intellectual and Spiritual Authorities in zo th century Middle Eurasia: Status, networks, discourse, strategies he goal of the ^ I workshop is to ^ J_ make a cross-cul* * tural analysis of the roles of various categories of intellectual and spiritual authorities in the life of Inner Eurasian societies during the twenti­ eth century through the successive experiences of mass migration, access to citizenship in multicultural states, revolutions, institutional commu­ nism, mass repression and (re-)construction of national communities. The populations concerned are mainly the Muslim Turkic-speaking communities dispatched as majori­ ties or minorities between the east­ ern bank of the Volga River, in the heart of the Russian Federation, and the Chinese province of Gansu. The whole region has a long history of

The six sub-themes are:

Nicholas II’s reign, until the current war in Chechnia. We will notably discuss the role of beliefs and values in the permanent construction of community identi­ ties and state ideologies. In various periods o f economic and social tran­ sition, we will try to see whether eco­ nomic growth promotes seculariza­ tion, and how such a phenomenon may lead to a loss of traditional val­ ues. We will try to see how the rise of various kinds of ethno-religious rad­ icalisms - both Christian and Mus­ lim - can be conditioned by the po­ litical framework of a confessional state (like Imperial Russia or the post-Soviet Russian Federation). Spe­ cial attention will be devoted to the role played by the intellectual and spiritual authorities in these pro­ cesses. I

and Historical Thinking Forms and methods of historiog­ 1 ^ he workshop will raphy discussions on the nature of I focus on the devot­ early Qing methodological changes ie JL opment of modhave long been central to our under­ ■* ern Chinese historiogra­ standing of traditional sources of phy and historical think­ modern Chinese historiography. ing and its relation to This workshop will offer an oppor­ different types of memory in three tunity to try to deepen our under­ panels. standing of how discussions on his­ Historical thinking and the quest toriographical methods are conduct­ for identity, modernization in the ed in China and, similarly, to probe West led to a double-edged concept issues associated with the formal of history: history as the progressive realization of rationality, closely structures of historiography. The authority of historical knowledge is linked to secularization, nation­ related to the way it is presented yet, building, and positivist science, and in Chinese historiography, issues as­ history as the historicization and sociated with narrativity have re­ relativization of norms and values. ceived little attention. Research in Did these Western notions come to this field should lead to a deeper un­ dominate Chinese historiography? derstanding of how history is writ­ Are there modern Chinese historians ten in China and to a relativization who tried to develop traditional his­ of theories on historiography, which toriography and adapt it to new con­ are still predominantly based on texts? Western experience. The philosophical problems at the The study of modern Chinese his­ heart of these questions are those of toriography has been focused on his­ universality and particularity, and toriography as an academic disci­ the question of identity. Both a tele­ pline and official undertaking. But ological and a cosmological concep­ with the ongoing commercializa­ tion of history imply universal stan­ tion, governments loose their capac­ dards, whereas history as historicity ity to dominate historiography. In emphasizes particularity at the cost this context, questions related to of leading to moral relativism. How history and memory become impor­ did Chinese historians react to this tant. Official historiography ex­ dilemma? How did they relate to cludes personal and collective mem­ concepts of world history? t

inter-penetrations and mutual con­ flicts between ‘European’ and ‘Asiat­ ic faiths and cultural systems, no­ tably those upheld by Hanafi Sunni Islam and Russian Orthodox Chris­ tianity. Since the mid-sixteenth century, European-born value systems were spread towards the east and south along with the expansion of the Russian Empire. The co-existence of these systems and religions has often been problematic, especially be­ tween Christians and Muslims. A range of research questions relevant for a global understanding of the present Inner Eurasian societies, in­ cluding the Russian society itself, can be formulated on the basis of these considerations. We will try, in particular, to see how neighbouring religions and value systems react to each other, sometimes very rapidly, according to changing political, economic and so­ cial environments. We will also try to understand how the status, the organization, and the strategies of the intellectual and spiritual au­ thorities (the guarantors of these re­ ligions and value-systems) also change according to the same envi­ ronments. Our chronological frame­ work is the twentieth century, from the renewal of Orthodox missionary activity in the first decades of

ories, lacks concreteness and stresses theoretical explanation and evalua­ tion. Unofficial histories stand out by the concreteness of their descrip­ tions and the lack of theoretical ex­ planation. What is the relationship between individual, communicative, and cul­ tural memory, and official and nonofficial, academic and non-academic forms of history writing? How can we explain the ambivalence within academic historiography towards el­ ements of collective memory? How and what kinds of sources do non­ academic historians collect and how do they work on them? ■