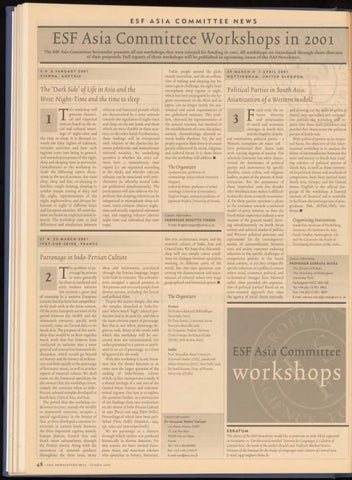 ESF Asia Committee Workshops in 2001 The ESF Asia Committee hereunder presents all ten workshops that were selected for funding in 2001. All workshops are introduced through short abstracts o f their proposals. Full reports o f these workshops will be published in upcoming issues o f the HAS Newsletter.

The &#39;Dark Side’ o f life in Asia and the West: Ni^ht-Time and the time to sleep r I 1 his workshop will I generate theoretiJL cal and empirical notions based on the so­ cial and cultural mean­ ings of night-time and the time to sleep. It is directed to­ wards the time regime of common, everyday activities and how such regimes come into being in general, and towards perceptions of the night, sleep and sleeping time in particular. Contributions to the workshop in­ clude the following topics: dicen­ trism in the social sciences, day-time sleep, sleep and fear, co-sleeping in families, rough sleeping, sleeping in combat troups, timing of sleep and the night, representations of the night, nightworkers, and deviant be­ haviour at night in different Asian and European societies. All contribu­ tions are based on empirical social re­ search. The workshop aims to find differences and similarities between

cultures and historical periods which are characterized by a strict attitude towards the regulation of night-time and sleep, on the one hand, and those which are more flexible in these mat­ ters, on the other hand. Furthermore, these findings will be interpreted with relation to the distinction be­ tween polychronic and monochronic oriented societies. An underlying question is whether the strict cul­ tures have a monochronic time regime (i.e. are organized according ro the clock), and whether tolerant cultures can be associated with polychronism (ie. whereby several tasks are performed simultaneously). The participants will also address the hy­ pothesis that sleeping cultures can be categorized as monophasic sleep cul­ tures, siesta cultures (shorter nighttime and socially regulated afternoon nap), and napping cultures (shorter night-time and individual day-time naps).

tronage by princes JL or more generally by elites in medieval and early modern societies has received a great deal of attention in a western European context, but has been less comprehen­ sively dealt with in the Asian context. Of the extra-European societies of the period between the twelfth and the nineteenth centuries, specific work certainly exists on Central Asia or on South Asia. The purpose of this work­ shop thus would be to draw together much work that has hitherto been conducted in isolation into a more general and interactive framework for discussion, which would go beyond art history and the history of architec­ ture and look equally at the patronage of literature, music, as well as at other aspects of material culture. We shall insist on the historical specificity for the context that the workshop covers, namely the centuries when an IndoPersian cultural complex developed in South Asia, Central Asia, and Iran. The period that the workshop en­ deavours to cover, namely the twelfth to nineteenth centuries, occupies a special significance in the history of Asia, as there developed a constant in­ teraction at various levels between the three important regions, namely Iranian plateau, Central Asia and South Asian subcontinent through the Persian matrix. Along with the movement of material products throughout the three areas, many 48 •

ideas and institutions, articulated through the Persian language, began to be held in common. The subconti­ nent occupied a special position in this process and attracted people from diverse streams, including the literati and political elites. To put the matter simply, this was the complex identified as Tndo-Persian’ where much ‘high’ cultural pro­ duction had to be paid for, and this is the most obvious aspect of patronage. But this is not where patronage be­ gins or ends. Many of the works with which this workshop will be con­ cerned were not commissioned, but rather presented to a patron or attrib­ uted to an act of patronage, as a form of approval for the work. With this workshop it is our inten­ tion that the theme function as an entry into the larger question of the making of Indo-Persian culture which, in fact, incorporates a study of a shared heritage of a vast area of the Central Asian, Iranian and subconti­ nental regions. Our aim is to explore the question further, in continuation of the findings from two conferences on the theme of Indo-Persian Culture in 1992 (Paris) and 1994 (New Delhi). Proceedings of which have been pub­ lished (New Delhi: Manohar, 1994, rpt. 1995, and 2000 respectively). We see patronage as a manner through which culture was produced historically in diverse domains. For this reason, we have invited Euro­ pean, Asian, and American scholars who specialize in history, literature,

Today, people around the globe closely interrelate, and the co-ordina­ tion of waking and sleeping has be­ come a great challenge. An eight-hour monophasic sleep regime at night, which has been propagated by the hy­ giene movement in the West and in Japan, can no longer satisfy the eco­ nomical and social requirements of our globalized existence. This prob­ lem, observed by representatives of the natural sciences, has resulted in the establishment of a new discipline, namely, chronobiology, directed to­ wards bodily rhythms. Yet, the way people organize their lives is of course greatly influenced by social, religious and cultural forces. It is these forces that the workshop will address. ■

fine arts, architecture, music, and the material culture of India, Iran and Central Asia. We hope that this work­ shop will not simply create condi­ tions for dialogue between specialists working in different parts of the world, but also raise questions con­ cerning the dissemination and main­ tenance of cultural values over huge geographical and historical spaces. ■

Political Parties in South Asia: Asianization o f a Western model? ■ t aced with the exl -^ treme diversity J - and polarization of social and economic cleavages in South Asia, and the fragility of polit­ ical institutions, political parties - a Western transplant on Asian soil have performed their classic tasks with varying degrees of success. The scholarly literature has often charac­ terized the dominance of political parties and movements by specific families, castes, tribes, and religious leaders, as part of the process of mod­ ernization. But the persistence of these ‘anomalies’ even five decades after decolonization makes it difficult to describe them as merely transition­ al. Do these parties represent a phase in the evolution towards a universal model of party systems, or does the South Asian experience indicate a new mutant of the general model, draw­ ing simultaneously on South Asian society and cultural modes of politics and Western political processes and aspirations? Do the contemporary modes of intermediation between state and society represent enduring solutions to the specific challenges of competitive politics in the South Asian context, or are they temporally specific solutions to a political context where social, economic, political, and ecclesiastical changes have followed rather than preceded the organiza­ tion of political parties? Based on an actor-oriented approach that takes the agency of social forces seriously,

and drawing on the skills of political theory, area specialists and compara­ tive politics, the workshop will in­ quire into these main paradoxes and puzzles that characterize the political parties of South Asia. With political parties as its empir­ ical focus, the objective of this inter­ national workshop is to analyse the forms of intermediation between the state and society in South Asia. Lead­ ing scholars of political parties of South Asia, as well as those interest­ ed in political theory and methods of comparison, have been invited from South Asia, Europe, and the United States. English is the official lan­ guage of the workshop. A limited amount of financial aid is available to facilitate the participation of postgraduate (MA, M.Phil./PhD) stu­ dents. ■