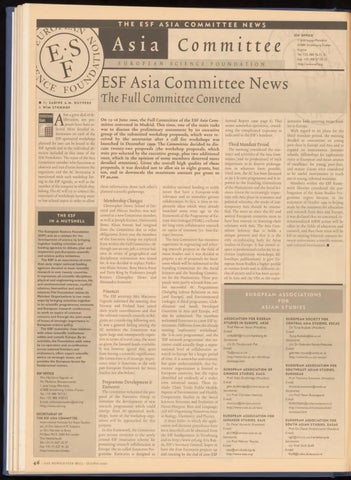 far a great deal of de­ liberation, ten pro­ posals have been se­ lected. More detailed in­ formation on each of the ESF-sponsored workshops planned for 2001 can be found in the ESF Agenda and in the individual ab­ stracts included in this issue of the HAS Newsletter. The name of the Asia Committee member who functions as observer and trait d’union between the organizers and the AC Secretariat is mentioned with each workshop list­ ing in the ESF Agenda, as well as the number of the category to which they belong. The AC will try to connect the convenors of workshops having more or less related topics in order to allow

On 15-16 June 2000, the Full C om m ittee o f the ESF Asia Com­ m ittee convened in Madrid. This tim e, one o f the m ain tasks was to discuss the prelim inary assessm ent by its executive group o f the subm itted workshop proposals, which were re­ ceived by the secretariat after a call for workshops was launched in Decem ber 1999. The C om m ittee decided to dis­ cuss tw enty-tw o proposals (the workshop proposals, which were pre-selected by the executive group, plus two additional ones, which in the opinion o f som e m em bers deserved more detailed attention). Given the overall high quality o f these proposals, it was decided not to allot six to eigh t grants, but ten, and to downscale the m axim um am ount per grant to FF 90,000. them information about each other’s planned scientific gatherings.

mobilize national funding to tackle issues that have a European-wide relevance and to stimulate greater Membership Changes collaboration. In fact, it tries to im­ Christopher Howe, School of Ori­ plement ideas which were already ental and African Studies, was wel­ launched some time ago in the comed as a new Committee member, framework of the Programme of Euas well as Joseph Kreiner, Universitat rope-Asia Linkages (PEARL), a scheme Bonn. Klaus Antoni had resigned for long-term collaborative research from the Committee due to other on topics of common (i.e. Asia-Euobligations. Every year the members rope) interest. of the Executive Group are replaced The Asia Committee has extensive from within the Full Committee. Al­ experience in organizing and select­ though not an easy job, a certain bal­ ing research projects in the field of ance in terms of geographical and Asian Studies and it was decided to disciplinary orientation was aimed prepare a set of proposals for Euro­ for. It was decided to replace Profes­ cores which will be submitted to the sors Klaus Antoni, Rosa Maria Perez Standing Committee for the Social and Terry King by Professors Joseph Sciences and the Standing Commit­ Kreiner, Chistopher Howe and tee for the Humanities. These pro­ Alessandra Avanzini. posals were partly selected from ear­ lier successful AC Programmes: Finances Changing Labour Relations in Asia The ESF secretary Mrs Marianne (and Europe), and Environmental Yagoubi informed the meeting that Linkages. A third programme, Glob­ Norway and Finland have raised alization and Small, Developed their yearly contributions and that Countries in Asia and Europe, will the relevant research councils in Bel­ also be submitted. The members gium are considering following suit. welcomed Eurocores as a new ESF in­ It was a general feeling among the strument. Different from the already AC members the Committee was existing ‘exploratory workshops’, quite large and consequently expen­ the ‘a-la carte programmes’, and the sive in terms of travel costs, the more ‘ESF network programmes’ this ini­ so given the limited funds available. tiative could actually forge a supra­ It was however agreed that, apart national level of collaborative re­ from having a scientific significance, search in Europe for a longer period the Committee is of strategic impor­ of time. It is somewhat unfortunate, tance since it functions as the only but quite understandable, that Eu­ pan-European framework for Asian rocores’ organization is limited to Studies (see also below). European countries, but the topics identified are evidently of a wider, Program m e Development &amp; even universal nature. These in­ Eurocores clude: Clinic Trials; Public Health; The committee welcomed the pro­ Aspects of Environment and Health; posal of the Executive Group to Comparative Studies in the Social stimulate the development of new Sciences; Structure and Evolution of research programmes which could Ocean Margins; Man and Language; emerge from AC-sponsored work­ and Self-Organizing Nanostructures shops. Some of the workshop orga­ in Biology, Chemistry, and Physics. nizers will be approached for this A short folder in which the appli­ purpose. cation and decision procedures have In this framework, the Committee been described can be obtained from gave serious attention to the newly | the ESF headquarters in Strasbourg created ESF innovative scheme for and on http://www.esf.org. Eric Ban­ promoting research collaboration in da, ESF’s Secretary General, hopes to Europe: the so-called Eurocores Pro­ have the first Eurocores projects up gramme. Eurocores is designed to and running by the end of 2000 (ESF

T hird Mandate Period The meeting considered the exis­ tence and activities of the Asia Com­ mittee (and its predecessor) of such importance as to deserve prolonga­ tion in whatever form possible. Until now, the AC has been financed as an a-Ia carte programme and it re­ ported to the Standing Committees of the Humanities and the Social Sci­ ences. Given the increasingly impor­ tant role Asia plays in economic and political relations, the study of con­ temporary Asia should be intensi­ fied. The more so since the EU and several European countries seem to have lost interest in fostering their relations with Asia. The Asia Com­ mittee believes that it holds a unique position and that it is the only co-ordinating body for Asian Studies in Europe. It has earned re­ spect in professional circles for its ac­ tivities (exploratory workshops, fel­ lowships, publications). It gave Eu­ ropean Asian Studies a higher profile at various levels and in different cir­ cles of society and it has been accept­ ed in Asia and the USA as the repre­

sentative body covering Asian Stud­ ies in Europe. With regard to its plans for the third mandate period, the meeting decided to concentrate on young post-docs in Europe and Asia and to expand its instruments. Summer schools, fellowships for exploratory visits to European and Asian centres of excellence for young post-docs, and master classes were considered to be useful instruments to reach out to young, talented Asianists. Members within the ESF frame­ work likewise considered the pro­ longation of the Asian Studies Pro­ gramme urgent because, in the statement of October 1999 in Beijing made by the ministers for education and research from Asia and Europe, it was declared that no concerted, in­ stitutionalized ASEM action will be taken in the fields of education and research, and that these areas will be left to existing bilateral contacts be­ tween universities, scientific centres, and cultural institutions. ■