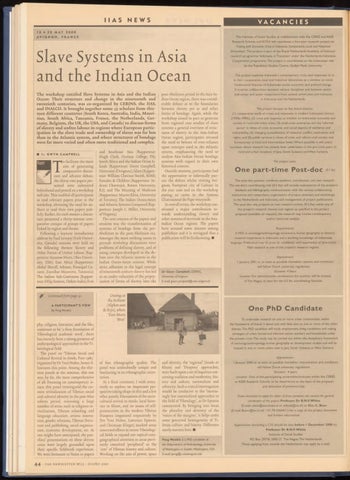 The Institute of Social Studies, in collaboration with the CERES and ASSR Research Schools and KITLV, will coordinate a four-year research project on

Slave Systems in Asia and the Indian Ocean The workshop entitled Slave Systems in Asia and the Indian Ocean: Their structure and change in the nineteenth and twentieth centuries, was co-organized by CERINS, the HAS, and INALCO. It brought together some 35 scholars from thir­ teen different countries (South Korea, Australia, India, Mauri­ tius, South Africa, Tanzania, France, the Netherlands, Ger­ many, Belgium, the UK, the USA, and Canada) to discuss forms o f slavery and unfree labour in regions where European partic­ ipation in the slave trade and ownership o f slaves was far less than in the Atlantic system, and where structures o f bondage were far more varied and often more traditional and complex. ■ By GWYN CAMPBELL

Continued from page 41 A PARTICIPANT&#39;S VIEW By Peng Wenbin

phy, religion, literature, and the like, continues to be ‘a firm foundation of Tibetological academic work’, there has recently been a strong presence of anthropological approaches in the Ti­ betological field. The panel on ‘Tibetan Social and Cultural Revival in Amdo, Post-1980,’ organized by Dr Toni Huber, better il­ lustrates this point. Among the thir­ teen panels at the seminar, this one was, by far, the most comprehensive of all. Focusing on contemporary is­ sues, this panel investigated the cre­ ative revitalization of Tibetan social and cultural identity in the post-Mao reform period, traversing a large num ber of areas, such as religious re­ vitalization, Tibetan schooling and language education, artistic innova­ tion, gender relations, Tibetan litera­ ture and publishing, social organiza­ tion, economic development, etc. As one m ight have anticipated, the pan­ elists’ presentations on these diverse areas were largely grounded upon their specific fieldwork experiences. We were fortunate to listen to papers 4 4 ‘ IIAS

and Southeast Asia (Rapporteur: Hugh Clark, Ursinus College, PA); South Africa and the Indian Ocean Is­ lands (Rapporteur: Gwyn Campbell, Université d’Avignon); Islam (Rappor­ teur: William Clarence Smith, SOAS); Females &amp; Children (Rapporteur: Indrani Chatterjee, Brown University, R.I); and The Meaning o f Abolition (Rapporteur: Martin Klein, University of Toronto); The Indian Ocean/Asian and Atlantic Systems Compared (Rap­ porteur: Joseph C. Miller, University of Virginia). The core concern o f the papers and sessions was the transformation of systems of bondage from the preAbolition to the post-Abolition era. Amongst the most striking issues to pervade workshop discussions were problems o f defining slavery, and of using concepts developed in the de­ bate over the Atlantic system in the Indian Ocean-Asian context. While strict adhesion to the legal concept of nineteenth century slavery has led to an under-valuation o f the perpet­ uation o f forms of slavery into the

post-Abolition period in theAsia-Indian Ocean region, there was consid­ erable debate as to the boundaries between slavery per se and other forms of bondage. Again, while the workshop aimed in part to generate from regional case studies of slave systems a general overview of struc­ tures of slavery in the Asia-Indian Ocean region, participants stressed the need to beware o f over-reliance upon concepts used in the Atlantic system, emphasizing the need to analyse Asia-Indian Ocean bondage systems with regard to their own historical context. Outside sessions, participants had the opportunity to informally pur­ sue the debate whilst visiting Avi­ gnon, European city o f Culture in the year 2000 and on the workshop outing to caves in the famous Chateauneuf du Pape vineyards. In overall terms, the workshop con­ stituted a major contribution to­ wards understanding slavery and other systems of servitude in the AsiaIndian Ocean regions. The papers have aroused some interest among publishers and it is envisgaed that a publication will be forthcoming. ■

‘Coping with Economic Crisis in Indonesia: Comparative, Local and Historical Dimensions&#39;. The project is part of the Royal Netherlands Academy of Sciences’ research programme ‘Indonesia in Transition’ under the Netheriands-lndonesia Cooperation programme.The project is coordinated on the Indonesian side by the Population Studies Centre, Gadjah Mada University. The project explores Indonesia&#39;s contemporary crisis, and responses to it, in their comparative, local and historical dimensions as a window on more fundamental features of Indonesian social, economic and political change. It involves collaboration between various disciplines and between senior, mid-career and junior researchers from several universities and institutes in Indonesia and the Netherlands. The project focuses on five linked themes: (I) comparative study of crises and responses in modern Indonesian history (1930s-1990s), (2) crisis and response as window on Indonesian economy and society in rural and urban areas, (3) small-scale enterprise and the ‘informal sector’ in times of crisis: economic and social aspects of resilience and vulnerability, (4) changing constellations of resource conflict, institutions and rights, and (5) public services in times of crisis and reform: civil society and bureaucracy at local and intermediate levels. W here possible it will select locations where research has already been undertaken in the pre-crisis years, in rural and urban locations of Java, South Sulawesi and West Sumatra. The project seeks:

O ne part-tim e Post-doc The post-doc position combines academic coordination and own research. The ost-doc’s coordinating role (0.5 fte) will include maintenance of the project’s database and bibliography, communication with the various collaborating institutions and researchers, organization of project seminars and workshops in the Netherlands and Indonesia, and management of project publications. The post-doc may propose an own research activity (0.2 fte) within any of the project&#39;s research themes and regions as specified in the project proposal (available on request); the research may involve contemporary and/or historical analysis. Requirements: A PhD in sociology/anthropology, economics, human geography or history; research experience in Indonesia and a working knowledge of Indonesian language. Preference may be given to candidates with experience of (pre-crisis) field research in one of the project’s research regions. Appointment: I January 2001 or as soon as possible thereafter; salaries and conditions will follow Dutch university regulations

Duration: 4 Years Location: For administrative convenience the position will be located in The Hague, at least for the 0.5 fte coordinating function.

O n e PhD C a n d i d a t e To undertake research on one or more urban communities, within the framework of theme 2 above and with links also to one or more of the other themes.The PhD candidate will study employment, living conditions and coping strategies of urban formal and informal sector workers and households under the present crisis.The study may be carried out within the disciplinary framework of sociology/anthropology, human geography or development studies and will be located in one or more urban sites in Java, South Sulawesi or West Sumatra. Appointment:

o f fine ethnographic quality. The panel was undoubtedly unique and fascinating in its ethnographic orien­ tation. As a final comment, I wish tenta­ tively to explore an important per­ spective taking shape in this and a few other panels. Discussions of the socio­ cultural revival in Amdo, local histo­ ries in Kham, and on issues of self­ presentation in the modern Tibetan Diaspora (organized respectively by Drs Toni Huber, Lawrence Epstein, and Christaan Klieger) marked some concerted efforts in recent Tibetologi­ cal fields to expand our topical-cumgeographical attention to areas previ­ ously conceived ‘peripheral’ to the ‘core’ of Tibetan history and culture. Working on the axis of power, space

and identity, the ‘regional’ (Amdo or Kham) and ‘Diaspora’ approaches, were built upon a set o f inquiries con­ cerning tradition and modernity, his­ tory and culture, nationalism and ethnicity. Such a critical interrogation would be conducive to the ‘increas­ ingly less essentialized approaches in the field ofTibetology’, as Dr Epstein commented. By bringing into focus the plurality and diversity of the ‘voices of the margins’, it helps unfix some perceived homogeneity of Ti­ betan culture and history. Difference surely matters here. ■ Peng Wenbin is a PhD candidate at the Department of Anthropology, University ofWashington in Seattle, Washington, USA. E-mail: peng@ti.washington.edu

I January 2000 or as soon as possible thereafter; remuneration and conditions will follow Dutch university regulations. Duration : 4 years Location : One of the participating universities/institutes within the CERES or ASSR Research Schools, to be determined on the basis of the proposal and allocation of promotorship. Those interested to apply for either of these positions can contact the general coordinator of the project Professor Dr B.N.F. W hite (E-mail: white@nias.knaw.nl or whiteb@iss.nl) or Drs. C. Boer (E-mail: Boerc@iss.nl, tel. +31-70-4260411) for a copy of the project document and further information. Applications (including a CV) should be sent before I D ecem ber 2000 to: Professor Dr B.N.F. W hite Institute of Social Studies PO Box 29776,2502 LT The Hague.The Netherlands. Those applying from outside the Netherlands may apply by e-mail.