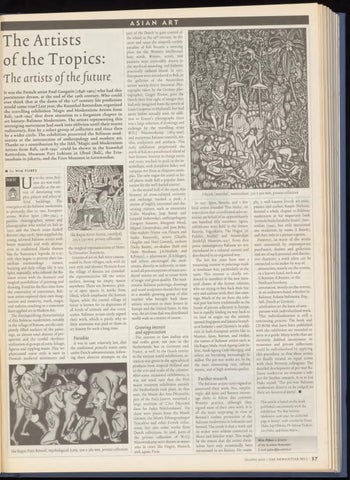 part of the Dutch to gain control of the island in the 19th century. In the 1920s and 1930s the unspoilt earthly paradise of Bali became a meeting place for the Western intellectual beau monde. Writers, actors, and painters were irresistibly drawn to the mythical-sounding and hitherto practically isolated island. In 1917, Europeans were introduced to Bali, in the galleries of the Amsterdam artists’ society Arti et Amicitiae. Pho­ It was the French artist Paul Gauguin (1848-1903) who had this tographs taken by the German pho­ portentous dream, at the end o f the 19th century. Who could tographer, Gregor Krause, gave the ever think that at the dawn o f the 21st century his prediction Dutch their first sight of images they would come true? Last year, the Kunsthal Rotterdam organized had only imagined from the novels of the travelling exhibition ‘Magic and Modernism: Artists from Louis Couperus or Multatuli, but had Bali, 1928-1942’ that drew attention to a forgotten chapter in never before actually seen. In addi­ art history: Balinese Modernism. The artists representing this tion to Krause’s photographs there intruiging movement had sunk into oblivion until their recent was a large selection of drawings and rediscovery, first by a select group o f collectors and since then etchings by the travelling artist by a wider circle. The exhibition presented the Balinese mod­ W.O.). Nieuwenkamp (1874-1950). ernists at the intersection o f anthropology and modem art. and numerous Balinese utensils, tex­ Thanks to a contribution by the HAS, ‘Magic and Modernism: tiles, sculptures and artefacts. This Artists from Bali, 1928-1942’ could be shown in the Kunsthal early exhibition perpetuated the Rotterdam, Museum Puri Lukisan in Ubud (Bali), the Eras- myth ofBali as a paradisiacal island of bare breasts. Interest in things exotic mushuis in Jakarta, and the Fries Museum in Leeuwarden. and erotic reached its peak in the in­ terbellum, with Josephine Baker and S iS ifc S t St. rampant Art Deco as eloquent exam­ By WIM PUBES ples. The new vogue for travel to farp to the 1920s, Bali­ off places made Bah a popular desti­ nese art was tradi­ nation for the well-heeled tourist. tionally at the ser­ In the second half of the 1930s, this vice of decorating tem­ I ferment of cross-cultural curiosity ples, palaces and other of­ and exchange reached a peak; a ficial buildings. The stream of highly interested and dis­ emergence of the Balinese modernists cerning visitors, such as musicians is primarily due to two European (Colin Macphee, Jaap Kunst and artists: Walter Spies (1880-1942), a Leopold Stokowsky), anthropologists painter, choreographer, writer and (Gregory Bateson, Margaret Mead, photographer who settled on Bali in Miguel Covarrubias, and Jane Belo), 1927, and the Dutch artist Rudolf film-makers (Victor von Plessen and Ida Bagus Ketut Soenia, (untitled), Bonnet (1895-1978)- Spies supplied the Andre Roosevelt), actors (Charlie 255 x 350 mm, private collection young, talented Balinese artists with Chaplin and Noel Coward), authors better materials and with alterna­ (Vicky Baum), art-dealers (Rolf and the magical representations of Henri tives to traditional Hindu themes Hans Neuhaus, JAHoubolt and ‘Le Douanier’ Rousseau. like the ‘Ramanaya’ legends. As a re­ B.Preyer), a pharmacist (E.Schlager), Centres of art on Bali were concen­ sult, they began to portray their im­ and others encouraged the mod­ trated in three villages, each with its mediate surroundings - nature, ernists, directly or indirectly, to tran­ own style and themes. Pictures from hunting and daily village life. It was scend all preconceptions of mass-pro­ the village of Batuan are crowded: Spies, especially, who infused the Ba­ duced tourist art and to create work the representations fill the entire linese artists with the dramatic and of magic and great quality. The mod­ surface, leaving no empty spaces magical possibilities of painting and ernistic Balinese paintings, drawings anywhere. There are, however, plen­ drawing. Freed for the first time from and wood sculptures found their way ty of open spaces in works from the constraints of convention, Bali­ to a steadily growing group of elite Ubud, which emphasize the human nese artists explored their own imag­ tourists who brought back these figure, while the coastal village of ination and creativity, myth, magic, artistic souvenirs to their homes in Sanur is known for its depictions of and realities resulting in a transition Europe and the United States. In this all kinds of animals and also erotic from applied art to Modern Art. way, the art from Bali was distributed scenes. Balinese artists rarely signed The distinguishing characteristics world-wide as a matter of course. their work, which is partly why so of this Balinese modernism, notably little attention was paid to them in in the village of Batuan, are the com­ Growing interest art history for such a long time. pletely filled surfaces of the paint­

The Artists of the Tropics:

The artists of the future

ings, an almost total absence of per­ spective and the careful rhythmic stylization ofgroups of trees, foliage, figures and rippling water. This ‘so­ phisticated’ naive style is seen in Flemish medieval miniatures and

The interest in East Indian arts Paradise and crafts grew, not just in the It was in 1906, relatively late, that Netherlands but in Germany and the traditional princely states came France, as well. In the Dutch entries under Dutch administration, follow­ to the various world exhibitions, at­ ing three abortive attempts on the tention was given to the agricultural products from tropical Holland and to the arts and crafts of the colonies. After some occasional exhibitions, it was not until 1927 that the first major museum exhibition outside the Netherlands took place. In that year, the Musée des Arts Décoratifs, part of the Paris Louvre, mounted a large overview of ‘L’Art Décoratif dans les Indes Néerlandaises’. On show were pieces from the Musée Guimet, the Musée Ethnographique Trocadéro and other French collec­ tions, but also some works from Dutch collections. In 1928, parts of the private collection of W.O.J. I Nieuwenkamp were shown in muse­ ums in cities like Hagen, Munich, Ida Ba^jus Putu Bentoel, Mythological Scene, 500 x 380 mm, private collection and, again, Paris.

I Resek, (untitled), watercolour, 320 x 500 mm, private collection ple, a well-known Dutch art-critic, painter and author, Kaspar Niehaus, devoted a whole chapter to Balinese modernism in his important book ‘Levende Nederlandsche Kunst’, Ams­ terdam [1942], but only mentioned one modernist by name (I Reneh), and then only in a picture caption. However, as many of the works were annotated by contemporary purchasers, dealers and gallerists, and are of such personal and distinc­ tive character, a work often can be connected to its maker by way of: - annotation, mostly on the reverse, in a known hand, such as of G.Bateson, R.Bonnet, or the Neuhaus brothers; - annotation, mostly on the reverse, in an unknown hand, whether in Balinese, Bahasa Indonesia, Eng­ lish, Dutch or German; - attribution on the basis of com­ parison with individualized work. This individualization is still a continuing process. The book and CD-ROM that have been published with the exhibition are intended to serve as a guide. Many works that are currently dubbed anonymous in museums and private collections could be individualized by applying this procedure, so that these artists are finally treated on equal terms with their Western colleagues. The detailed development of pre-war Ba- | linese modernist art remains a subject for further research. It is as Leo | Further research Haks stated: ‘The pre-war Balinese The Balinese artists rarely signed or modernists deserve to be judged on annotated their work. Nor, surpristheir art-historical merit’. ■ ingly, did Spies and Bonnet encour­ age them to follow this common - This article is based on the book Western practice, although they published concurrently with the signed most of their own work. It is exhibition: ‘Pre-War Balinese all the more surprising in view of Modernists 1928-1942: An additional Bonnet’s tireless promotion of the pa^e in history&#39;, with articles by Frans Balinese modernists in Indonesia and Haks, Jop Ubbens, Dr Adrian Vickers, beyond. The result is that a work and Leo Haks, and Guus Maris. its maker were seldom connected in direct and familiar ways. This might Wim Pijbes is director be the reason that the artists them­ o f the Kunsthal Rotterdam. selves have only occasionally been E-mail: pijbes@kunsthal.nl mentioned in art history. For exam­

In 1937, Spies, Bonnet, and a few local artists founded ‘Pita M aha, an association that co-ordinated sales ac­ tivities on behalf of its approximately one hundred fifty members. Again, exhibitions were held in the former Batavia, Yogyakarta, The Hague (at Pulchri Studio) and Amsterdam (Stedelijk Museum,1937). From that point contemporary Balinese art was introduced in a cultural context and distributed in an organized way. The last few years have seen a mounting interest in paintings made in Southeast Asia, particularly in the 1920s. This interest is chiefly evi­ denced in members of the new mon­ eyed classes of the former colonies, who are trying to buy back their his­ tory and culture with their fast earn­ ings. Much of the art from the colo­ nial past has been traditionally in the hands of private collectors in Europe, but is rapidly finding its way back to its land of origin via the recently opened Singapore and Jakarta branch­ es of Sotheby’s and Christie&#39;s. In addi­ tion to Indo-European artists like Le j Mayeur, Spies, Bonnet, and Hofket, the names of Balinese artists such as Ida Bagus Made, Anak Agung Gede Sobrat, Anak Agung Gede Meregeg, and others are becoming increasingly fa­ miliar. The pre-war works are, by far, the most interesting: rare, refined, mystic, and of high aesthetic quality.