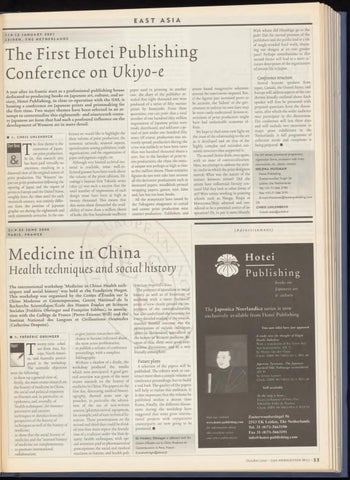 ASIA With whom did Hiroshige go to the pub? Did the eternal pressure of the publishers and the public lead to a life of single-minded hard work, churn­ ing out designs at an ever greater pace? Perhaps contributions to this second theme will lead to a more ac­ curate description of the organization of artistic life in Japan.

The First Hotei Publishing Conference on Ukiyo-e A year after its frantic start as a professional publishing house dedicated to producing books on Japanese art, culture, and so­ ciety, Hotei Publishing, in close co-operation with the IIAS, is hosting a conference on Japanese prints and printmaking for the first time. Two major themes have been selected in an at­ tempt to contextualize this eighteenth- and nineteenth centu­ ry Japanese art form that had such a profound influence on the development o f Western art in more detail. By CHRIS UHLENBECK

he first theme is the economics of Japan__ ese print production. So far, this research area has been paid virtually no attention, resulting in a distorted view of the original nature of print production. The ‘Western’ im­ pact on print production following the opening of Japan and the export of prints to Europe and the United States, roughly from the t86os until the early twentieth century, was entirely differ­ ent from the position of Japanese graphic art during the eighteenth and early nineteenth centuries. In the con­

ference we would like to highlight the sheer volume of print production, the economic rationale, seasonal aspects, specialization among publishers, trade organizations, and the organization of paper and pigment supply, etc. Although very limited archival ma­ terial is available, some well-in­ formed guesses have been made about the volume of the print editions. Hi­ roshige’s famous first Tokaido series (1832-33) was such a success that the total number of impressions of each design must have been as high as twenty thousand. This means that this series alone demanded the avail­ ability of more than a million sheets of hosho, the fine handmade mulberry

paper used in printing. In another case, the diary of the publisher re­ vealed that eight thousand sets were produced of a series of fifty warrior prints by Kuniyoshi. From these quantities, one can posit that a total number of one hundred fifty million impressions of Japanese prints were made, distributed, and sold over a pe­ riod of just under one hundred fifty years. Of course, production was un­ evenly spread: production during the 1770s was unlikely to have been more than two hundred thousand sheets a year, but in the heydays of print-se­ ries productions, the 1850s, the annu­ al output was perhaps as high as four to five million sheets. These tentative figures do not even take into account all the derivative productions such as decorated papers, woodblock printed wrapping papers, games, toys, kites and, last but not least, books. All the sumptuary laws issued by the Tokugawa shogunate to curtail and censor print production were counter-productive. Publishers and

Several keynote speakers from Japan, Canada, the United States, and artists found imaginative solutions Europe will address aspects of the two around the restrictions imposed. But, themes broadly outlined above. Each if the figures just surmised prove to speaker will first be presented with be accurate, the ‘failure’ of the gov­ prepared questions from the discus­ ernment to enforce its own laws may sants, after which the wider audience be more easily understood. Serious re­ may participate in the discussions. strictions of print production might The conference will last three days have had undesirable economic ef­ and will include two excursions to fects. major print exhibitions in the We hope to shed some new light on Netherlands. A full programme of the issue of the relationship to the art collective meals and receptions is as it developed and on that of the being prepared. ■ highly complex and extended eco­ nomic structure that supported it. For full details, provisional programme, The second theme deals, once again, registration forms, assistance with hotel with an issue of contextualization. reservations, etc., please contact Here, we attempt to address the artis­ HELENA HUISMAN tic circles in which the print designers Hotei Publishing moved: What was the nature of the Z oeterw oudse Singel 56 contact between artists? Did the Leiden, the Netherlands artists have influential literary con­ Tel:+31-71-566 3190 tacts? Did they look at other forms of Fax:+31-71-566 3191 art? Were artists working in painting E-mail: hhuisman@hotei-publishing.com schools such as Nanga, Rinpa or Or Maruyama/Shijo admired and con­ CHRIS UHLENBECK sidered to be a potential source of in­ E-mail: ukiyo@ xs4all.nl spiration? Or, to put it more bluntly:

Health techniques and social history The international workshop ‘Medicine in China: Health tech­ niques and social history’ was held at the Fondation Hugot. This workshop was organized by the Centre d’Études sur la Chine Moderne et Contemporaine, Centre National de la Recherche Scientifique/École des Hautes Études en Sciences Sociales (Frederic Obringer and Franqoise Sabban), in associa­ tion with the College de France (Pierre-Étienne Will) and the Institut National des Langues et Civilisations Orientales (Catherine Despeux). - to give junior researchers the chance to become informed about the most acute problematics; wenty-nine schol­ to publish a volume of conference ars from Asia, Eu­ proceedings, with a complete rope, North Ameri­ bibliography. ca, and Australia partici­ Without a shadow of a doubt, the pated in the workshop. workshop produced the results The scientific objectives which were anticipated. A good gen­ were the following: eral overview was given of the most - to draw up a general view of, recent research on the history of firstly, the most recent research on medicine in China. The papers on the the history of medicine in China, first day, discussing medical histori­ the social and political responses ography, showed some new ap­ to illnesses and, in particular, to proaches, in particular the advoca­ epidemics; and, secondly, of tion of the use of non-written ‘health techniques’, for instance sources (pharmaceutical equipment, preventive and curative for example) and ofnon-technical lit­ techniques or dietetics from the erature. Those presentations on the perspective of the history of techniques as well of the history of second and third days could be divid­ ed into four main topics: the founda­ medicine; tion of a tradition under the Han dy­ - to show that the social history of medicine and the ‘internal history’ nasty; health techniques, with spe­ cial attention paid to pharmaceutical of medicine are complementary; prescriptions; the social and medical - to promote international reactions to famine; and health policollaboration; By FRÉDÉRIC OBRINGER

cy in Late Imperial China. The presence of specialists in social history as well as of historians of medicine with a more ‘technical’ point of view clearly proved the im­ portance of the contextualization, but also underlined the necessity for a very detailed reading of the sources. Another fruitful outcome was the participation of various colleagues (often as discussants) specialized in the history of Western medicine. Be­ cause of this, there were good com­ parative discussions, and in a very friendly atmosphere.

Future plans A selection of the papers will be published. The editors wish to con­ struct more than a simple volume of conference proceedings, but to build a real book. The quality of the papers will help to realize this ambition. It is also important that the volume be published within a decent time frame. Finally, the different discus­ sions during the workshop have suggested that some great interna­ tional projects with comparative counterparts are now going to be promoted. ■ Dr Frédéric Obringer is affiliated with the