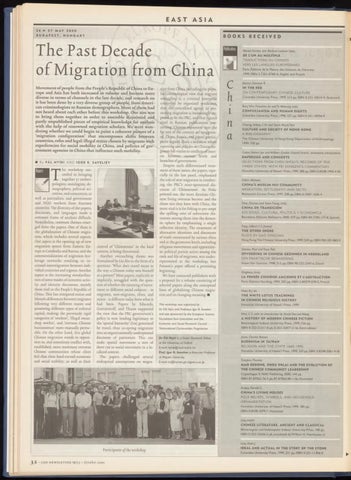 The Past Decade of Migration from China Movement o f people from the People’s Republic o f China to Eu­ rope and Asia has both increased in volume and become more diverse in terms o f channels in the last decade, and research on it has been done by a very diverse group o f people, from Ameri­ can criminologists to Russian demographers. Most o f them had not heard about each other before this workshop. Our aim was to bring them together in order to assemble disjointed and partly unpublished pieces o f empirical knowledge for analysis with the help o f renowned migration scholars. We were won­ dering whether we could begin to paint a coherent picture o f a ‘migration configuration’ that encompasses shifts between countries, roles and legal/illegal status chosen by migrants with expediencies for social mobility in China, and policies o f gov­ ernment agencies in China that influence such mobility. By PAL NYl&#39;RI A N D IGOR R. SAVELIEV

he workshop suc­ ceeded in bringing together 37 anthro­ pologists, sociologists, de­ mographers, political sci­ entists, and economists, as well as journalists, and government and NGO workers from fourteen countries. The diversity of the papers, discourses, and languages made a common frame of analysis difficult. Nonetheless, common themes emer­ ged from the papers. One of these is the globalization of Chinese migra­ tion, which includes several aspects. One aspect is the opening up of new migration spaces from Eastern Eu­ rope to Cambodia and Burma, and the commercialization of migration bro­ kerage networks resulting in in­ creased intermigration between indi­ vidual countries and regions. Another aspect is the increasing standardiza­ tion of some modes of economic activ­ ity and identity discourses, mainly those tied to the People’s Republic of China. This has mitigated status and lifestyle differences between migrants following very different routes and possessing different types of cultural capital, making the previously rigid categories o f‘student’, ‘illegal sweat­ shop worker’, and ‘overseas Chinese businessman’ more mutually perme­ able. On the other hand, this global Chinese migration stands in opposi­ tion to, and sometimes conflict with, established, more stationary overseas Chinese communities whose elites feel that their hard-earned economic and social stability, as well as their

control o f ‘Chineseness’ in the local context, is being threatened. Another overarching theme was formulated by Liu Xin in the form of a question: ‘What does travel mean to the way a Chinese today sees himself as a person?’ Most papers, explicitly or implicitly, struggled with the ques­ tion of whether the meaning of move­ ment to different social subjects - to migrants, non-migrants, elites, and states - is different today from what it had been. Papers by Edwards, Guerasimoff, and Thu no supported the view that the PRC government’s policy is now lending legitimacy to the ‘spatial hierarchy’ (Liu) generated by travel, thus co-opting migration into an organizationally underpinned discourse of patriotism. This can make spatial movement a sort of short cut to social movement in a lo­ calized context. The papers challenged several widespread assumptions on migra­

tion from China, including the popu­ lar criminological view that migrant smuggling is a criminal enterprise controlled by organized syndicates, that the centralized agency in pro­ moting migration is increasingly im­ puted to be the PRC, and that figures cited in Russian publications con­ cerning ‘Chinese expansion’ into the far east of the country are exaggerat­ ed. China, Russia, and Japan, partici­ pants argued, share a situation where reporting and policies on Chinese mi­ grants fall victim to conflicts of inter­ est between various levels and branches of government. Despite such differentiated treat­ ment of these issues, the papers, espe­ cially in the last panel, emphasized the role of new migration in reinforc­ ing the PRC’s state-sponsored dis­ course of ‘Chineseness’. As Pieke pointed out, the more dynamic Chi­ nese living overseas become and the closer ties they have with China, the more vital it is for Peking to pre-empt the spilling over of subversive dis­ courses among them into the domes­ tic sphere by emphasizing a single collective identity. The treatment of alternative identities and discourses of truth constructed by various elites and at the grassroots levels, including religious movements and opposition­ ist political parties active among the rank and file of migrants, was under­ represented at the workshop, but Poisson’s paper offered a promising beginning. We have contacted publishers with a proposal for a volume consisting of selected papers along the conceptual lines of globalizing Chinese migra­ tion and its changing meaning. ■ This workshop was organized by