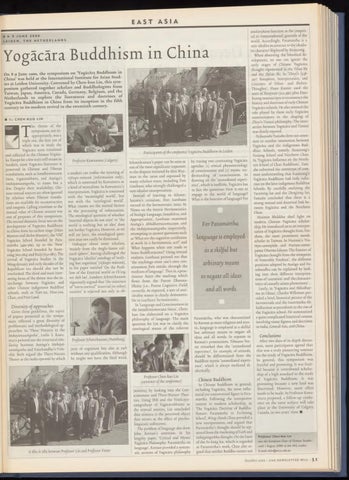 amalavtjnana function as the (empiri­ cal or transcendental) grounds of the world. Accordingly, Paramartha is a non-idealist in contrast to the idealis­ tic character displayed by Xuanzang. When observing the historical de­ velopment, no one can ignore the early stages of Chinese Yogacara thought represented in the Dilun Shi and the Shelun Shi. In ‘Zhiyi’s (538597) Reception, Interpretation, and Criticism of Dilun- and ShelunThoughts’, Hans Kantor used the texts of Huiyuan (523-592) plus Dunhuang manuscripts to reconstruct the history and doctrines of early Chinese Yogacara schools. He also stressed the role played by these early Yogacara commentators in the shaping of Zhiyi’s Tiantai philosophy. The inter­ action between Yogacara and Tiantai was clearly exposed. Nabuyoshi Yamabe drew our atten­ tion to another interaction between Yogacara and the indigenous Bud­ dhist Schools, namely Xuanzang s Participants o f the conference Yogacara Buddhism tn Leiden Faxiang School and Northern Chan. In ‘Yogacara Influence on the North­ by tracing two contrasting Yogacara Schmithausen’s paper can be seen as ern School of Chan Buddhism , Yam­ agendas: (1) critical phenomenology one of the most significant responses abe subverted the stereotype of com­ of consciousness and (2) mystic un­ to the dispute initiated by Alex Waymon understanding that Xuanzang s derstanding of consciousness. In man in the 1970s and espoused by Yogacara Buddhism had little influ­ drawing on the ‘unmediated experi­ many scholars since, including Dan ence on the later indigenous Buddhist ence’, which is ineffable, Yogacara has Lusthaus, who strongly challenged a Schools. By carefully analysing the to face the questions: How is one to non-idealist interpretation. Yuanmmg lun and the Zhengzong lun, engage in the world of language? Instead of reacting to Schmit­ Yamabe concluded that there is a What is the function oflanguage? For hausen’s criticism, Dan Lusthaus strong textual and doctrinal link be­ turned to the hermeneutic issue. In tween Yogacara and the Northern ‘Notes on the Soteric Hermeneutics Chan. of Asanga: Language, Samskaras, and Huimin Bhikkhu shed light on Appropriation’, Lusthaus examined modern Chinese Yogacara scholar­ Asanga’s Abhidharmasamuccaya and ForFaramartha ship. He introduced us to an interpre­ the Mahayanasamgraha respectively, tation of Yogacara thought from Yinattempting to answer questions such shun, the most prominent monkas ‘What are the cognitive conditions scholar in Taiwan. In Huimin’s ‘Praat work in a hermeneutic act?’ and titya-samutpada and Pratïtya-samut‘What happens when one reads or panna Dharma-laksasa: The Essence of as a skilful hears Buddhavacana?’ Using textual Yogacara thought from the viewpoint analysis, Lusthaus pointed out that of Venerable Yinshun’, the different ‘the teachings enter one’s own con­ arbitrary means positions adopted by Asanga and Vasciousness from outside, through the subandhu can be explained by look­ medium of language’. That is, a prac­ ing into their different interpreta­ titioner hears the teaching which to negate tions of‘causation’ and ‘the character­ flows from the Purest Dharmaistics of causally arisen phenomena. Dhatu (i.e., Purest Cognitive Field) Lastly, in ‘Yogacara and Abhidharcorrectly. As expected, a sort of antima in China’, Charles Willemen pro­ idealist stance is clearly demonstra­ vided a brief, historical picture of the ble in Lusthaus’ hermeneutics. Sarvastivada and the Sautrantika AbIn ‘Language and Consciousness in hidharmas as precedents to the rise of the Samdhinirmocana Sütra’, Chenthe Yogacara school. He summarized kuo Lin elaborated on a Yogacara a quite complicated historical context Paramartha, who was characterized philosophy of language. The main involving many figures and doctrines by Keenan as more religious and mys­ question for Lin was to clarify the in India, Central Asia, and China. tic, language is employed as a skilful ontological status of the referent but arbitrary means to negate all Conclusions ideas and all words. In reponse to After two days of in-depth discus­ Keenan’s presentation, Tilmann Vet­ sion, most participants agreed that ter remarked that the ‘unmediated this was a truly pioneering seminar experience’, for example, of animals, on the study of Yogacara Buddhism. should be differentiated from the In general, this symposium was Buddhist mystic ‘unmediated experi­ fruitful and promising. It was fruit­ ence’, which is always mediated di­ ful because it contributed scholar­ alectically. ship of a high standard to the study Pro/essor Chen-kuo Lin of Yogacara Buddhism. It was Chinese Buddhism (convenor o f the conference ] promising because a new land was In Chinese Buddhism in general, discovered. However, more effort including Yogacara, the most influ­ (nimitta) by looking into the Con­ needs to be made. As Professor Kawa­ ential yet controversial figure is Para­ sciousness and Three-Nature Theo­ mura proposed, a follow-up confer­ martha. Following the interpretive ries. Using SNS and the Viniscayaence on the same subject will take context in modern scholarship, in samgrahanl of Yogacarabhümi as place at the University of Calgary, ‘The Yogacara Doctrine of Buddhathe textual sources, Lin concluded Canada, in two years’ time. ■ Nature: Paramartha vs. Fa-hsiang that nimitta is the perceived object School’, Wing-cheuk Chan provided a that occurs as the effect of psychonew interpretation, and argued that linguistic sediments. Paramartha’s thought should be sep­ The problem oflanguage also drew arated from the Awakening ofFaith and John Keenan’s attention. In his Professor Chen-kuo Lin tathagatagarbha thought. On the basis lengthy paper, ‘Critical and Mystic was the European Chair o f Chinese Studies of the Fo-hsing lun, which is regarded Yogacara Philosophy: Paramartha on until I August 2000 at the HAS, Leiden. as Paramartha’s work, Chan also ar­ language’, Keenan provided a system­ E-mail: cklin@nccu.edu.tw gued that neither Buddha-nature nor atic account of Yogacara philosophy

Yogacara Buddhism in China On 8-9 June zooo, the symposium on ‘Yogaclra Buddhism in China’ was held at the International Institute for Asian Stud­ ies at Leiden University. Convened by Chen-kuo Lin, this sym­ posium gathered together scholars and Buddhologists from Taiwan, Japan, America, Canada, Germany, Belgium, and the Netherlands to explore the literatures and doctrines of Yogacara Buddhism in China from its inception in the fifth century to its modern revival in the twentieth century. By CHE N- KUO LIN

he theme of the symposium, not in­ appropriately, was a triple one, the first one of which was to study the Yogacara texts translated and collected in the Chinese Tripitaka. Except for a few texts still extant in Sanskrit, most Yogacara literature is preserved in Chinese and Tibetan translations, such as Samihinirmocana Sütra, Yqgacarabhümi, and Asanga’s Mahayanasamgraha, to name but a few. Despite their availability, Chi­ nese textual sources are often ignored by scholars when Tibetan transla­ tions are available for reconstruction and exegesis. Calling attention to the textual value of Chinese sources was one of purposes of this symposium. The second thematic focus was on the development of Yogacara Buddhism in China from its earliest stage (Dilun Masters and Shelun Masters), the ‘Old&#39; Yogacara School founded by Para­ martha (499-569), up to the ‘New&#39; Yogacara School founded by Xuanzang (602-664) and Kuiji (632-682). The revival of Yogacara Studies in the Ming dynasty and early decades of the Republican era should also not be overlooked. The third and most inter­ esting focus of the theme was the in­ terchange between Yogacara and other Chinese indigenous Buddhist schools, such as Tian-tai, Hua-yan, Chan, and Pure Land.

Pro/essor Kawamura (Calgary) a student can realize the meaning of vijnapti-matratd (information only), which is construed by Kawamura as a kind of mentalism. In Kawamura s interpretation, Yogacara is concerned with the ‘meaningful world’, but not with the ‘ontological world’. What counts are the mental factors in the processing of information. The ontological question of whether ‘external objects do not exist’ or ‘the world is nothing but an idea’ does not bother Yogacara. However, as we will see later, the ontological ques­ tion may not easily be dismissed. Unhappy about some scholars, ‘mainly from the Anglo-Saxon cul­ tural sphere’, having challenged the Yogacara ‘idealist’ ontology of‘noth­ ing but cognition’ (vijnapti-matrata), in his paper entitled ‘On the Prob­ lem of the External world in Chery wei shih lun’, Lambert Schmithausen vigorously argued that ‘the existence of “extra-mental” material (or other) entities’ is rejected not only as ob-

Diversity o f approaches Given these guidelines, the topics of papers presented at the sympo­ sium reflected a great diversity of problematic and methodological ap­ proaches. In ‘Three Natures in the Mahayanasamgraha , Leslie S. Kawamura pointed out the structural sim­ ilarity between Asanga’s Mahaya­ nasamgraha and Vasubandhu’s Tritnsika. Both regard the Three-Nature Theory as the modus operandi by which

Professor Schmithausen (Hamburg). jects of cognition but also as such without any qualification. Although he might not have the final word,

language is employed but