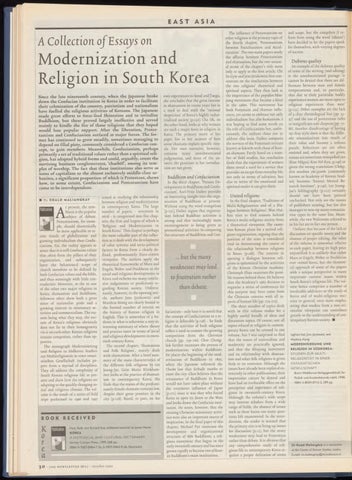 A Collection o f Essays on

Modernization and Religion in South Korea Since the late nineteenth century, when the Japanese broke down the Confixcian institution in Korea in order to facilitate their colonization o f the country, patriotism and nationalism have fuelled the religious activities o f Koreans. The Japanese made great efforts to force-feed Shintoism and to revitalize Buddhism, but these proved largely ineffective and served mainly to kindle the fire o f those religions that they hoped would lose popular support. After the liberation, Protes­ tantism and Confucianism surfaced as major forces. The for­ mer has continued to grow steadily, sometimes managing to depend on filial piety, commonly considered a Confucian con­ cept, to gain members. Meanwhile, Confucianism, perhaps primarily a set o f traditional values rather than a spiritual reli­ gion, has adopted hybrid forms and could, arguably, count the surviving business conglomerates, ‘chaeböl’, among its tem­ ples o f worship. The fact that these institutions also serve as icons o f capitalism to the almost exclusively middle-class ur­ banites, a significant proportion o f which is Protestant, shows how, to some extent, Confucianism and Protestantism have come to be interdependent. By ROALD MALI ANGKAY

* t present, the symZ \ biosis is the popular L Asubject of debate. Protestantism, for exam­ ple, should theoretically be more applicable to re­ cent trends of globalization and growing individualism than Confu­ cianism. Yet, the reality appears to attest that it is still Confucian values that often form the pillars of their organization, and subsequently leave the behavioural scope of church members to be defined by both Confucian values and the bible, and thus seemingly with little con­ tradiction. Moreover, as the in case of the other two major religions in Korea, shamanism and Buddhism, followers often show both a great sense of nationalist pride and a growing interest in missionary ac­ tivities and commercialism. The rea­ sons being what they may, the suc­ cess of Korea’s religions obviously does not lie in their homogeneity vis-a-vis each other. Korean religions remain composites, rather than op­ posites. The monograph Modernisierung und Religion in Südkorea: Studiën zur Multireligiositat in einer ostasiatischen Gesellschaft includes pa­ pers from a myriad of disciplines. They all address the complexity of South Korean religious life at pre­ sent and show how the religions are adapting to the quickly changing so­ cial and religious climate. The vol­ ume is the result of a series of field trips performed in 1996 and 1997

aimed at studying the relationship between religion and modernization in contemporary Korea. The large number of papers - seventeen in total - is categorized into five chap­ ters, the first and largest of which is ‘Religion and Modernization in South Korea’. This chapter is perhaps the most valuable part of the collec­ tion as it deals with the development of value systems and socio-political factors in Korea from a clearly de­ fined, predominantly Euro-centric viewpoint. The authors apply the theoretical frameworks of Marx and Engels, Weber and Durkheim to the social and religious developments in Korea and eschews too many conclu­ sive judgements or predictions re­ garding Korean society. Unfortu­ nately, however, in the opening arti­ cle, authors Jens Jetzkowitz and Matthias König are clearly bound to the limited number of sources on the history of Korean religion in English. This is somewhat of a let­ down in what is otherwise a very in­ teresting summary of where theory and practice meet in terms of social and religious developments in twen­ tieth-century Korea. The second chapter, ‘Shamanism and Folk Religion’, mainly deals with shamanism. After a brief sum­ mary of the main characteristics of the different folk religions by Lee Joung-Jae, Gritt Maria Klinkhammer looks at the practice of shaman­ ism in contemporary Korea. She finds that the status of the predomi­ nantly female shamans remains low, despite their great presence in the city (p.128). Based, in part, on her

own experiences in Seoul and Taegu, she concludes that the great interest in shamanism in recent years lies in a need to deal with the ‘rational skepticism’ of Korea’s highly indus­ trialized society (p.i3o). Cha Ok, on the other hand, looks at why women are such a major force in religion in Korea. The primary merit of her paper lies in her account of how some shamans explain specific ritu­ als. Her own narrative, however, contains many unsubstantiated judgements, and most of the an­ swers she promises in her introduc­ tion are not given.

Buddhism and Confucianism In the third chapter, ‘Present De­ velopments in Buddhism and Confu­ cianism’, Karl-Fritz Daiber provides an interesting insight into the orga­ nization of Buddhism at present. Without using the word evangelism (p.152), Daiber argues that organiza­ tion behind Buddhist activities is strong and that increasingly more encouragement is being given to promotional activities. In comparing the structure of Buddhism and Con-

... but the many weaknesses may lead to frustration rather than debate.

fucianism - only here it is noted that the concept of Confucianism as a re­ ligion is debatable (p.158) - he finds that the activities of both religions reflect a need to counter the growing competition from the Christian church (pp. 159-160). Choe ChongSok further examines the process of modernization within Buddhism. He places the beginning of the mod­ ernization of Buddhism in 1895, when the Japanese reformed the Cfioson law that forbade monks to enter the city. Choe believes that the renaissance of Buddhism in Korea would not have taken place without the enormous influence of Japan (p.171) since it was they who forced Korea to open its doors to the West and broke down the Confucian insti­ tution. He notes, however, that the ensuing Christian missionary activi­ ties were also an important source of inspiration. In the final paper of this chapter, Michael Pye examines the development and organizational structure of Won Buddhism, a reli­ gious movement that began in the early twentieth century and has since grown rapidly to become one of Kore­ an Buddhism’s main institutions.

The influence of Protestantism on other religions is the primary topic of the fourth chapter, ‘Protestantism between Enculturation and Accul­ turation’. The two main papers study the affinity between Protestantism and shamanism, but the two unusu­ al terms of the chapter’s title seem only to apply to the first article. Chi In-Gyw and Jens Jetzkowitz first con­ centrate on the similarities between the two religions&#39; theoretical and spiritual aspects. They then look at the importance of the populist Minjung movement that became a force in the 1980s. This movement has both Protestant and shaman influ­ ences, yet seems to embrace not only individualism but also humanism. I was hoping to find some words on the role of Confucianism but, unfor­ tunately, the authors chose not to address this issue. Daiber compares the services of the Protestant retreats known as kidowon with those ofKorean shamans. Partly based on a num­ ber of field studies, his conclusion finds that the experiences of women there reveal a need for a service that provides an escape from everyday life, not only in terms of salvation, but also in terms of the emotional and spiritual outlet it can give them.

and scope, but the compilers (I re­ frain from using the word ‘editors’) have decided to let the papers speak for themselves, with varying degrees of success.

An example of the dubious quality of some of the writing (and editing) is the unsubstantiated passage ‘it cannot be denied that there are dif­ ferences between man and female temperaments and, in particular, that due to their particular bodily experiences women are more open to religious experiences than men’ (p.133). Other examples are the lack of a clear chronological line (pp. 5157) and the use of pretentious titles to insignificant sub-chapters (pp. 7786). Another disadvantage of having no clear style sheet is that the differ­ ent romanizations lose much of their value and become a tedious puzzle. References are too often omitted and, when they are given, names are sometimes misspelled (see [Kim Yölgyu] Kim Vel-Kyu, p.146) or given the wrong translation (Chongshin munhwa yöriguwön [commonly known as Academy of Korean Stud­ ies] becomes ‘Korean Mental Re­ search Institute’, p.146). Lee JoungJae’s bibliography (p.X22) certainly should not have been printed United religions In the final chapter, ‘Traditions of unchecked. Not only are the names of publishers missing, but Lee also Multi-Religiousness and of a Dia­ manages to mix-up many romanizalogue between Religions’, Woo Haition types in the same line. Mean­ Ran tries to find reasons behind while, the two Walravens referred to Korea’s multi-religious society from in his list are in fact one person. a theoretical viewpoint. She exam­ I believe that because of the lack of ines Korean plans for a united reli­ discussion on specific issues and the gions organization, arguing that the absence of proper editing, the value position of the state is considered of the volume is somewhat relative vital in determining the course of to each paper, leaving its high price the relationship between religions unjustified. It is unlikely that either in Korea (p.268). The interest in Marx or Engels, Weber or Durkheim opening a dialogue between reli­ ever visited Korea, but the theoreti­ gions is epitomized by the activities cal approach of some of the papers of the Korean Christian Academy. adds a unique perspective to many Christoph Elsas examines the possi­ important current issues within ble reasons behind these. He believes South Korea’s religious life. The vol­ that the Academy’s 1965 decision to ume hence comprises a number of organize a series of conferences for invaluable additions to the study of this purpose may have come from Korea and of multi-religious soci­ the Christian concern with all as­ eties in general, once more empha­ pects of human life (pp. 274-275J. sizing that studies from a non-oriThe sheer number of topics dealt with in this volume makes for a entalist viewpoint can contribute greatly to the understanding of con­ highly useful bundle of ideas and temporary Korean society. ■ discussion topics. Of course, not all topics related to religion in contem­ porary Korea can be covered in one Sigfried Keil, Jens Jetzkowitz and volume, but I was surprised to find Matthias König that the issues of nationalism and MODERNISIERUNG UND modernity are practically ignored, RELIGION IN SÜDKOREA: and that the Minjung movement STUDIËN ZUR MULTIand its relationship with shaman­ RELIGIOSITAT IN EINER ism and other folk religions is given OSTASIATISCHEN little or no attention. Although the GESELLSCHAFT. issues have already been explored ex­ Bonn:Weltforum Verlagsgesellshaft für tensively in other publications, their Politik und Auslandskunde mbH, 1998. importance cannot be denied and ISBN 3-8039-0715-2,299 pp. have had an irrefutable effect on the perception and experience of reli­ gions in twentieth-century Korea. Although the volume’s wide scope may interest scholars from a wide range of fields, the absence of issues such as these leaves too many ques­ tions left unanswered. In the intro­ duction, the reader is warned that the primary aim is to bring up issues for discussion (p.12), but the many weaknesses may lead to frustration rather than debate. It is obvious that Dr Roald M aliangkay is a researcher any comprehensive study of reli­ at the Centre o f Korean Studies, Leiden. gious life in contemporary Korea re­ E-mail: r.h.maliangkay@let.leldenuniv.nl quires a proper definition of terms