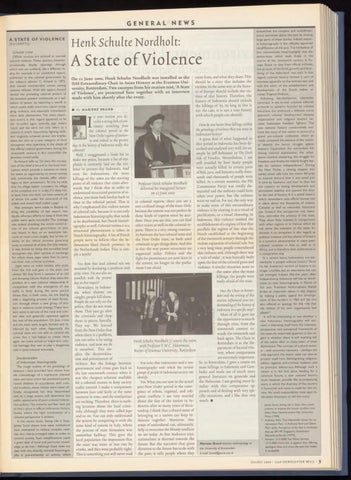 GENERAL A STATE OF V I O L E N C E (EXCERPTS): Colonial crime Official sources are inclined to conceal colonial violence. These sources, however, occasionally display openings through which one can suddenly see a different re­ ality. An example Is an unsolicited report, submitted to the colonial government by the tobacco planter C. Amand in 1872, that caused considerable unrest among colonial officials. W ith this report, Amand denied the prevailing colonial picture of the Javanese peasant community as a ‘pal­ ladium of peace&#39; by depicting a world in which cattle theft, extortion, opium smug­ gling, violence, and especially intimidation were daily phenomena. The most impor­ tant actors in this regard appeared to be the so-called jagos. Literally, jago means ‘cock’ and the term not only refers to a culture in which masculinity, fighting skills, and magically achieved power are empha­ sized, but also to a new category of local strongmen who, operating in the shade of the official colonial government during the nineteenth century, in fact controlled the Javanese countryside. As Amand tells us,‘On Java, the occupa­ tion of the thief is bound to the local insti­ tutions which provide a vocation to many, for some an opportunity to invest money, and, conversely, the thieves offer advan­ tages to their protectors.’ To this he adds that ‘no village leader considers his village to be complete, nor in order, if it does not, at least, have one thief, ore even several, all of whom are under the command of the oldest and wisest thief, called a jago&#39; Vain attempts were made in Batavia to bring the credibility of this report into doubt, whereas efforts to keep it from the public were quite successful. The message was indeed shocking: the entire construc­ tion of the colonial government on Java was based, in fact, on an extensive net­ work of rural crime, largely due to the in­ ability of the official Javanese governing body to control all of java. For this reason, it was forced to bring the so-called local strongmen into their service, in exchange for which these jagos were free to carry out their own criminal activities. Jagos were no noble bandits who stole from the rich and gave to the poor, and neither did they form a remnant of an old and decaying culture. Rather, they were the product of a new colonial relationship. A comparison with the emergence of the mafia in Sicily during the same period shows that, in both cases, we are dealing with a stagnating process of state forma­ tion through which a new group of bro­ kers in violence could emerge. These bro­ kers were in service of the rural and colo­ nial elite and generally operated against the rest of the population. On Java, crime and the state were largely formed and re­ inforced by each other. Apparently the colonial state was not able to control the crime that it had helped to create. Here again, we come across an important colo­ nial heritage that was to play a dangerous role in post-colonial Indonesia. Decolonization o f Indonesian historiography The rough outline of the genealogy of violence I have provided here shows how the concubinage of a repressive colonial state and local crime has produced poorly raised children. In accordance with colo­ nial tradition, these militias were never of­ ficially recognized, but they determined and, to a large extent, still determine the public appearance of post-colonial Indone­ sian politics.The violence and fear have yet to find a place in official Indonesian history books, where the rigid continuation of a colonial perspective Is evident. In his recent book, Seeing Like a State, James Scott shows how state institutions have attempted to reduce complex reali ties into clearly arranged ideas in order to control society. Such simplifications cause a great deal of local and particular knowl­ edge to be lost.1Although Scott does not deal with this directly, national historiogra­ phy is pre-eminently an activity which

A State of Violence

are striking. Therefore, there is noth­ ing Javanese about the local crim i­ nals, although they were called Ja^o and so on. You can only understand the system by comparing it w ith the same kind o f system in Italy, where the process o f state form ation was somewhat halfway. This gave the local population the impression that the state was more or less run by crooks, and they were probably rig ht. This is something you w ill never read

about the fate o f the nation in In ­ donesia after so many years o f dicta­ torship. I th in k that a shared sense o f belonging to a nation can keep In ­ donesia together. Moreover, this sense o f nationhood can, ultim ately, help to overcome the bloody conflicts we see today. As Ben Anderson says, nationalism is directed towards the future. But the narrative th at gives direction to the future has to do w ith the past; it tells people where they

17-3-2000. From this, it appears that offering apologies does n o t close the past, b ut makes it accessible.