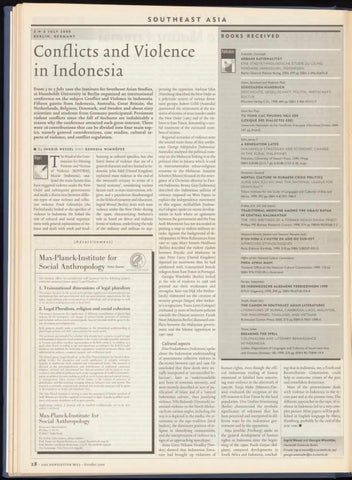 Conflicts and Violence in Indonesia From 3 to 5 July zooo the Institute for Southeast Asian Studies, at H um b oldt University in Berlin organized an international conference on the subject Conflict and Violence in Indonesia. Fifteen guests from Indonesia, Australia, Great Britain, the Netherlands, Belgium , Denmark, and Sweden and about sixty scientists and students from Germany participated. Persistent violent conflicts since the fall o f Soeharto are indubitably a reason why the conference attracted such great interest. There were z6 contributions that can be divided into four m ain top­ ics, nam ely general considerations, case studies, cultural as­ pects o f violence, and conflict regulation. ■ By I NGRI D WESSEL A N D GEORGI A WI MHÖFER

he Head of the Com­ mission for Missing Persons and Victims of Violence (KONTRAS), Munir (Indonesia), ana­ lysed the main factors that have triggered violence under the New Order and subsequent governments and made a distinction between differ­ ent types of state violence and collec­ tive violence. Freek Colombijn (the Netherlands) looked at the specifics of violence in Indonesia. He linked the role of cultural and social organiza­ tions with general explanations of vio­ lence and dealt with amok and head­

hunting as cultural specifics, but also listed forms of violence that are of a general character and not limited to In­ donesia. John Sidel (United Kingdom) explained mass violence at the end of the twentieth century in terms of a ‘moral economy’, considering various factors such as state intervention, reli­ gion, and a population disadvantaged in the fields of economy and education. Ingrid Wessel (Berlin) dealt with state violence under the New Order during the 1990s, characterizing Soeharto&#39;s rule as based on direct and indirect forms of violence, underlining the rule of the military and militias in sup-

1. Transnational dim ensions o f legal pluralism The project focuses on the social and economic significance of transnational and international law and governmental and non-governmental organisations for the rights, legal relations and social practices of individuals and social groups as well as for decision making processes at local level.

2. Legal Pluralism, religion and social cohesion The project focuses on the significance of different constellations of plural legal systems for the emergence and change of societal bonds, processes of exclusion and inclusion and access to common goods. Special attention shall be given to the role of religion and religious law. Both projects should make a contribution to the theoretical understanding of plural legal systems and their consequences for social action. The positions are intended for scholars who already have a proven record in legal anthropological research. Each position is for 3 years initially (possible extension to 5 years) and offers excellent opportunities to do field research. In addition to a good salary (fixed according to age and experience according to the BAT/O-scale) resources are available for field trips, equipment, research assistants, library and administrative services, computer support, and conference travel. The project group “Legal Pluralism&quot; at the Max-Planck Institute for Social Anthro­ pology studies the emergence and social significance of complex normative systems at small-scale local, national and transnational levels. The research is directed at the interdependences and hybridization of traditional customary, religious, national and international law. Special attention will be given to socio­ economic and political problems such as the management of conflicts and partici­ pation in political decision making as well as social (in)security and natural resour­ ce management. These themes will be studies in the context of processes of globalisation and the resulting changing relations between state and society. The research is primarily comparatively oriented, but particular attention will be given to developments in South and Southeast Asia. The Max Planck Institute is striving to raise the proportion of female members of staff. Women are therefore explicitly encouraged to apply. Equally qualified candi­ dates with severe disabilities will be given priority. Applications (which, if desired, will be handled confidentially) are to be sent within 3 weeks to:

pressing the opposrion. Andreas Ufen (Hamburg) described the New Order as a polycratic system of various domi­ nant groups. Robert Cribb (Australia) questioned the seriousness of the sta­ tistics of victims of mass murder under the New Order (1965) and of the vio­ lence in East Timor, demanding a care­ ful treatment of the estimated num­ bers of victims. Regional scenarios of violence were the second main focus of this confer­ ence. George Aditjondro (Indonesia/ Australia) analysed the political econ­ omy on the Moluccas linking it to the political elite in Jakarta which is said to instrumentalize ethno-religious tensions in the Moluccas. Susanne Schröter (Mainz) focused on the emer­ gence of a Christian identity in East­ ern Indonesia. Benny Giay (Indonesia) described the Indonesian politics of violence imposed on West Papua to explain the independence movement in this region. Ariffadillah (Indonesia/Cologne) spoke on recent develop­ ments in Aceh where an agreement between the government and the Free Aceh Movement has not succeeded in putting a stop to violent military at­ tacks. Against the background of de­ velopments in West Kalimantan from 1967 to 1999, Mary Somers Heidhues (Berlin) described the violent clashes between Dayaks and Madurese in 1997. Peter Carey (United Kingdom) reported on interviews that he had conducted with traumatized female refugees from East Timor in Portugal. Georgia Wimhöfer (Berlin) looked at the role o f students in 1998 and pointed out their weaknesses and strengths. Kees van Dijk (the Nether­ lands) elaborated on the creation of security groups (Satgas) after Soeharto’s resignation. Yusiu Liem (Cologne) evaluated 33 years of Soeharto policies towards the Chinese minority. Farish Noor (Malaysia/Berlin) discussed con­ flicts between the Malaysian govern­ ment and the Islamic opposition in 1997-1999.

C u ltural aspects Dias Pradadimara (Indonesia) spoke about the Indonesian understanding of spontaneous collective violence in the streets between 1997 and 1999. He concluded that these deeds were ini­ tially interpreted as ‘uncontrolled be­ haviour’, later as ‘understandable acts’ born o f economic necessity, and were recently described as ‘acts of pu­ rification’ of Islam and of a ‘tainted Indonesian culture’, thus justifying violence. Nils Bubandt (Denmark) ex­ amined violence in the N orth Moluc­ cas from various angles, including the way it is depicted in the media, the re­ naissance or the ja^o tradition (local leaders), the dominant position of re­ ligion in identifying communities, and the interpretation of violence as a sign of an approaching apocalypse. Anna Greta Nilsson Hoadley (Swe­ den) showed that Indonesian litera­ ture had brought up violations of

hum an rights, even though the offi­ cial Indonesian reading o f history ommitted or falsified facts concern­ ing state violence in the aftermath of 1965/66. Tanja Hohe (Miinster/Darwin) evaluated the reception of the UN mission to East Timor by the local population. Urte Undine Froemming (Berlin) characterized the symbolic significance of volcanoes that has been perceived and interpreted in dif­ ferent ways by the Indonesian gov­ ernment and by the opposition. Anja Jetschke (Freiburg) spoke on the general development of human rights in Indonesia since the begin­ ning of the 1990s. Paulo Gorjao (Bel­ gium) compared developments in South Africa and Indonesia, conclud­

ing that in Indonesia, too, a Truth and Reconciliation Commission could help to overcome crimes of the past and consolidate democracy. Most of the presentations dealt with violence in Indonesia in the re­ cent past and at the present time. The different approaches to the topic of vi­ olence in Indonesia led to a very com­ plex picture. Most papers will be pub­ lished in English language by Abera, Hamburg, probably by the end of the year 2000. ■