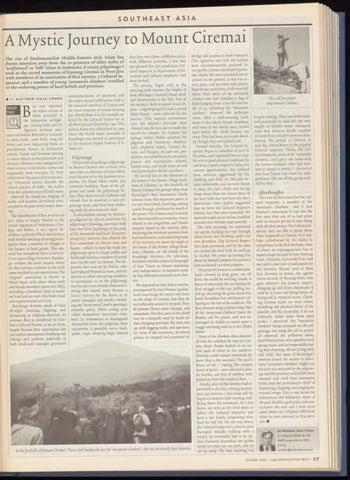 may represent the oldest variant of Islam practised in the Indonesian archipel­ ago, mixing Sufic and in­ digenous Javanese prac­ tices and beliefs. Referred to variously as santn biraht, santn brahi, wong dul birhai, and santri dulguyermg biraht, its practitioners feature in nineteenth century Dutch and Javanese writing as exotic objects of entertainment and derision. Devotees were castigated for their variance with Islamic norms and supposedly loose morality; P.J. Veth called them ‘the scum of Javanese soci­ ety.’ Historical sources describe the central practice of dzikir - the Arabic term for remembrance of God s name - observed by mixed-sex singing of Arabic and Javanese devotional texts, coupled in the past with ecstatic dancing. The distribution of Brai societies in Java today is largely limited to the coastal regencies of Indramayu, Cirebon, and Brebes. A 1921 report de­ scribes a network of Brai associations, with weekly meetings drawing partic­ ipants from a number of villages to the houses of head gurus. This net­ work has attrophied; there is current­ ly no supra-village structure. Bayalan­ gu remains the most famous centre for Brai activity; a schism in the early 1990s resulted in two associations. The ‘original’ association is known as Nurul Iman, with about thirty male and female members (most over fifty), including a hereditary kiyai as nomi­ nal head and an imam who leads ritual and organizational activities. Bayalangu devotees speak of their all-night chanting, clapping, and drumming as religious devotion. In contrast, Brai is considered by Cirebon’s Cultural Section as an art form, largely because Brai associations use percussion instruments [kendhang and terbang) and perform publically at both small-scale unjungan (graveyard

At the foothills of Mount Ciremai.

that they were from a different class, with different outlooks. I was also not pleased that the subdistrict Cul­ tural Inspector (a Department of Ed­ ucation and Culture employee) had been invited. The journey began early in the morning with incense, the display of food offerings, a hurried ritual meal, and incantations at the bale. Two of the society’s cloth-wrapped ritual ob­ jects - a signal gong (beri) and a curved blade (bayan) - were collected for the journey. (The musical instruments were left behind.) Everyone then climbed into the bus and we made the sacred-site rounds: the Cipanas hot springs (where Dakila splashed the pilgrims and ‘mountain climbers’ with sulphuric water), Trusmi, As­ tana, and Plangon. At each site, per­ mission was asked from the ancestors, prayers and incantations uttered, hymns sung, and small sums of cash were presented to shrine caretakers. We arrived late in the afternoon at the house of the former village head­ man of Cibuntu, in the foothills of Mount Ciremai. No groups other than Bayalangu’s Brai association climbs Ciremai from this departure point. It is a very hard climb, involving cutting a path through rainforest for much of the ascent. The Cibuntu start is clearly not determined by convenience, but is related to the megalithic and Hindu remains found in the vicinity. After obtaining the necessary permits from local authorities, and examining some of the remains, we spent the night at the house of the former village head­ man, Cibuntu, an old friend of the Bayalangu devotees. On television, President Habibie exhorted the people of East Timor to choose autonomy over independence. A slapstick come­ dy that followed attracted more view­ ers. We departed on foot before sunrise, accompanied by two Cibuntu guides. Local men forage for rattan and hunt on the slope of Ciremai, but they do not ordinarily ascend to its peak. They do possess ‘forest sense’ though, and compasses. The first part of the climb was on a footpath used by locals for their foraging activities. We then met up with logging roads, and spectacu­ lar views of the mountain. At several points, we stopped and presented of-