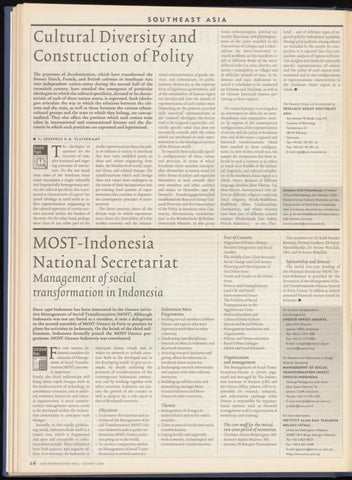 Cultural Diversity and Construction of Polity The processes o f decolonization, which have transformed the former Dutch, French, and British colonies in Southeast Asia into independent nation-states during the second half o f the twentieth century, have entailed the emergence o f particular ideologies in which the cultural specificity, deemed to be charac­ teristic o f each o f these nation states, is expressed. Such ideolo­ gies articulate the way in which the relations between the citi­ zens and the state, as well as those between the various ethniccultural groups and the state to which they belong, are concep­ tualized. They also affect the position which each nation state takes in international and transnational forums and the dis­ course in which such positions are expressed and legitimized. ■ By J OS E P HU S D. M. PLATENKAMP

he ideologies in question are the outcome of com­ plex historical and ongo­ ing processes of interac­ tion. On the one hand, since none of the Southeast Asian states encompass a single culturally and linguistically homogeneous soci­ ety, the cultural specificity that is pre­ sented as characteristic of a given ‘na­ tional’ ideology in itself tends to re­ flect representations originating in the cultural repertoire of various soci­ eties situated within the borders of the state. On the other hand, perhaps more than in any other part of the

world, representations about the poli­ ty in relation to society in Southeast Asia have been modelled partly on ideas and values originating from India, the Muslim-Arab world, impe­ rial China, and colonial Europe. The transformations which such foreign ideas and values have undergone in the course of their incorporation into pre-existing local systems of repre­ sentations also continue to character­ ize contemporary processes of incor­ poration. The latter concerns above all the diverse ways in which representa­ tions about the desirability of a free market economy and the interna­

tional communication of goods, ser­ vices, and information, of parlia­ mentary democracy as the supreme form of legitimate government, and of the inviolability of human rights are incorporated into the system of representations of each nation state. Depending on the position accorded such ‘universal’ representations in the ‘national’ ideologies, the former tend to be assigned a particular, cul­ turally specific value that does not necessarily coincide with the values which are attributed to such repre­ sentations in the ideological systems of the Western world. To research these culturally specif­ ic configurations of ideas, values, and practices, in terms of which Southeast Asian societies conceptu­ alize themselves as nation states (or other forms of polity) and represent themselves as such towards their own members and other societies and states, in December 19951 the Deutsche Forschungsgemeinschaft established the Research Group ‘Cul­ tural Diversity and the Construction of the Polity in Southeast Asia: Con­ tinuity, discontinuity, transforma­ tion’ at the Westfaelische WilhelmsUniversitat Münster. In this group

MOST-Indonesia National Secretariat Management o f social transform ation in Indonesia Since 1pp6 Indonesia has been interested in the Unesco initia­ tive Management o f Social Transformation (MOST). Although Indonesia was not yet listed as a member, it sent a delegation to the second assembly o f MOST-Unesco in Paris to present its plans for activities in Indonesia. On the brink o f the third mil­ lennium, Indonesia formally joined the MOST-Unesco pro­ gramme. MOST-Unesco Indonesia was constituted. or two reasons In­ donesia considers the existence of Manage­ ment of Social Transfor­ mation (MOST) extreme­ ly important. Firstly, the third millennium will bring about rapid changes both in the modernization of technology, in community structure, and in politi­ cal, economic, historical, and cultur­ al organizations. A social transfor­ mation management system needs to be developed within the Indone­ sian community to anticipate such changes. Secondly, in this rapidly globaliz­ ing world, Indonesia finds itself in a transit area, which is fragmented and open and susceptible to influ­ ences from outside. These influences have both positive and negative ef­ fects. It is necessary for Indonesia to

anticipate future trends and to widen its network to include coun­ tries both in the developed and in the developing world. To give an ex­ ample, by deeply analysing the processes of transformation of the contemporary Indonesian commu­ nity and by working together with other countries, Indonesia can sus­ tain the growth of the country as well as prepare for a role equal to that of developed countries.

Themes Objectives r. To promote the existence and ac­ tivities of the Management of So­ cial Transformation (MOST)-Unesco Indonesia and to gather in­ formation MOST-Unesco activi­ ties going on in the world. 2. To conduct comparative studies on Management of Social Trans­ formation in several countries.

1. Management of changes in multicultural and multi-ethnic societies; 2. Cities as areas of accelerated social transformation; 3. Coping locally and regionally with economic, technological and environmental transformations.

social anthropologists, political sci­ entists, historians, and philologists some of the latter attached to the Universities of Cologne and Leiden address the above-mentioned re­ search problem, as this manifests it­ self at different levels of the socio­ political order (i.e. state, district, sul­ tanate / principality, or village) and in different periods of time, in In­ donesia and Laos. Additional re­ search is scheduled to be conducted on Vietnam and Thailand, as well as on Chinese historical sources per­ taining to these regions.

land) - and of different types of re­ gional polities (sultanates, rajadoms, Muang-principalities, among others) are included in the sample for com­ parison. It is expected that this com­ parative analysis of regions will pro­ vide insights into both the culturally specific representations of society and the polity of each nation-state examined and in the configurations of representations characteristic of the Southeast Asian region as a whole. ■

The Research Group can be contacted at:

The research project is envisaged as an instrument to allow for an inter­ disciplinary and comparative analy­ sis by regions of the contemporary configurations of the representations of society and the polity in Southeast Asia, and of the (supra-) regional and historical transformations which have resulted in these configura­ tions. In view of this overall aim, the sample for comparison has been se­ lected in such a manner as to reflect as much as is feasible of the histori­ cal, linguistic, and cultural complex­ ity of the Southeast Asian region as a whole. Hence speakers of different language families (Sino-Tibetan, Tai, Mon-Khmer, Austronesian) who ad­ here to different religious traditions (local religions, Hindu-Buddhism, Buddhism, Islam, Confucianism, Christianity), and whose societies have been part of different colonial empires (Netherlands East Indies, French Indochina) - or not (Thai­

O rganization ana management The Management of Social Transformation-Unesco is jointly orga­ nized and managed by The Indone­ sian Institute of Sciences (LIPI) and the Unesco Office, Jakarta. LIPI is re­ sponsible for research, symposia, and information exchange while Unesco is responsible for organiza­ tional matters, such as financial management and/or organization of workshops and training.

C onstruction of the Polity in Southeast Asia: Continuity, discontinuity, transform a­ tion at the the Westfalische Wilhelms-Universitat Munster, Germany. E-mail: platenk@uni-muenster.de

Sponsorship and Sources The initial two-year funding of the National Secretariat MOST Unesco-Indonesia is provided by the Secretariat of the Management of So­ cial Transformation-Unesco, located in Paris, France. In addition, several potential financial sources would be welcome. ■ For General Correspondence and Management: