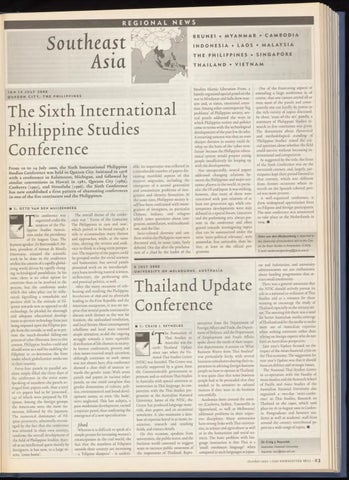 he conference was organized under the auspices of the Phi, \ lippine Studies Associa■ta-;.. I tion under the presidency of Dr Isagani Cruz. The keynote speaker, Dr Bienvenido F. Nebres, president of Ateneo de Manila University, situated the scientific work to be done in the conference within the context of a rapidly global­ izing world driven by rapidly chang­ ing technological possibilities. In his view, there is no other option for countries than to be involved in the process, but the conditions under which this takes place can be influ­ enced. Signalling a remarkable and positive shift in the attitude of Fil­ ipinos towards new as opposed to old technology, he pleaded for thorough and adequate educational develop­ ment to prevent technology from just being imposed upon the Filipino peo­ ple from the outside, as well as to pre­ vent the much-dreaded falling-out process of cyber illiterates. Seen in this context, Philippine Studies could and should serve as a tool for enabling the Filipinos to co-determine the form under which globalization works out in their country. Forty-four panels in parallel ses­ sions amply filled the three days of the conference in the strict sense. Speaking of numbers: the panels av­ eraged four papers each, thus a total of 171 papers had to be ‘processed’, 147 of which were prepared by Fil­ ipinos. Among the foreign groups, the Americans were the most nu­ merous, followed by the Japanese. The numerical dominance of Fil­ ipino presenters, admittedly encour­ aged by the fact that the conference was situated in their own country, confirms the overall development of the field of Philippine Studies. Start­ ed as an intellectual quest mainly by foreigners, it has now, to a large ex­ tent, ‘come home’.

From i o to 14 July zooo, the Sixth International Philippine Studies Conference was held in Quezon City. Initiated in 1978 with a conference in Kalamazoo, Michigan, and followed by similar conventions in Hawaii in 1981, Quezon City (1989), Canberra (1992), and Honolulu (1996 ) , the Sixth Conference has now established a firm pattern o f alternating conferences in one o f the five continents and the Philippines.

able. Its importance was reflected in a considerable number of papers dis­ cussing manifold aspects of this massive migration, including the emergence of a second generation and concomitant problems of inte­ gration and identity formation. At the same time, Philippine society it­ self has been confronted with immi­ gration of foreigners, in particular Chinese, Indians, and refugees which raises questions about inte­ gration, assimilation, multiculturalism, and the like. Socio-cultural diversity and con­ flicts within the Philippine state were discussed and, in some cases, hotly debated. One day after the proclama­ tion of a jihad by the leader of the

Muslim Islamic Liberation Front, a hastily organized special panel on the war in Mindanao and Sulu drew mas­ sive and, at times, emotional atten­ tion. Among other contemporary ‘big problems’ of Philippine society, sev­ eral panels addressed the ways in which Philippine society and politics come to terms with the technological developments of the past few decades. A recurring concern was that an even sharper division in society could de­ velop on the basis of the ‘cyber-revo­ lution’ because the Philippine educa­ tional system would prepare young people insufficiently for keeping up with the developments. Not unexpectedly, several papers addressed changing relations be­ tween the Philippines and major eco­ nomic players in the world, in partic­ ular the US and Japan. It was striking, however, that most of them were concerned with past relations of at least one generation ago, while con­ temporary developments were only debated in a special forum. Literature and the performing arts, always pre­ sent in the conference and often geared towards investigating topics that can be summarized under the term ‘socio-political relevance’, were somewhat less noticeable than be­ fore, at least in the official pro­ gramme.

The overall theme of the confer­ ence was ‘ Turns of the Centuries: The Philippines in 1900 and 2000’, which proved to be broad enough a title to accommodate many themes and approaches, while, at the same time, alerting the writers and audi­ ence to think in a long-term perspec­ tive. The majority of the papers could be grouped under the social sciences and humanities, but several panels presented work on an interdiscipli­ 6 JULY 2 0 0 0 UNI VERSI TY OF MELBOURNE, nary basis involving natural sciences, architecture, the performing arts, and practical politics, as well. After the many occasions of cele­ brating and studying the Philippine Revolution of 1896 and its aftermath leading to the First Republic and the American occupation, it was no sur­ prise that several panels continued to discuss such themes as the war for freedom, the unfinished revolution, and local heroes. More contemporary By CRAIG J. REYNOLDS rebellions and local wars received he Promotion of ample attention; as did the ongoing Thai Studies in struggle towards a more equitable Australia’ was the distribution of life chances in society. sixth Thailand Update In former conferences, poverty and since 1991 when the Na­ class issues received much attention; tional Thai Studies Centre although attention to such issues (NTSC) was founded. The Centre was was not absent here, this conference initially supported by a grant from showed a clear shift of interest to­ the Commonwealth government to wards the gender issue. With seven promote and co-ordinate Thai Studies panels and papers in various other in Australia with special attention to panels, no one could complain that instruction in Thai language. In con­ gender dimensions of culture, poli­ junction with the Thai Studies pro­ tics, environmental and broad devel­ gramme at the Australian National opment issues, or even ‘the body’, University, home of the NTSC, the were neglected. This last subject, a Centre has produced language mate­ post-modernist development, earned rials, data papers, and an occasional a separate panel, thus confirming the newsletter. It also maintains a data­ emergence of a new specialization. base of expertise keyed in as name, in­ stitution, research and teaching Jihad fields, and contact details. Whereas it is difficult to speak of a On this occasion, speakers from simple process for increasing women’s universities, the public sector, and the emancipation in the real world, the business world convened to suggest fact that the numbers of Filipinos ways to increase public awareness of outside their country are increasing the importance of Thailand. Repre- a ‘Filipino diaspora’ - is undeni­

Thailand Update Conference sentatives from the Department of Foreign Affairs and Trade, the Depart­ ment of Defence, and the Department of Employment and Youth Affairs spoke about the needs of their respec­ tive departments. A session on ‘What Business Wants from Thai Studies?’ was particularly lively, with several business consultants sharing their ex­ periences in advising foreign business people on how to operate in Thailand. It was quite clear that some business people had to be persuaded that they needed to be sensitive to cultural matters if they were to do business successfully. Academics from around the coun­ try (Canberra, Sydney, Townsville in Queensland, as well as Melbourne) addressed problems in their respec­ tive disciplines. Many universities have strong links with Thai universi­ ties, in science and agriculture as well as in the humanities and social sci­ ences. The basic problem with lan­ guage instruction is that Thai is a ‘small enrolment language’ „ „ when compared to such languages as Japan­

One of the frustrating aspects of attending a large conference is, of course, that one cannot attend all or even most of the panels and conse­ quently one can hardly do justice to the rich variety of topics discussed. In three ‘state-of-the art’ panels, a summary of Philippine Studies re­ search in five continents was given. The discussions about theoretical and methodological standing of ‘Philippine Studies’ raised the cru­ cial question about whether the field could survive without becoming in­ ternational and comparative. As suggested by the title, the focus of the Sixth Conference was on the twentieth century, and, largely, par­ ticipants kept their period limited to that century, which was different from former occasions where re­ search on the Spanish colonial peri­ od was more present. A well-organized conference, it drew widespread appreciation from its Filipino and foreign participants. The next conference was announced to take place in the Netherlands in 2004. ■

ese and Indonesian, and university administrators are not enthusiastic about funding programmes that at­ tract small enrolments. There was a general consensus that the NTSC should actively pursue its role as a national co-ordinator ofThai Studies and as a resource for those wanting to encourage the study of Thailand especially in the tertiary sec­ tor. The meeting felt there was a need for better Australian media coverage ofThailand and for the media to make more use of Australian expertise when seeking comment rather than relying on foreign experts who do not have an Australian perspective. Last year’s Update focused on the impact of the Asian financial crisis on the Thai economy. The suggestion for next year’s Update was that it should focus on defence and strategic issues. The National Thai Studies Centre in co-operation with the Faculty of Asian Studies and the Research School of Pacific and Asian Studies of the Australian National University also organized a two-day ‘mini-confer­ ence’ in Thai Studies, Research on Thailand in the 1990s, which took place on 18-19 August 2000 in Canber­ ra. Postgraduate and honours stu­ dents as well as academic staff from around the country contributed pa­ pers on a wide range of topics. ■