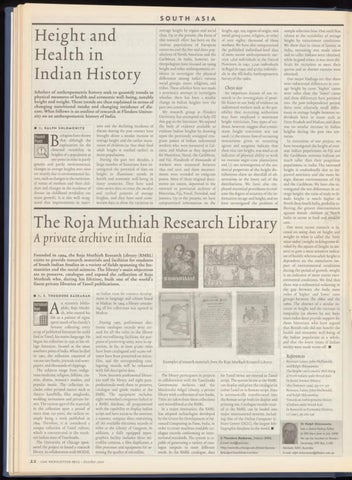 iol°gists have shown that although the J L J explanation for the ( l ) I observed variability in V&#39; 2*&#39;Vj heights of a population at any point in time is partly genetic and partly environmental, changes in average heights over time are mainly due to environmental fac­ tors, such as changes in the nutrition­ al status of mothers and their chil­ dren and changes in the incidence of disease (as childhood morbidity can stunt growth). It is also well recog­ nized that improvements in nutri­

tion and the declining incidence of disease during the past century have brought about a secular increase in average height and the earlier matu­ ration of children (so that their final adult height is reached earlier) in many populations. During the past two decades, a large number of historians have in­ vestigated the potential of data on height to illuminate trends in health and economic well-being in many countries. They have used time-series data to trace the secular and cyclical patterns of average heights, and they have used crosssection data to show the variation in

average height by region and social class. Up to the present, the focus of this research effort has been on the various populations of European countries and the free and slave pop­ ulations of North American and the Caribbean. In India, however, an­ thropologists have focused on using height and other anthropometric ev­ idence to investigate the physical differences among India’s various social groups: castes, religions, and tribes. These scholars have not made a systematic attempt to investigate whether there has been a secular change in Indian heights over the past two centuries. My research group at Flinders University has attempted to help fill this gap in the literature. We expand the body of evidence available to evaluate Indian heights by drawing upon the previously untapped emi­ grant passes of Indian indentured workers who were measured at Cal­ cutta and Madras as they departed for Mauritius, Natal, the Caribbean, and Fiji. Hundreds of thousands of workers were measured between 1842 and 1916, and these measure­ ments were recorded on emigrant passes. Most of these original docu­ ments are extant, deposited in the national or provincial archives of Mauritius, Fiji, Natal, Trinidad, and Jamaica. Up to the present, we have computerized information on the

height, age, sex, region of origin, and social group (caste, religion, or tribe) of over eighty thousand of these workers. We have also computerized the published individual-level data of more recent anthropometric sur­ veys: 2,835 individuals in the United Provinces in 1941; 3,240 individuals in Begal in 1945; and 47,835 individu­ als in the All-India Anthropometric Survey of the 1960s.

Chest size An important feature of our re­ search is the investigation of possi­ ble biases in our body of evidence on indentured workers such as the pos­ sibility that recruiting authorities may have employed a minimum height restriction. Two types of evi­ dence, however, suggest that a mini­ mum height restriction was not used: (1) the extant lists of recruiting instructions given to recruiting agents and surgeons indicate that chest size, not height, was used as an indicator of physical ability to work on overseas sugar-cane plantations; and (2) our investigation of the sta­ tistical properties of the height dis­ tributions show no shortfall of ob­ servations in the lower tail of the distributions. We have also em­ ployed statistical procedures to eval­ uate the degree of accuracy of the in­ formation on age and height, and we have investigated the problem of

n eccentric biblio­ phile, Roja Muthi­ ah, who started his M f J . . life as a painter of signs, I I * • ■ ■ ■ ■ spent much of his family’s ■ ■■* fortune collecting every scrap of published literature he could find in Tamil, his native language. He began his collection in 1950 at his vil­ lage Kottaiyur, located at the most southern point of India. When he died in 1992, the collection consisted of 100,000 rare books, journals and news­ papers, and thousands of clippings. The subjects range from indige­ nous medicine, religion, folklore, cin­ ema, drama, women’s studies, and popular music. The collection in­ cludes other printed matter such as theatre handbills, film songbooks, wedding invitations and private let­ ters. The various ages of the materials in the collection span a period of more than 150 years, the earliest ex­ ample being a work published in 1804. Therefore, it is considered a unique reflection of Tamil culture, which is concentrated in the south­ ern Indian state ofTamilnadu. The University of Chicago spon­ sored the project to found a research library, in collaboration with MOZHI,

an Indian trust for resource develop­ ment in language and culture based in Madras. In 1994, a library contain­ ing all his collections was opened in Madras.

During 1995, preliminary elec­ tronic catalogue records were cre­ ated for all the titles in the library and microfilming facilities, for pur­ poses of preserving texts, were in op­ eration. So far, at least 47,000 titles have been catalogued and 10,000 vol­ umes have been preserved on micro­ film, and the corresponding cata­ loguing records will be enhanced with full descriptive data. Now, fourteen professional librari­ ans staff the library and eight paraprofessionals work there to preserve, catalogue and guide readers at the RMRL. The equipment includes: eight networked computers linked to a RMRL database, all programmed with the capability to display Indian script and have access to the internet; a scanner; compact discs containing all the available electronic records of titles at the Library of Congress. In addition, a fully equipped repro­ graphics facility includes three mi­ crofilm cameras, a film duplicator, a film processor and equipment for as­ sessing the quality of microfilm.

sample selection bias. One such bias relates to the variability of average height by recruitment conditions. We show that in times of famine in India, recruiting was made easier and so taller Indians were obtained, while in good times, it was more dif­ ficult for recruiters to meet their quotas and so shorter recruits were obtained. Our major findings are that there were substantial differences in aver­ age height by caste: ‘higher’ castes were taller than the lower’ castes and these differences have persisted into the post-Independence period; there were relatively small differ­ ences in average height between in­ dividuals born in states such as Uttar Pradesh and Madras; and there was no secular increase in Indian heights during the past two cen­ turies. In extensions of our project, we have investigated the height of over­ seas Indian populations in Fiji and the Caribbean: overseas Indians are much taller than their progenitor populations in India. The increased height is undoubtedly due to im­ proved nutrition and the more be­ nign disease environments of Fiji and the Caribbean. We have also in­ vestigated the sex differences in av­ erage height: the ratio of male to fe­ male height is much higher in North than South India, probably re­ flecting the greater discrimination against female children in North India in access to food and medical care. Our most recent research is fo­ cused on using data on height and weight in what is called the ‘body mass index’ (weight in kilograms di­ vided by the square of height in me­ ters) to gain a more sensitive indica­ tor of health: whereas adult height is dependent on the cumulative im­ pact of environmental conditions during the period of growth, weight is an indicator of more recent envi­ ronmental conditions. We find that there was a substantial widening in the gap between the body mass index of ‘higher’ and ‘lower’ caste groups between the 1880s and the 1960s. The absence of a secular in­ crease in height and the increase in inequality (as shown by our body mass index data) provide support for those historians who have argued that British rule did not benefit the health and economic well-being of the Indian population as a whole, and that the lower strata of Indian society were made worse off ■

References Examples of research materials from

The library participates in projects in collaboration with the Tamilnadu Government Archives and the Maraimalai Adigal Library, a private library with a collection of rare books. Titles are taken from these collections and microfilmed at the RMRL. In a major innovation, the RMRL has adapted technologies developed by the Centre for Development of Ad­ vanced Computing in Pune, India, in order to create machine-readable cat­ alogue records conforming to inter­ national standards. The system is ca­ pable of generating a variety of cata­ logue outputs to meet different needs. In the RMRL catalogue, data

for Tamil items are entered in Tamil script. The system in use at the RMRL can display and print the catalogue in either Tamil or in Roman script. Data is automatically transliterated into the Roman script both for display and printing out. Catalogue records creat­ ed at the RMRL can be loaded into major international systems, includ­ ing that of the Online Computer Li­ brary Centre (OCLC), the largest bib­ liographic database in the world. ■

He can be reached at Flinders University, GPO Box 2 100,