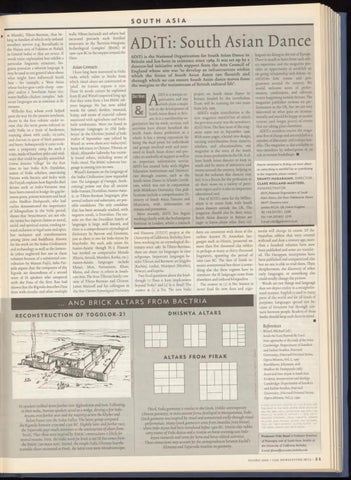 SOUTH as Munda), Tibeto-Burman, that be­ long to families of which only isolated members survive (e.g. Burushaski in the Hunza area of Pakistan or Nahali in Central India) or that are extinct. If words resist explanation but exhibit a particular linguistic structure, lin­ guists postulate a substrate language. It may be used to test general ideas about what might have influenced South Asia - for example, a ‘West Asian wheat-barley-goat-cattle-sheep com­ plex’ and/or a ‘Southeast Asian ricewater-buffalo-chicken complex.’ Sub­ strate languages are as common as di­ nosaurs. Wilhelm Rau, whose work helped pave the way for the present synthesis, shows in the first volume under re­ view that the term grama referred in early Vedic to a train of herdsmen, roaming about with cattle, ox-carts, and chariots in quest of fresh pastures and booty. Subsequently it came to de­ note a temporary camp for such a train, made ofbamboo-poles and reedmats that could be quickly assembled. Grama denotes ‘village’ for the first time in late Vedic. R.N. Dandekar, nestor of Vedic scholars, associating Varuna with Bactria and Indra with the Panjab, explains how Rigvedic dual deities such as Indra-Varunau may have been created to bridge the gap be­ tween poets, priests/warriors and local cults. Madhav Deshpande, who had earlier demonstrated the importance of bilingualism in the Vedic period, shows that ‘Arya/Anarya’ are not eth­ nic terms but express claims to moral, social, and spiritual status, tending to­ ward exclusion in legal texts and epics, but inclusion and transformation among jains and Buddhists. Known for his work on the Indus Civilization and archaeology as well as the Samaveda (often neglected but not in these volumes because of a substantial con­ tribution by Masato Fujii), Asko Parpola argues that the composers of the Rigveda are descendents of a second wave of LA speakers who competed with the Dasa of the first. Rau had shown that the Rigveda describes Dasa forts with circular and often multiple

walls. Viktor Sarianidi and others had excavated precisely such fortified structures in the ‘Bactrian-Margiana Archeological Complex’ (BMAC) of 1900-1500 BC in the steppes around the Oxus.

Asian Contacts I have long been interested in Vedic istaka which refers to bricks from which ritual altars are constructed or ‘piled’. An Iranian cognate is istya. These IA words cannot be explained from IE and Witzel suspected long ago that they come from a lost BMAC sub­ strate language. He has now added words for camel, donkey, mustard, hemp, and terms of material culture associated with agriculture and brickbuilt settlements. More are listed in ‘Substrate Languages in Old IndoAryan&#39; in the Electrontcjoumal o f Vedic Studies of September 1999 (edited by Witzel at: www.shore.net/-india/ejvs). Some left traces in Chinese, Tibetan, or Altaic. Alexander Lubotsky has recent­ ly found others, including terms of Vedic ritual. The BMAC substrate lan­ guage is coming into its own. Witzel’s footnote on the language of the Indus Civilization (now expanded into The Languages o f Harappa, forth­ coming) points out that all ancient Indo-Iranian, Dravidian, Austro-Asiatic, or Tibeto-Burman languages, plus several isolates and substrates, are pos­ sible candidates. The only candidate that has been seriously studied, with negative result, is Dravidian. The rea­ sons are that the Dravidian family of languages is large, well known, and there is a comprehensive etymological dictionary by Burrow and Emeneau, ju st as there is one for Indo-Aryan by Mayrhofer. No such aids exists for Austro-Asiatic though H.-J. Pinnow has worked on comparative Munda (Kharia, Santali, Mundari, Korku, etc.). Austro-Asiatic languages include Khmer, Mon, Vietnamese, Khasi, Khmu, and about 75 others in Southeast Asia. The Sino-Tibetan family con­ sists of Tibeto-Burman and Chinese. James Matisoff and his colleagues in the Sino-Tibetan Etymological Dictionary

ADiTi: South Asian Dance ADiTi is the National Organization for South Asian Dance in Britain and has been in existence since 1989 . It was set up by a dancers-led initiative with support from the Arts Council o f England whose aim was ‘to develop an infrastructure within which the forms o f South Asian dance can flourish and through which we can ensure South Asian dance moves from the margins to the mainstream o f British cultural life’. DiTi is a unique or­ e ganization and one _ _,w hich plays a major %£ role in the development of j South Asian dance in Brit­ ain. It is a membership or­ ganization but its work, services, and activities have always benefited the South Asian dance profession as a whole. It has a strong reputation for being the focal point for individuals and groups involved with and inter­ ested in South Asian dance and pro­ vides an umbrella of support as well as an important information service. ADiTi has created links with Higher Education Institutions and Universi­ ties through courses, such as the South Asian Dance in Schools Certifi­ cate, which was run in conjunction with Middlesex University. Our pub­ lications include a comprehensive Di­ rectory of South Asian Dancers and Musicians, with information on venues and promoters. More recently, ADiTi has begun working closely with the Roehampton Institute in London, where a research

and Thesaurus (STEDT) project at the University of California, Berkeley, have been working on an etymological dic­ tionary since 1987. In Tibeto-Burman, there are about 250 languages in nine subgroups. Important languages be­ sides Tibetan and Burmese are Jingpho (Kachin), Lushai, Manipuri (Meithei), Newari, and Lepcha. Two final questions about the break­ through: (1) Does it have implications beyond Vedic? and (2) Is it final? The answer to (x) is Yes. The new Vedic

project on South Asian Dance in Britain, funded by the Leverhulme Trust, will be running for two years from July 1999ADiTi’s major contribution is the new magazine extrADiTion of which the previous avatar was the newsletter ADiTi News. The first issue of the mag­ azine came out in September 1999. With more pages, a brand new design, exciting contributions from dancers, scholars, and educationalists, our magazine is the voice of the South Asian dance profession in the UK. It al­ lows South Asian dancers to keep in touch and be aware of initiatives and events around the country, helping to break the isolation that dancers may feeL It is a forum for the profession to air their views on a variety of perti­ nent topics and it is also an important educational tool. One of ADiTi’s aims for the Millen­ nium is to create links with South Asian dancers outside the UK. The magazine should also be their voice. South Asian dancers in Britain are eager to know about what their col­ dates are consistent with those of the earliest known IE: Anatolian lan­ guages such as Hittite, preserved on more than five thousand clay tablets in perhaps as many as thirty thousand fragments, spanning the period of 1650-1200 BC. The date of Greek re­ mains controversial but there is some­ thing else the three regions have in common: the IE languages came from elsewhere and induced bilingualism. The answer to (2) is No. Science is never final for new facts and argu-

leagues are doing in the rest of Europe. There is much to leam from each oth­ ers experience and the magazine pro­ vides an opportunity to establish an on-going relationship and debate, extrADiTion lists events and pro­ grammes around the country. We would welcome news of perfor­ mances, conferences, and relevant events happening outside Britain. The magazine publishes reviews on per­ formances in the UK, but we are very interested in what goes on interna­ tionally and would be happy to receive reviews (and longer pieces) of events that are taking place elsewhere. ADiTi’s members receive the maga­ zine free o f charge and are entitled to a number ofdiscounts and various ben­ efits. The magazine is also available to non-members by subscription or on sale at various bookshops. ■ Anyone interested in finding out more about us, subscribing to extrADiTion or contributing to the magazine, please contact

merits will change its course. Of the Anatolian tablets that were covered with soil and dust a century ago, more than a hundred volumes have now been published and some are translat­ ed. The Harappan inscriptions have been published and computerized also but no one is able to read them. Their decipherment, the discovery of other early languages, or something else could totally change the picture. Words are not things and language does not depict reality in a straightfor­ ward manner. English is used in many parts of the world and for all kinds of purposes. Languages spread not be­ cause of invasions but through con­ tacts between people. Readers of these books should keep such facts in mind.

IA speakers trekked down ju rth er into Afghanistan and Iran. Following in their wake, Iranian speakers acted as a wedge, driving a few IndoAiyans even further west and the majority across the Kltyber and Bolan Passes into the Indus Valley. The latfergroup composed the Rigveda between 1700 and 1200 BC. Slightly later and further east, the Yajurveda pays much attention to the construction o f altars from bricks. T hat these were inspired by BMAC constructions is likely jo r several reasons. First, the Vedic word for brick is not IE but comesfrom the BMAC (see m ain text). Second, the simple Vedic Dhisnya hearths resemble altars excavated a t Pirak, the latter even more Mondrianesquc.

A MORE EXTENSIVE VERSION OF THIS REVIEW WAS

Third, Vedicgeometry is sim ilar to the Greek. Unlike contemporary Chinese geometry, or more ancientforms developed in Mesopotamia, VedoGreekgeometiy was inspired by ritual and transmitted orally through ritual performances. M any Greekgeometers came from Anatolia (Asia Minor; where Indo-Aryan had been introduced before 1400 BC. H ittite clay-tables carry names of Vedic deities and a treatise on horse-training uses IndoAryan numerals and termsfor horse and horse-related activities. These connections may account/or the correspondences between Euclid’s Elements and Yajurveda treatises on geometry.