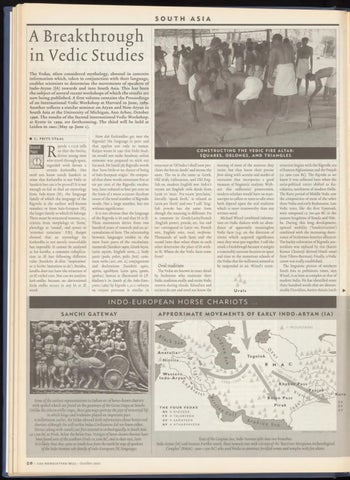 A Breakthrough in Vedic Studies

us that the Asvins, divine young men who travel through space, regarded with favour a certain Karkandhu. One need not know much Sanskrit to sense that Karkandhu is not Vedic or Sanskrit but can it be proved? It is not enough to fail to find an etymology from Indo-Aryan (IA), the language family of which the language of the Rigveda is the earliest well-known member; or from Indo-European (IE), the larger family to which IA belongs. There m ust be structural reasons, i.e., criteria from morphology or ‘form,’ phonology or ‘sound’, and syntax or ‘sentence structure.’ F.B.J. Kuiper showed that an etymology for Karkandhu is not merely unavailable but impossible. It cannot be analysed as kar-kandhu, a common reduplica­ tion in IE but following different rules (Sanskrit: di-dhiti ‘inspiration’ or ci-kirsha ‘intention to do’). Besides, kandhu does not have the structure of an IE verbal root. Nor can we analyse: kark-andhu because no derivational form andhu occurs in any IA or IE word.

How did Karkandhu get into the Rigveda? No language is pure and that applies not only to names. Kuiper wrote in 1991 that Vedic Stud­ ies would not make headway unless someone was prepared to stick out his neck. He listed 383 Rigvedic words that ‘have little or no chance of being of Indo-European origin.’ He comput­ ed that these words constitute five or six per cent of the Rigvedic vocabu­ lary, later reduced to four per cent on the basis of a more accurate database count of the total number of Rigvedic words. Not a large number, but not without significance. It is not obvious that the language of the Rigveda is IA and that IA is IE. These statements derive from two hundred years of research and an ac­ cumulation of facts. The relationship between languages resides in the most basic parts of the vocabulary: numerals (Sanskrit sapta, Greek hepta, Latin septem, English seven,...), body parts (pada, pedon, pedis, foot], com­ mon verbs (ash, esti, is), conjugations and declensions (Sanskrit agms, agnim, agmbhyas; Latin ignis, ignem, iambus). Syntax is illustrated in J.P. Mallory&#39;s In Search o f the Indo-Euro­ peans (1989) by Rigveda 1.32.1: indrasya nu viriyani pravocam is similar in

*2* , .. issassm CONSTRUCTI NG THE VEDIC FIRE ALTAR SQUARES, OBLONGS, AND TRIANGLES structure to ‘O f Indra I shall now pro­ claim the heroic deeds’ and means the same. The nu is the same as Greek, Old Irish, Lithuanian, and Old Eng­ lish nu, modern English now. Indra’s viryam are English virile deeds from Latin vir ‘man.’ Pra vocam ‘proclaim,’ literally ‘speak forth,&#39; is related to Latin pro ‘forth’ and voco ‘I call.’ Eng­ lish provoke has the same form though the meaning is different. Pro is common in Greek/Latin/French /English protect, provide, etc. Vac and voc- correspond to Latin vox, French voix, English voice, vocal, vociferous. Thousands of such facts and the sound laws that relate them to each other determine the place of IA with­ in IE. Where do the Vedic facts come from?

Oral tradition The Vedas are known in exact detail by brahmins who maintain their Vedic tradition orally and recite Vedic mantras during rituals. Ritualists and reciters do not and need not know the

The Vedas, often considered mythology, abound in concrete information which, taken in conjunction with their language, enables scientists to determine the movements o f speakers o f Indo-Aryan (IA] towards and into South Asia. This has been the subject o f several recent workshops o f which the results are now being published. A first volume contains the Proceedings o f an International Vedic Workshop at Harvard in June, 1989. Another reflects a similar seminar on Aryan and Non-Aryan in South Asia at the University o f Michigan, Ann Arbor, October 1 9 96 . The results o f the Second International Vedic Workshop, at Kyoto in 1999, are forthcoming. The third will be held at Leiden in 2002 (May 29-June 2). By FRI TS STAAL

meaning of most of the mantras they recite; but they know their precise form along with accents and modes of recitation that incorporate a good measure of linguistic analysis. With­ out this millennial preservation, modern scholars would have no man­ uscripts to collect or texts to edit since both depend upon the oral tradition which is more trustworthy than any written word. Michael Witzel combined informa­ tion on Vedic dialects with an abun­ dance of apparently meaningless Vedic facts (e.g. on the direction of rivers) which acquired significance once they were put together. I call the result a breakthrough because it assigns a reasonably accurate location in space and time to the numerous schools of the Vedas that for millennia seemed to be suspended in air. Witzel’s recon-

struction begins with the Rigvedic era of Eastern Afghanistan and the Panjab (ca 1900-1200 BC). The Rigveda as we know it was collected later when the socio-political centre shifted to Kuruksetra, northwest of modern Delhi. The Kuru period o f Middle Vedic saw the composition of most of the other three Vedas and early Brahmanas. Late Vedic texts, like the first Upanisads, were composed ca 700-450 BC in the eastern kingdoms of Kosala and Videha. During this long development, upward mobility (‘Sanskritization’) combined with the increasing domi­ nance of brahmana-ksatriya alliances. The barley cultivation of Rigvedic pastoralism was replaced by rice (Suniti Kumar Chatterji derived Hindi cawal from Tibeto-Burman). Finally, a Vedic canon was orally established. The linguistic picture of northern South Asia in prehistoric times, says Witzel, is as least as complex as that of modern India. He has identified some three hundred words that are demon­ strably Dravidian, Austro-Asiatic (such

Some o f the earliest representations in Indian art o f horse-drawn chariots with spoked wheels are fou nd on the gatew ays o f the Great Stupa at Sanchi. Unlike the otherworldly stupa, these gateways portray the joys o f terrestrial life in which kings and brahmins played an important part. A millennium earlier, the Vedas abound with information about horses and chariots although the still earlier Indus Civilization did not know either. Horses (along with camels) are first attested to archeologically in South Asia ca 1700 BC at Pirak, below the Bolan Pass. Vestiges o f horse-drawn chariots have beenJound west o f the southern Urals ca 2000 BC; and to their east, later. It is likely that they came to South Asiafrom the north by way o f speakers o f the Indo-Iranian sub-fam ily o f Indo-European (IE) languages