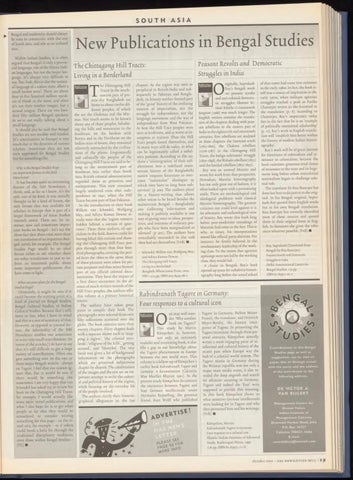 SOUTH Bengal and modernity should always be seen in connection with the rest of South Asia, and not as an isolated area. Within Indian Studies, it is often argued that Bengali is only a provin­ cial language, one of the fifteen Indi­ an languages, but not the major lan­ guage. It’s always very difficult to say, ‘but look, this is also the nation­ al language of a nation state, albeit a small nation state’. There are about four to five hundred million speak­ ers of Hindi at the most, and often it’s not their mother tongue, but a second tongue. There are two hun­ dred fifty million Bengali speakers. So we’re not really talking about a small language. It should also be said that Bengal Studies are not terribly well funded. [It’s continuation in Europe] is very much due to the devotion of various scholars. Sometimes they are not even appointed for Bengal Studies but for something else. Why is the Bengal Studies Page an importatit/eature in the HAS Newsletter?

It has become quite an interesting feature of the HAS Newsletter, I think, and, as far as I know, it’s the only one of its kind. It was initially thought to be a kind of forum, the only forum that was available for scholars in Europe that is part of a larger framework [of Asian Studies research news]. There are, for in­ stance, new and sometimes impor­ tant books on Bengal - let’s say the sheer fact that there exist more than one translation of an important Ben­ gali novel, for example. The Bengal Studies Page would be an ideal forum either to ask whether there are other translations or just to in­ form an interested public about some important publications that have come to light. What are your plans/or the Bengal Studies Page?

Ultimately, it might be nice if it could become the starting point of a kind of journal on Bengal Studies, Bengal Cultural Studies, or Indian Cultural Studies, Because that’s still, more or less, what I have in mind and this is a sort of summary of that. However, as opposed to journal for­ mat, the informality of the HAS Newsletter enables one sometimes to write very small contributions. [In terms of the articles,] I do have to say that it’s still difficult to get a large variety of contributions. Often one gets something sent on the two or three major Bengali writers - always on Tagore. I feel that one cannot ig­ nore that, but it would be nice if there would be something else sometimes. I am very happy that van Schendel has asked me to review his book on the Chittagong Hill Traas, for example. I would actually like some more varied publications, and what I also hope for is to get other people so far that they would be stimulated to consider writing something for this page - on the vi­ sual arts, for example - or if others could break a little bit through the traditional disciplinary traditions, even those within Bengal Studies. (TC) ■

Living in a Borderland