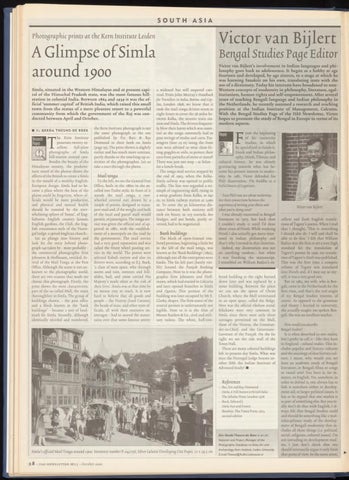 A Glimpse of Simla around 1900

Simla, situated in the Western Himalayas and at present capi­ tal o f the Himachal Pradesh state, was the most famous hillstation in colonial India. Between 1864 and 1939 it was the of­ ficial ‘summer capital’ o f British India, which raised this small town from the status o f a mere pleasure resort to a powerful community from which the government o f the Raj was con­ ducted between April and October. By GERDA T H E U N S - D E BOER

he Kern Institute Research possesses twenty ex­ Project cellent full-plate photographs of Simla hill-station around 1900. Besides the beauty of the Himalayan scenery, the predomi­ nant m otif of the photos shows the efforts of the British to create a Simla in the mould of a wealthy EnglishEuropean design. Simla had to be­ come a place where the heat of the plains could be forgotten, where of­ ficials would be more productive, and physical and mental health should be restored by the over­ whelming sphere o f ‘home’, of Englishness: English country houses, English gardens, the Club, the Eng­ lish renaissance-style of the Vicere­ gal Lodge, a spired Anglican church... Let us plunge into history and look for the story behind photo­ graph 240 taken by - most probably the commercial photographic firm Johnston &amp; Hoffmann, entitled: Ar­ rival of the Mail Tonga at the Post Office. Although the scene is not un­ known to the photographic world, there are two reasons that made me choose this photograph. Firstly, the print shows the most characteristic part of the so-called Mall, the main thoroughfare in Simla. The group of buildings shown, - the post office and a block known as the ‘bank buildings’ - became a sort of land­ mark for Simla. Secondly, although identically entitled and numbered,

the Kern Institute photograph is not the same photograph as the one published by Pat Barr &amp; Ray Desmond in their book on Simla (page 59). The print shown is slightly earlier and has much more contrast, partly thanks to the touching up ac­ tivities of the photographer. Let us take a tour through the photo.

Mail tonga To the left, we see the General Post Office, built in the 1880s in the socalled neo-Tudor style. In front of it stands the mail tonga, a two­ wheeled covered cart drawn by a couple of ponies, designed to trans­ port mail and, if the weight and bulk of the local and parcel mail would permit, of passengers. The tonga ser­ vice was given the official seal of ap­ proval in 1881, with the establish­ ment of a monopoly on the road by the government. The mail service had a very good reputation and was called the finest wheel posting ser­ vice in the world. The ponies were selected Kabuli entires and also its drivers were, according to E.J. Buck, ‘a class of men apart, who through storm and rain, torrents and hillslides, hail, and snow carried His Majesty’s mails often at the risk of their lives’. Simla was at that time by no means easy to reach. It is now hard to believe that all goods and people - the Viceroy (Lord Curzon], the heads of state, and other state of­ ficials, all with their extensive en­ tourages - had to ascend the moun­ tains over that same famous artery:

a widened but still unpaved cartroad. From John Murray’s Handbook fo r Travellers m India, Burma and Cey­ lon, London 1898, we know that it took the mail tonga drivers seven to eight hours to cover the 58 miles be­ tween Kalka, the nearest train sta­ tion and Simla. The drivers frequent­ ly blew their horns which was essen­ tial as the tonga constantly had to pass strings of mules and carts. Pas­ sengers (fare: 25 rs] using the front seat were advised to wear close-fit­ ting goggles or veils, to protect their eyes from particles of stone or metal! There was just one stop - at Solon for a lunch-break. The tonga mail service stopped by the end of 1903, when the KalkaSimla railway was opened to public traffic. The line was regarded a tri­ umph of engineering skill, rising in a steep gradient from Kalka, at 640 m, to Simla railway station at 2,060 m. To cover the 95 kilometres dis­ tance between both stations still took six hours, as 103 tunnels, 800 bridges, and 900 bends, partly re­ versed, had to be negotiated.

Bank b u ild in g s The block of open-fronted tim­ bered premises, beginning a little bit to the left of the mail tonga, was known as the ‘Bank Buildings’ (1895), although not all the enterprises were banks. The far left part (barely visi­ ble) housed the Punjab Banking Company. Next to it was the photo­ graphic firm Johnston and Hoff­ mann, which had started in Calcutta and later opened branches in Simla and Quetta. This portion of the building was later occupied by Mr E. Clarke, draper. The firm name of the central portion is unfortunately not legible. Next to it is the firm of Messrs Ranken &amp; Co., civil and mili­ tary tailors. The white, half-tim-

Victor van Bijlert’s involvement in Indian languages and phi­ losophy goes back to adolescence. It began as a hobby at age fourteen and developed, by age sixteen, to a stage at which he was learning Sanskrit on his own, translating texts with the use o f a dictionary. Today his interests have broadened to nonWestem concepts o f modernity in philosophy, literature, egal­ itarianism, human rights and self-empowerment. After several years o f teaching Bengali language and Indian philosophy in the Netherlands, he recently assumed a research and teaching position at the Indian Institute o f Management, Calcutta. With the Bengal Studies Page o f the HAS Newsletter, Victor hopes to promote the study o f Bengal in Europe in terms o f its modern aspects. rom the beginning of his university studies, in which he specialized in Sanskrit, Greek and Indian philos­ ophy, Hindi, Tibetan, and cultural history, he was already gravitating towards what has be­ come his present interest in moder­ nity. In 1987, Victor defended his PhD dissertation. The Buddha as a Valid Means o f Cognition. Your PhD was not about m odernity. Arc there connections between the experience o f writingjxmr thesis and wharyou’re doing now? I was already interested in Bengali literature in 1975, but back then I couldn’t study it until I’d done three years of Hindi. While studying Hindi I also actually got more inter­ ested in Indian philosophy and that’s why I turned in that direction. Indeed, my dissertation was not on anything modern... but when I was finishing the manuscript, I stumbled on William Radice’s ex-

bered building to the right burned down later and was replaced by a stone building. Between the pines we can see the spires of Christ Church, where the Mall terminated in an open space, called the Ridge. Here was the official rikshaw stand. Rikshaws were very common in Simla since there were only three carriages permitted on the Mall, these of the Viceroy, the Comman­ der-in-chief, and the LieutenantGoverner of the Punjab. On the far right we see the side wall of the Town Hall. There are many colonial buildings left in present-day Simla. What was once the Viceregal Lodge houses an­ other HAS: the Indian Institute of Advanced Study! ■

cellent and fresh English transla­ tions of Tagore’s poems. When I read that I thought, ‘This is something I should also do. I will and shall be able to do this.’ I felt that William Radice was the first to set a very high standard for the translation of Tagore’s poems. In 1996, my transla­ tion ofTagore’s G itali was published. This was the first time a compete volume of Tagore was translated into Dutch and, if I may say so my­ self, it was a very good one. But in 1985, my wife, who is Ben­ gali, came to the Netherlands for the first time, and that’s the real origin of my Bengal Studies interest, of course. As opposed to the grammar and theory I learned in university, she actually taught me spoken Ben­ gali. She was an excellent teacher. How woulcfyou describe Bengal Studies? It is often described as area studies, but I prefer to call it - like they have in England - cultural studies. This in­ cludes popular and literary cultures and the sociology of that literary cul­ ture. I mean, why would you not have an academic study of Bengali literature, or Bengali films or songs or visual arts? You have it, for in­ stance, in English. Yet, somehow, in order to defend it, one always has to link it somehow either to develop­ ment aid, or larger political issues. It has to be argued that one studies it as part of something else. But you re­ ally don’t do that with English. I al­ ways felt that Bengal Studies could and should be something like a mul­ tidisciplinary study of the develop­ ment of Bengali modernity that in­ cludes all these things [i.e. political, social, religious, cultural issues). I’m not intruding on development stud­ ies, I just don’t think that one should necessarily argue it only from that point of view. In the same sense,