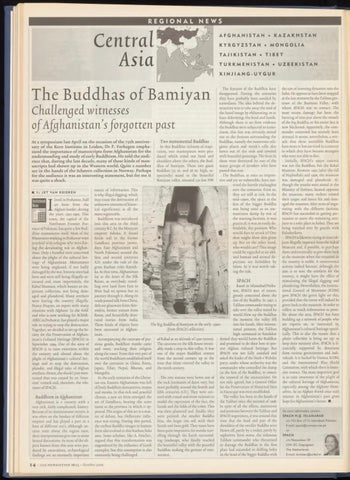 The Buddhas of Bamiyan Challenged witnesses of Afghanistan sforgotten past At a symposium last April on the occasion o f the 75th anniver­ sary o f the Kern Institute in Leiden, Dr P. Verhagen empha­ sized the importance o f manuscripts from Afghanistan for the understanding and study o f early Buddhism. He told the audi­ ence that, during the last decade, many o f these kinds o f man­ uscripts had shown up in the Western world. Quite a number are in the hands o f the Schoyen collection in Norway. Perhaps for the audience it was an interesting statement, but for me it was quite a shock. By JET VAN KRIEKEN

lived in Peshawar, half IH IIW Ü 1 an hour from the [ Afghan border, during the years 1993-1995. This town, the capital of the Northwest Frontier Pro­ vince of Pakistan, has quite a few Bud­ dhist monuments itself Most of the Westerners working in Peshawar were involved with refugees who were flee­ ing the devastating war in Afghan­ istan. Only a handful were concerned about the plight of the cultural her­ itage o f Afghanistan. Monuments were being neglected, if not badly damaged by the war, historic sites had been and were still being illegally ex­ cavated and, most importantly, the Kabul Museum, which houses an im­ portant collection, was being dam­ aged and plundered. Many artefacts were leaving the country illegally. Nancy Dupree, an expert with many relations with Afghans ‘in the field’ and who is now working for ACBAR/ARIC in Peshawar, has played a major role in trying to stop the destruction. Together, we decided to set up the So­ ciety for the Preservation of Afghan­ istan’s Cultural Heritage (SPACH) in September 1994. One of the aims of SPACH is to raise awareness within the country and abroad about the plight of Afghanistan’s cultural her­ itage and to stop the destruction, plunder, and illegal sales of Afghan artefacts. Hence, the shock I ju st men­ tioned that was caused by an ‘inno­ cent’ remark and, therefore, the rele­ vance of SPACH.

Buddhism in Afghanistan Afghanistan is a country with a very rich, fairly complicated, history. Because o f its mountainous terrain, it was often on the borders of different empires and has played a part in a host of different era’s. Although an­ cient texts about the region exist, their interpretations give rise to some heated discussions. As most of the ob­ jects known from this area were pro­ duced by excavations, archaeological findings are an extremely important 14 •

Two monumental Buddhas In this Buddhist richness of inspi­ ration, two masterpieces were pro­ duced which stand out head and shoulders above the others, the Bud­ dhas of Bamiyan. These two giant Buddhas (55 m. and 38 m. high, re­ spectively) stand in the beautiful Bamiyan valley, situated 230 km NW

The features of the Buddhas have disappeared. During the centuries they have probably been assailed by iconoclasts. The idea behind the de­ struction was to take away the soul of the hated image by obliterating, or at least deforming, the head and hands. Although there is no firm evidence the Buddhas were subjected to iconoclasm, this fate was certainly meted out to the frescoes surrounding the Buddhas, namely the numerous reli­ gious places and monk’s cells also hewn out of the rock and covered with beautiful paintings. The faces in these were destroyed by one of the many groups of invaders who have passed that way. The Buddhas, at once so impres­ sive and yet so vulnerable, have sur­ vived the hostile onslaughts over the centuries. Even so, they are still at risk. In the mid-1990s, the space at the feet o f the bigger Buddha was being used as an am­ m unition dump by one of the warring factions. It was practical: it was an easily defendable, dry position. Who would dare to attack it? One shot m ight blow this giant up. But on the other hand, who would care? This image could be regarded as an idol, and hum an and animal de­ pictions are forbidden by Islam. So it was worth tak­ ing the risk.

source of information. This is why illegal digging, which may cause the destruction of unknown contents of histor­ ical significance, is all the more regrettable. Buddhism was introduced into this area in the third century B.C. by the Mauryan emperor Ashoka. It found v &#39;W f fertile soil in the former Gandhara province [nowa­ days, East Afghanistan and North Pakistan) around the first and second centuries A.D. under the rule of the great Kushan ruler Kanishka. At that time, Afghanistan lay at the heart of the Silk SPACH Route, as everybody travel­ Based in Islamabad/Peshaling over land from East to war, SPACH was, of course, West had no option but to greatly concerned about the journey through it. Along its fate of the Buddha. In 1997, a roads passed silk from China, Taliban commander trying to delicate glassware from Alex­ take over the valley stated he andria, bronze statues from would blow up the Buddhas Rome, and beautifully deco­ the moment the valley fell rated ivories from India. into his hands. After interna­ The By Buddha o f Bam iyan in the early 1990s These kinds of objects have tional protests, the Taliban fro m SPACH collection) been excavated in Afghan­ high command in Kandahar istan. denied they would harm the Buddhas of Kabul at an altitude of 2500 metres. Accompanying the caravans of pre­ and promised to do their best to pro­ The caravans on the Silk Route invari­ cious goods, Buddhist monks came tect Afghan cultural heritage. But ably made a stop in this valley. It was and went, teaching their religion SPACH was not fully satisfied and one o f the major Buddhist centres along the route. From this very part of asked the leader of the Hezb-e Wahdat the world Buddhism established itself from the second century up to the party, under whose authority was the time that Islam entered the valley in over the centuries in China, Korea, commander who controlled the dump the ninth century. Japan, Tibet, Nepal, Bhutan, and (at the foot of the Buddha), to ensure Mongolia. the removal of the ammunition. He The two statues were hewn out of In the early centuries of the Christ­ not only agreed, but a General Office the rock (estimates of dates vary, but ian era, Eastern Afghanistan was full for the Preservation of Historical Sites most probably around the fourth and of lively Buddhist monasteries, stupas in Hazarajat was even established. fifth centuries A.D.). They were cov­ and monks. In this rich and peaceful The valley has been in the hands of ered with a mud and straw mixture to climate, a new art form emerged: the the Taliban since the autum n of 1998. model the expression of the face, the art of Gandhara, bearing the same In spite of all the efforts, statements hands and the folds of the robes. This name as the province in which it ap­ and promises between the Taliban and was then plastered and, finally, they peared. The origin of this art is a m at­ SPACH negotiators, it was around that were painted: the smaller Buddha ter of debate, but Hellenistic influ­ time that the head and part of the blue, the larger one red, with their ence was strong. During this period, shoulders of the smaller Buddha were hands and faces gold. They must have the earliest Buddha images in human blown off partly by a rocket, partly by been quite impressive for monks trav­ form also evolved in this Kushan/Saka explosives. Even worse, the infamous elling through the harsh surround­ area. Some scholars, like A. Foucher, Taliban commander who threatened ing landscape, who finally reached argued that this transformation was to damage the Buddhas in the first the beautiful valley with the peaceful engendered by the influence of Greek place had succeeded in drilling holes Buddhas making the gesture of reas­ examples, but this assumption is also in the head of the bigger Buddha with surance. constantly being challenged.

the aim of inserting dynamite into the holes. He appears to have been stopped at the last moment by the Taliban gov­ ernor of the Bamiyan Valley, with whom SPACH was in contact. The most recent damage has been the burning of tires just above the mouth of the big Buddha, so his entire face is now blackened. Apparently, the com­ mander concerned has recently been arrested. It seems, nevertheless, a mir­ acle that these incredible Buddhas have more or less survived in a country in which they have become strangers who were not able to flee. Initially, SPACH’s major concern was not the Buddhas, but the Kabul Museum. Between 1992 (after the fall of Najibullah) and 1996, the museum was damaged and plundered. Al­ though the attacks were aimed at the Ministry of Defence, located opposite the museum, many rockets missed their target and hence hit and dam­ aged the museum. After years of nego­ tiating with the different factions, SPACH has succeeded in getting per­ mission to move the remaining arte­ facts to a safer place in Kabul. They are being watched over by guards with Kalashnikovs. SPACH is likewise trying to trace ob­ jects illegally exported from the Kabul Museum and, if possible, to purchase them and eventually to give them back to the museum when the situation in the country is stable. A controversial activity indeed because, although the aim is to save the artefacts for the country, it might have the effect of stimulating the illegal digging and plundering. Nevertheless, the Interna­ tional Council of Museums (ICOM) gave SPACH the green light on this, provided that the items will indeed be given back to the museum. In order to collect as much information as possi­ ble about the area, SPACH has been building up a network of people who are experts on, or interested in, Afghanistan’s cultural heritage specif­ ically. This is also the reason that a photo collection is being set up: to keep their memory alive. SPACH is fi­ nancially supported by donations from various governments and indi­ viduals. It is backed by Unesco, ICOM, and the International Blue Shield Committee, with which there is inten­ sive contact. The most important goal is to raise awareness of the plight of the cultural heritage of Afghanistan, especially among the Afghans them­ selves. As an Afghan friend once said: interest in Afghanistan’s past gives hope for Afghanistan’s future. ■ For more information, contact SPACH H.Q. ISLAMABAD c/o P.O. Box 2713, Islamabad, Pakistan E-mail: spach@comsats.net.pk or: SPACH c/o Nassaulaan 29 2341 EC Oegstgeest The Netherlands E-mail: vkrieken@xs4all.nl