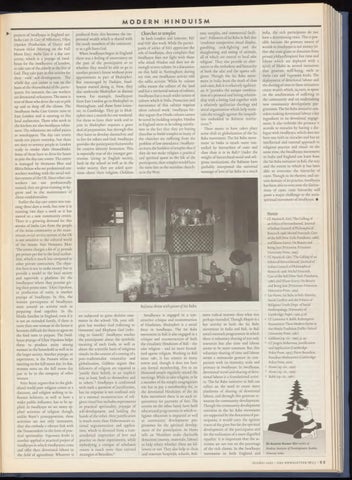 MODERN projects of Swadhyaya in England are: Sneha Care (A Care of Affection), Eikya Utpadan [Production of Unity) and Poonarn Milan (Meeting on the Full Moon Day). Sneha Care is a day care centre, which is a prayo^a of Swadfvyaya for the Swadhyayees of London, to take care of the elderly at the feet of God. They take part in this activity for their own self-development. The whole day care centre is run on the basis of the shramabhakti of the partic­ ipants. For instance, the care workers are devotional volunteers. The same is true of those who drive the van to pick up and to drop off the clients. The Swadhyaya Sneha Care Centre runs in East London and is catering to five local authorities. Those who work in the kitchen are also Swadhyaya volun­ teers. The volunteers are called pujam or worshippers. The day care centre needs ten pujaris everyday, but there are sixty to seventy people in London ready to render their shramabhakti. Some of them have to drive for hours to join the day care centre. The centre is managed by Hemanta Bhai and Bhiru Behen who are professional care workers working with the social wel­ fare system of the UK. Since other care workers are not professionally trained, they are given training in hy­ giene and in the maintenance of client-confidentiality. Earlier the day care centre was run­ ning three days a week, but now it is running two days a week as it has moved to a new community centre. There is a growing demand for this service of Sneha Care from the people of the Asian community as the main­ stream social service system of the UK is not sensitive to the cultural world of the Asians. Says Hemanta Bhai: ‘The centre charges a fee of 35 pounds per person per day to the local author­ ities, which is much less compared to other private contractors. The objec­ tive here is not to make money but to provide a model to the local society and toprovide a platform for the Swadhyayees where they practise giv­ ing their prime time.’ Eikya Utpadana, or production of unity, is another prayo^a of Swadhyaya. In this, the women participants of Swadhyaya meet around an activity such as preparing food together. In the Hindu families in England, even if it is not an extended family, if there is more than one woman in the house it becomes difficult for them to agree on the food item to prepare. The Swadhyaya prayoga of Eikya Utpadana helps them to produce unity among women in the household as well as in the larger society. Another prayoga, or experiment, is the Poonam Milan or meeting on the full moon day. In this, women meet on the full moon day just to be in the company of other women. Peter Beyer argues that in the glob­ alized world pure religion comes at a discount, and religion seeking to in­ fluence believers, as well as have a wider public influence, has to be ap­ plied. In Swadhyaya we see many ap­ plied activities of religion though, unlike Beyer’s presupposition, these activities are not only immanent, they also embody a vibrant link with the Transcendent in the form of prac­ tical spirituality. Yo^eswara Krishi is another applied or practical project of Swadhyaya in which Swadhyayees come and offer their devotional labour in the field of agriculture. Whatever is

produced from this becomes the im­ personal wealth which is shared with the needy members of the communi­ ty as a gift from God. When Swadhyaya began in England there was a feeling of uncertainty on the part of the participants as to whether they would be able to go to another person’s house without prior appointment as part of Bhaktipheri. But encouraged by Dadajee, Swadhyayees started doing it. Now, they also undertake Bhaktipheri in distant towns. For example, Swadhyayees from East London go in Bhaktipheri to Nottingham, and those from Leices­ ter, to Cambridge. They go in Bhaktiphen once a month for one weekend. For them to leave their work and to join in Bhaktipheri requires a great deal of preparation, but through this they learn to develop themselves and to live for others and God. Swadhyaya provides the participants frameworks for creative identity formation. This is especially true of the younger gen­ eration. Living in English society, both in the school as well as in the wider society, they are asked ques­ tions about their religion. Children

Churches to temples In both London and Leicester, RSS and VHP also work. While the partici­ pants of sakhas of RRS appreciate the role of Swadhyaya, they complain that Swadhyaya does not fight with those who attack Hindus and does not do enough to save culture. In a discussion on this held in Nottingham during my visit, one Swadhyayee activist told the sakha activist: &#39;While by culture sakha means the culture of the land and has a territorial notion of culture, Swadhyaya has a much wider notion of culture which is Vedic. Protection and nurturance of this culture requires silent cultural work.’ Swadhyaya fur­ ther argues that Hindu culture cannot be saved by building temples. Hindus in England seem to be taking satisfac­ tion in the fact that they are buying churches to build temples as many of the churches are suffering from the problem of low attendance. Swadhyay­ ees warn the builders of temples that if they do not make religion a practical and spiritual quest in the life of the participants, then temples would have the same fate as the mainline church­ es in the West.

nese temples, and commercial facili­ ties’7. Followers of Sai Baba in Bali also condemn competitive ritual display, gambling, cock-fighting and the slaughtering and eating of animals, all of which are central to local adat religion’. They also provide an alter­ native to the orthodoxy and hierarchy of both the adat and the a^ama reli­ gions. Though the Sai Baba move­ ment in India bears the mark of class and caste, Bali it is relatively egalitari­ an. It ‘provides the unique combina­ tion of a personal and loving relation­ ship with a loving God together with a relatively egalitarian theology and social organization which help main­ tain the struggle against the inequali­ ties embedded in Balinese institu­ tions.’8 There seems to have taken place some shift in globalization of the Sai Baba movement. The Sai Baba move­ ment in India is much more con­ trolled by hierarchies of caste and class than it is in Bali.9 Under the weight of hierarchical social and reli­ gious institutions, the Balinese have probably interpreted the universal message of love of Sai Baba in a much

India, the rich participants do not have a determining voice. This is pos­ sible because the primary source of wealth in Swadhyaya is not money (ei­ ther the state grant or donation from private philanthropists) but time and labour which are deployed with a spirit of Bhakri in several initiatives that generate well-being, such as Sneha Care and Yogeswara Krisht. The deployment of devotional labour and the sharing of time in these initiatives create wealth which, iatu m , is spent on the amelioration of suffering in the community and on undertaking new community development pro­ grammes, The Sai Baba initiative con­ siders making devotional labour a key ingredient in its devotional engage­ ment. It also rethinks the primacy it accords to miracles by having a dia­ logue with Swadhyaya, which does not have any faith in miracles and has an intellectual and rational approach to religious practice and ritual. At the same time, the Swadhyaya movement in India and England can learn from the Sai Baba initiative in Bali, the way and the extent to which it has been able to overcome the hierarchy of caste. Though in its rhetoric and cer­ tain domain of its practice, Swadhyaya has been able to overcome the distinc­ tions of caste, caste hierarchy still poses a major challenge to the socio­ spiritual movement of Swadhyaya. ■

are subjected to quite derisive com­ ments in the school: ‘Oh, your reli­ gion has monkey God (referring to Hamman] and Elephant God (refer­ ring to Ganesh).’ Swadhyaya teaches the participants about the symbolic meaning of such Gods, as well as about the scientific basis of religious rituals. In the context of a coming of a post-traditionalist rationality and globalization, Giddens argues that followers of religion are required to justify their beliefs, in an implicit way at least, both to themselves and to others.’8 Swadhyaya is confronted with such a question of justification, but its response is not confined only to a rational reconstruction of reli­ gious ritual but includes experiments in practical spirituality, pray05as of self-development, and holding the hands of the other. Here justification is much more than Habermasian ra­ tional argumentation and applica­ tion, which is divorced from a tran­ scendental inspiration of love and practice in these experiments, while embodying a critique of scholastic reason is much more than rational strategies ofBourdieu.6

Swadhyaya is engaged in a con­ structive critique and reconstruction of Hinduism. Bhaktiphen is a social force in Swadhyaya. The Sai Baba movement in Bali is also engaged in a critique and reconstruction of both the ritualistic Hinduism of Bali - the adat religion - and its more formal­ ized agama religion. Working in Bali since 1981, it has centres in many towns and, though it does not have any formal membership, five to six thousand people regularly attend the meetings. While in adat religion, to be a member of the temple congregation one has to pay a membership fee, in the devotional Hinduism of the Sai Baba movement there is no such re­ quirement for payment of fees. The centres on the other hand, have both educational programmes in which re­ ligious education is imparted as well as community development pro­ grammes for the spiritual develop­ ment of the participants. As Howe tells us: ‘Members make charitable donations (money, materials, labour) to help others whether these are fol­ lowers or not. They also help to clean and renovate hospitals, schools, Bali-

more radical manner than what was perhaps intended. Though Bhajan is a key activity in both the Sai Baba movement in India and Bali, in Bali social outreach programmes in which there is voluntary sharing of not only resources but also time and labour seems to be more common. But this voluntary sharing of time and labour seems a minuscule gesture in com­ parison with its intensity, scale and primacy in Swadhyaya. In Swadhyaya, devotional travel and sharing of devo­ tional labour is a foundational activi­ ty. The Sai Baba initiative in Bali can reflect on the need to create more platforms of sharing of devotional labour, and through this generate re­ sources for community development. Though the community development activities in the Sai Baba movement are supported by the donations of par­ ticipants, it would carry the egoistic traces of the giver but for the spiritual development of the participants and for the realization of a more dignified equality. It is important that the ac­ tivities are not run on the patronage of the rich clients. In the Swadhyaya movement in both England and