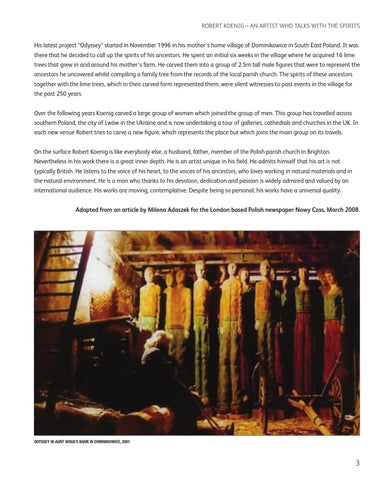 ROBERT KOENIG – AN ARTIST WHO TALKS WITH THE SPIRITS His latest project “Odyssey” started in November 1996 in his mother’s home village of Dominikowice in South East Poland. It was there that he decided to call up the spirits of his ancestors. He spent an initial six weeks in the village where he acquired 16 lime trees that grew in and around his mother’s farm. He carved them into a group of 2.5m tall male figures that were to represent the ancestors he uncovered whilst compiling a family tree from the records of the local parish church. The spirits of these ancestors together with the lime trees, which in their carved form represented them, were silent witnesses to past events in the village for the past 250 years. Over the following years Koenig carved a large group of women which joined the group of men. This group has travelled across southern Poland, the city of Lwów in the Ukraine and is now undertaking a tour of galleries, cathedrals and churches in the UK. In each new venue Robert tries to carve a new figure, which represents the place but which joins the main group on its travels. On the surface Robert Koenig is like everybody else, a husband, father, member of the Polish parish church in Brighton. Nevertheless in his work there is a great inner depth. He is an artist unique in his field. He admits himself that his art is not typically British. He listens to the voice of his heart, to the voices of his ancestors, who loves working in natural materials and in the natural environment. He is a man who thanks to his devotion, dedication and passion is widely admired and valued by an international audience. His works are moving, contemplative. Despite being so personal, his works have a universal quality. Adapted from an article by Milena Adaszek for the London based Polish newspaper Nowy Czas, March 2008.

The journey of the figures explained. 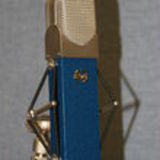