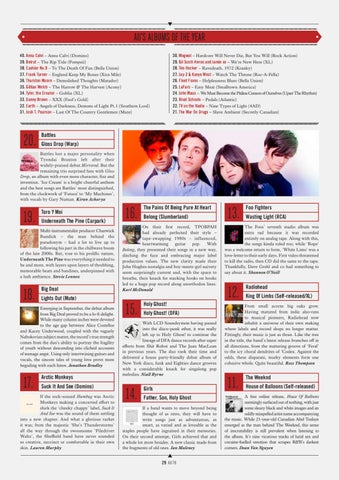 Battles lost a major personality when Tyondai Braxton left after their widely-praised debut Mirrored. But the remaining trio surprised fans with Gloss Drop, an album with even more character, fizz and invention. ‘Ice Cream’ is a bright cheerful anthem and the best songs are Battles’ most distinguished, from the clockwork of ‘Futura’ to ‘My Machines’, with vocals by Gary Numan. Kiran Acharya

Multi-instrumentalist producer Chazwick Bundick – the man behind the pseudonym – had a lot to live up to following his part in the chillwave boom of the late 2000s. But, true to his prolific nature, Underneath The Pine was everything it needed to be and more, with layers upon layers of throbbing, memorable beats and basslines, underpinned with a lush ambience. Stevie Lennox

Emerging in September, the debut album from Big Deal proved to be a lo-fi delight. While many column inches were devoted to the age gap between Alice Costelloe and Kacey Underwood, coupled with the vaguely Nabokovian subject matter, the record’s true strength comes from the duo’s ability to portray the fragility of youth without descending into clichéd accounts of teenage angst. Using only intertwining guitars and vocals, the sincere tales of young love prove more beguiling with each listen. Jonathan Bradley

If the rock-soused Humbug was Arctic Monkeys making a concerted effort to shirk the ‘cheeky chappy’ label, Suck It And See was the sound of them settling into a new chapter. And what a glorious racket it was; from the majestic ‘She’s Thunderstorms’ all the way through the swoonsome ‘Piledriver Waltz’, the Sheffield band have never sounded so creative, succinct or comfortable in their own skin. Lauren Murphy

The Pains Of Being Pure At Heart Belong (Slumberland)

On their first record, TPOBPAH had already perfected their style – tape-swapping 1980s – influenced, heartwarming guitar pop. With Belong, they presented their songs in a new way, ditching the fuzz and embracing major label production values. The new clarity made their John Hughes nostalgia and boy-meets-girl naivety seem surprisingly current and, with the space to breathe, their knack for stacking hooks on hooks led to a huge pop record along unorthodox lines. Karl McDonald

With LCD Soundsystem having passed into the disco-punk ether, it was really left up to Holy Ghost! to continue the lineage of DFA dance records after super efforts from Shit Robot and The Juan MacLean in previous years. The duo took their time and delivered a house party-friendly debut album of New York disco, funk and Eighties dance grooves with a considerable knack for singalong pop melodies. Niall Byrne

If a band wants to move beyond being thought of as retro, they will have to write songs just as adventurous, as smart, as varied and as loveable as the staples people have ingrained in their memories. On their second attempt, Girls achieved that and a whole lot more besides. A new classic made from the fragments of old ones. Ian Maleney

The Foos’ seventh studio album was extra rad because it was recorded entirely on analog tape. Along with this, the songs kinda ruled too; while ‘Rope’ was a welcome return to form, ‘White Limo’ was a love-letter to their early days. First video threatened to kill the radio, then CD did the same to the tape. Thankfully, Dave Grohl and co had something to say about it. Shannon O’Neill

From small acorns big oaks grow. Having matured from indie also-rans to musical pioneers, Radiohead now inhabit a universe of their own making where labels and record shops no longer matter. Fittingly, their music is just as thran. Like the tree in the title, the band’s latest release branches off in all directions, from the stuttering groove of ‘Feral’ to the icy choral dendrites of ‘Codex. Against the odds, these disparate, murky elements form one cohesive whole. Quite beautiful. Ross Thompson

The Weeknd House of Balloons (Self-released)

A free online release, House Of Balloons seemingly surfaced out of nothing, with just some sleazy black and white images and an oddly misspelled artist name accompanying the music. While 21-year-old Canadian Abel Tesfaye emerged as the man behind The Weeknd, this sense of inscrutability is still prevalent when listening to the album. It’s nine vicarious tracks of lurid sex and cocaine-fuelled emotion that scrapes R&amp;B’s darkest corners. Dean Van Nguyen 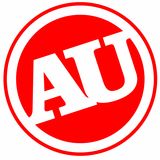