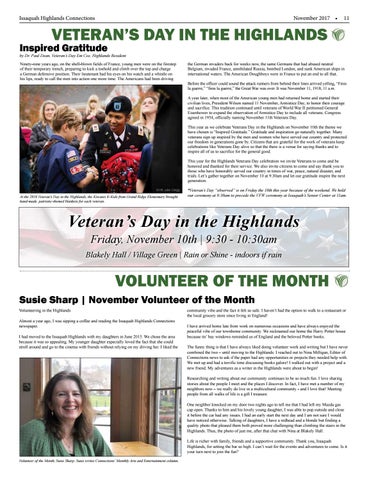 VETERAN’S DAY IN THE HIGHLANDS

by Dr. Paul Dean, Veteran’s Day Em Cee, Highlands Resident Ninety-nine years ago, on the shell-blown fields of France, young men were on the firestep of their temporary trench, preparing to kick a toehold and climb over the top and charge a German defensive position. Their lieutenant had his eyes on his watch and a whistle on his lips, ready to call the men into action one more time. The Americans had been driving

the German invaders back for weeks now, the same Germans that had abused neutral Belgium, invaded France, annihilated Russia, bombed London, and sunk American ships in international waters. The American Doughboys were in France to put an end to all that. Before the officer could sound the attack runners from behind their lines arrived yelling, “Finis la guerre,” “finis la guerre,” the Great War was over. It was November 11, 1918, 11 a.m. A year later, when most of the American young men had returned home and started their civilian lives, President Wilson named 11 November, Armistice Day, to honor their courage and sacrifice. This tradition continued until veterans of World War II petitioned General Eisenhower to expand the observation of Armistice Day to include all veterans. Congress agreed in 1954, officially naming November 11th Veterans Day. This year as we celebrate Veterans Day in the Highlands on November 10th the theme we have chosen is “Inspired Gratitude.” Gratitude and inspiration go naturally together. Many veterans sign up inspired by the men and women who have served our country and protected our freedom in generations gone by. Citizens that are grateful for the work of veterans keep celebrations like Veterans Day alive so that the there is a venue for saying thanks and to inspire all of us to sacrifice for the general good. This year for the Highlands Veterans Day celebration we invite Veterans to come and be honored and thanked for their service. We also invite citizens to come and say thank you to those who have honorably served our country in times of war, peace, natural disaster, and trials. Let’s gather together on November 10 at 9:30am and let our gratitude inspire the next generation.

At the 2016 Veteran’s Day in the Highlands, the Kiwanis K-Kids from Grand Ridge Elementary brought hand-made, patriotic-themed blankets for each veteran.

*Veteran’s Day “observed” is on Friday the 10th this year because of the weekend. We hold our ceremony at 9:30am to precede the VFW ceremony at Issaquah’s Senior Center at 11am.

VOLUNTEER OF THE MONTH Susie Sharp | November Volunteer of the Month Volunteering in the Highlands Almost a year ago, I was sipping a coffee and reading the Issaquah Highlands Connections newspaper. I had moved to the Issaquah Highlands with my daughters in June 2015. We chose the area because it was so appealing. My younger daughter especially loved the fact that she could stroll around and go to the cinema with friends without relying on my driving her. I liked the

community vibe and the fact it felt so safe. I haven’t had the option to walk to a restaurant or the local grocery store since living in England! I have arrived home late from work on numerous occasions and have always enjoyed the peaceful vibe of our townhome community. We nicknamed our home the Harry Potter house because its’ bay windows reminded us of England and the beloved Potter books. The funny thing is that I have always liked doing volunteer work and writing but I have never combined the two – until moving to the Highlands. I reached out to Nina Milligan, Editor of Connections news to ask if the paper had any opportunities or projects they needed help with. We met up and had a terrific time discussing books galore! I walked out with a project and a new friend. My adventures as a writer in the Highlands were about to begin! Researching and writing about our community continues to be so much fun. I love sharing stories about the people I meet and the places I discover. In fact, I have met a number of my neighbors now – we really do live in a multicultural community - and I love that! Meeting people from all walks of life is a gift I treasure. One neighbor knocked on my door two nights ago to tell me that I had left my Mazda gas cap open. Thanks to him and his lovely young daughter, I was able to pop outside and close it before the car had any issues. I had an early start the next day and I am not sure I would have noticed otherwise. Talking of daughters, I have a redhead and a blonde but finding a quality photo that pleased them both proved more challenging than climbing the stairs in the Highlands. Thus, the photo of just me, after that chat with Nina at Blakely Hall. Life is richer with family, friends and a supportive community. Thank you, Issaquah Highlands, for setting the bar so high. I can’t wait for the events and adventures to come. Is it your turn next to join the fun?