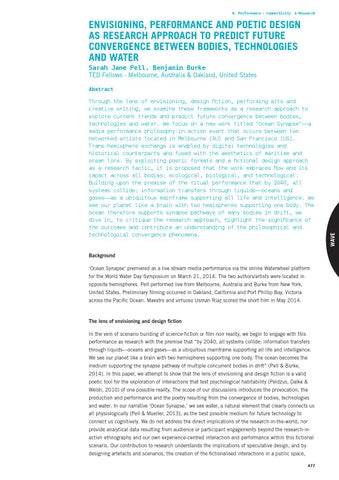 technologies and water. We focus on a new work titled ‘Ocean Synapse’–—a media performance philosophy-in-action event that occurs between two networked artists located in Melbourne (AU) and San Francisco (US). historical counterparts and fused with the aesthetics of maritime and

Building upon the premise of the ritual performance that by 2040, all gases––as a ubiquitous mainframe supporting all life and intelligence. We ocean therefore supports synapse pathways of many bodies in drift, we

the outcomes and contribute an understanding of the philosophical and technological convergence phenomena.

Background ‘Ocean Synapse’ premiered as a live stream media performance via the online Waterwheel platform for the World Water Day Symposium on March 21, 2014. The two authors/artists were located in opposite hemispheres. Pell performed live from Melbourne, Australia and Burke from New York, United States. Preliminary filming occurred in Oakland, California and Port Phillip Bay, Victoria across the Pacific Ocean. Maestro and virtuoso Usman Riaz scored the short film in May 2014.

The lens of envisioning and design fiction In the vein of scenario building of science-fiction or film noir reality, we begin to engage with this performance as research with the premise that “by 2040, all systems collide: information transfers through liquids—oceans and gases—as a ubiquitous mainframe supporting all life and intelligence. We see our planet like a brain with two hemispheres supporting one body. The ocean becomes the medium supporting the synapse pathway of multiple concurrent bodies in drift” (Pell &amp; Burke, 2014). In this paper, we attempt to show that the lens of envisioning and design fiction is a valid poetic tool for the exploration of interactions that test psychological habitability (Peldzus, Dalke &amp; Welsh, 2010) of one possible reality. The scope of our discussions introduces the provocation, the production and performance and the poetry resulting from the convergence of bodies, technologies and water. In our narrative ‘Ocean Synapse,’ we see water, a natural element that clearly connects us all physiologically (Pell &amp; Mueller, 2013), as the best possible medium for future technology to connect us cognitively. We do not address the direct implications of the research-in-the-world, nor provide analytical data resulting from audience or participant engagements beyond the research-inaction ethnography and our own experience-centred interaction and performance within this fictional scenario. Our contribution to research understands the implications of speculative design, and by designing artefacts and scenarios, the creation of the fictionalised interactions in a public space, 477

Performance: live art, outdoor actions & online-performances. Art, Science, Ecology, Community and Youth respond to the theme: “Water Views: Caring and Daring.” An astonishing number and variety of entries – 125 articles & 540 pages – makes this illustrated nine-chapter book a rich collection of ongoing work internationally, often with a local focus, on raising awareness and responding to water issues. 450 participants, from 34 countries across 5 continents, interacted with audience ‘live’ on the Internet & in 18 physical venues or ‘nodes’, through Waterwheel, an online platform dedicated to water. The Symposium, held 17-23 March 2014, also integrated youth & inter-generational dialogue with the "Voice of the Future" strand. The book contains three types of entries, based on the presentation given as part of the Symposium: “Splash”– project overview, “Ripple”– detailed project description, and “Wave”– peer-reviewed article on original research. 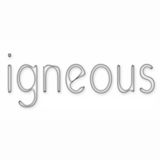