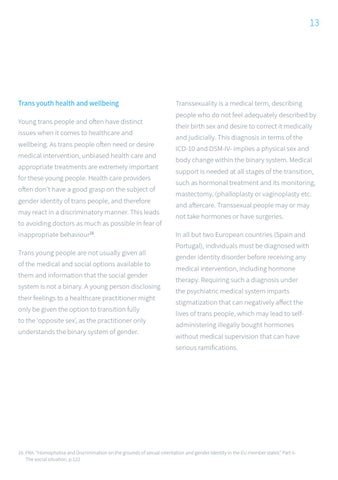 Trans youth health and wellbeing Young trans people and often have distinct issues when it comes to healthcare and wellbeing. As trans people often need or desire medical intervention, unbiased health care and appropriate treatments are extremely important for these young people. Health care providers often don’t have a good grasp on the subject of gender identity of trans people, and therefore may react in a discriminatory manner. This leads to avoiding doctors as much as possible in fear of inappropriate behaviour16. Trans young people are not usually given all of the medical and social options available to them and information that the social gender system is not a binary. A young person disclosing their feelings to a healthcare practitioner might only be given the option to transition fully to the ‘opposite sex’, as the practitioner only understands the binary system of gender.

Transsexuality is a medical term, describing people who do not feel adequately described by their birth sex and desire to correct it medically and judicially. This diagnosis in terms of the ICD-10 and DSM-IV- implies a physical sex and body change within the binary system. Medical support is needed at all stages of the transition, such as hormonal treatment and its monitoring, mastectomy, (phalloplasty or vaginoplasty etc. and aftercare. Transsexual people may or may not take hormones or have surgeries. In all but two European countries (Spain and Portugal), individuals must be diagnosed with gender identity disorder before receiving any medical intervention, including hormone therapy. Requiring such a diagnosis under the psychiatric medical system imparts stigmatization that can negatively affect the lives of trans people, which may lead to selfadministering illegally bought hormones without medical supervision that can have serious ramifications.

16. FRA: “Homophobia and Discrimination on the grounds of sexual orientation and gender identity in the EU member states” Part IIThe social situation, p.122 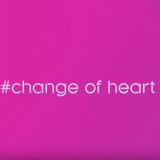