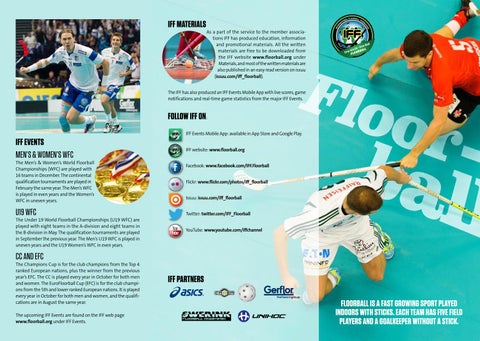 IFF Materials As a part of the service to the member associations IFF has produced education, information and promotional materials. All the written materials are free to be downloaded from the IFF website www.floorball.org under Materials, and most of the written materials are also published in an easy read version on issuu (issuu.com/iff_floorball). The IFF has also produced an IFF Events Mobile App with live scores, game notifications and real-time game statistics from the major IFF Events.

IFF Partners Floorball is a fast growing sport played indoors with sticks. Each team has five field players and a goalkeeper without a stick.

Floorball history in short Some roots of floorball have been found as far back as from 1958 when an industry in Minneapolis, USA introduced plastic sticks under the name Cosom. Cosom floor hockey was played in the USA and Canada. In the 1970’s the floorball sport we play today was developed in Sweden and in 1986 the International Floorball Federation was founded by the Swedish, Finnish and Swiss Floorball Associations.

Floorball Floorball is the sport of today and becoming the sport of tomorrow. During the 30 years of floorball history, the development and growth of the sport has been amazing. Since the first Floorball Federation was founded in 1981 in Sweden, the sport has spread all over the world and it is now played in over 60 countries. Floorball is the fastest growing sport in a number of countries and now has a total of 300,000 licensed players and approximately 2 million recreational players in the world. There are no signs that this positive development would slow down in the near future.

Although floorball is a professional sport amongst the elite players requiring their fulltime involvement, it is still also a sport for all. Floorball is widely played in schools, among youth and adult recreation and corporate sports groups and it has become the alternative team sport for both men and women in a number of countries. One of the great advantages of Floorball is the easiness to start playing and the relatively low costs. Floorball is a sport for short and tall, young and old, boys and girls as well as disabled players – Anyone can play the game!

The Strategic vision for the upcoming decade is defined as follows in the IFF Vision statement:

“To be the internationally approved sole owner of the dynamic sport of Floorball and to ensure all its different forms and identities and to serve as an attractive sport for all. Being a healthy organisation with sufficient human and financial resources, with over 100 international member associations, which are having and organising their own national championships, and with five continental confederations. Floorball is adaptable to be played on a global level taking into consideration all the different infrastructural conditions, according to the standardised game rules, with a World Floorball Championships played with participants from five continents, based on the qualifications and being on the program of the Universiade, the World Games and/or the Olympic Games until 2020.” 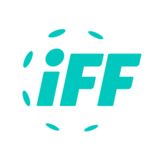 IFF Flyer with General information about Floorball and the IFF.

IFF Flyer with General information about Floorball and the IFF.