IFAW - The Economics of Japanese Whaling 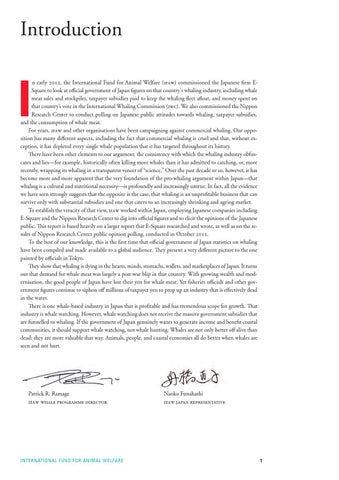 Introduction n early 2012, the International Fund for Animal Welfare (IFAW) commissioned the Japanese firm ESquare to look at oﬃcial government of Japan figures on that country&#39;s whaling industry, including whale meat sales and stockpiles, taxpayer subsidies paid to keep the whaling fleet afloat, and money spent on that country’s vote in the International Whaling Commission (IWC). We also commissioned the Nippon Research Center to conduct polling on Japanese public attitudes towards whaling, taxpayer subsidies, and the consumption of whale meat. For years, IFAW and other organisations have been campaigning against commercial whaling. Our opposition has many diﬀerent aspects, including the fact that commercial whaling is cruel and that, without exception, it has depleted every single whale population that it has targeted throughout its history. ere have been other elements to our argument: the consistency with which the whaling industry obfuscates and lies—for example, historically often killing more whales than it has admitted to catching, or, more recently, wrapping its whaling in a transparent veneer of “science.” Over the past decade or so, however, it has become more and more apparent that the very foundation of the pro-whaling argument within Japan—that whaling is a cultural and nutritional necessity—is profoundly and increasingly untrue. In fact, all the evidence we have seen strongly suggests that the opposite is the case, that whaling is an unprofitable business that can survive only with substantial subsidies and one that caters to an increasingly shrinking and ageing market. To establish the veracity of that view, IFAW worked within Japan, employing Japanese companies including E-Square and the Nippon Research Center to dig into oﬃcial figures and to elicit the opinions of the Japanese public. is report is based heavily on a larger report that E-Square researched and wrote, as well as on the results of Nippon Research Center public opinion polling, conducted in October 2012. To the best of our knowledge, this is the first time that oﬃcial government of Japan statistics on whaling have been compiled and made available to a global audience. ey present a very diﬀerent picture to the one painted by oﬃcials in Tokyo. ey show that whaling is dying in the hearts, minds, stomachs, wallets, and marketplaces of Japan. It turns out that demand for whale meat was largely a post-war blip in that country. With growing wealth and modernisation, the good people of Japan have lost their yen for whale meat. Yet fisheries oﬃcials and other government figures continue to siphon oﬀ millions of taxpayer yen to prop up an industry that is eﬀectively dead in the water. ere is one whale-based industry in Japan that is profitable and has tremendous scope for growth. at industry is whale watching. However, whale watching does not receive the massive government subsidies that are funnelled to whaling. If the government of Japan genuinely wants to generate income and benefit coastal communities, it should support whale watching, not whale hunting. Whales are not only better oﬀ alive than dead; they are more valuable that way. Animals, people, and coastal economies all do better when whales are seen and not hurt.

IFAW - The Economics of Japanese Whaling

This is a detailed economic report, produced by the International Fund for Animal Welfare, on the economics of the Japanese scientific whaling programme. 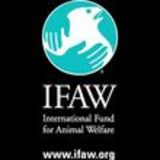