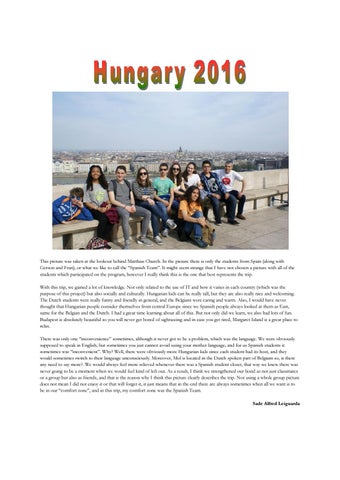 This picture was taken at the lookout behind Matthias Church. In the picture there is only the students from Spain (along with Gerson and Fran), or what we like to call the “Spanish Team”. It might seem strange that I have not chosen a picture with all of the students which participated on the program, however I really think this is the one that best represents the trip. With this trip, we gained a lot of knowledge. Not only related to the use of IT and how it varies in each country (which was the purpose of this project) but also socially and culturally. Hungarian kids can be really tall, but they are also really nice and welcoming. The Dutch students were really funny and friendly in general, and the Belgians were caring and warm. Also, I would have never thought that Hungarian people consider themselves from central Europe since we Spanish people always looked at them as East, same for the Belgian and the Dutch. I had a great time learning about all of this. But not only did we learn, we also had lots of fun. Budapest is absolutely beautiful so you will never get bored of sightseeing and in case you get tired, Margaret Island is a great place to relax. There was only one “inconvenience” sometimes, although it never got to be a problem, which was the language. We were obviously supposed to speak in English, but sometimes you just cannot avoid using your mother language, and for us Spanish students it sometimes was “inconvenient”. Why? Well, there were obviously more Hungarian kids since each student had its host, and they would sometimes switch to their language unconsciously. Moreover, Mol is located in the Dutch spoken part of Belgium so, is there any need to say more?. We would always feel more relieved whenever there was a Spanish student closer, that way we knew there was never going to be a moment when we would feel kind of left out. As a result, I think we strengthened our bond as not just classmates or a group but also as friends, and that is the reason why I think this picture clearly describes the trip. Not using a whole group picture does not mean I did not enjoy it or that will forget it, it just means that in the end there are always sometimes when all we want is to be in our “comfort zone”, and in this trip, my comfort zone was the Spanish Team. Sade Alfred Leiguarda