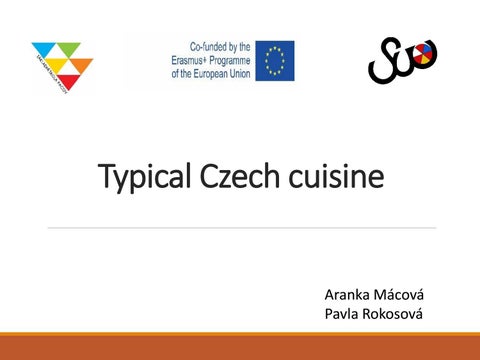 Typical Czech cuisine Czech cuisine is a specific type of Central European cuisine. They are typically thicker soup with snack and many kinds of stewed meat sauce, in both cases the basis of cooked or stewed vegetables, often with cream, and roasted meat with natural sauces. Many cakes and pastries that are popular in Central Europe come from Czech cuisine. The Czech Republic has a wide range of field crops, fruits, vegetables, fish and game. There is also a varied Czech menu. In the Czech Republic, the collection of mushrooms, which are a relatively frequent addition of food, is also expanded. The Czech menu usually consists of two or more courses - the first is traditionally a soup, the second main meal, and a dessert, compote or vegetable salad.

Soups An important part of Czech cuisine and traditional meals is soup. The most common is the infusions with different inserts or closures and the addition of dressed vegetables and herbal spices. Prepared soups are often prepared (usually with gourd), legumes and meat, sausages or offal, which are also served as a separate meal with pastry.

An essential role in Czech gastronomy is played by sauces, often very dense and nutritious using cream. As a basis, beesamel is used, sometimes a lump is used to thicken it.

Main courses As a supplement to the meat, the Czech cuisine uses differently cooked cabbage, cabbage and spinach, as well as all common ingredients (pasta, potatoes, rice) and Czech specialties are dumplings which are most often prepared from cereal flour with the addition of chopped bread (bread dumplings) , or (potato dumplings) of cooked potatoes, flour and semolin

Desserts Common desserts are Czech cakes and desserts. In most cases, they are sweet dishes of various kinds of dough with filling or polished chocolate or other tasting. There are many popular bouquets and cakes, almost every family that bakes has its specialties. However, there are not too much "folk" recipes that would prevail over others. Raw materials include foods of plant origin (eg rhubarb and various fruits), various crumbs, chocolate, plums or poppies. Cakes, spices, creams, homemade whipped cream, marzipan ornaments and the like are added to the cakes.

Thank you for your attention

The European Commission support for the production of this presentation does not constitute an endorsement of the contents which reflects the views only of the author, and the Commission cannot be held responsible for any use which may be made of the information contained therein. 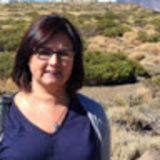