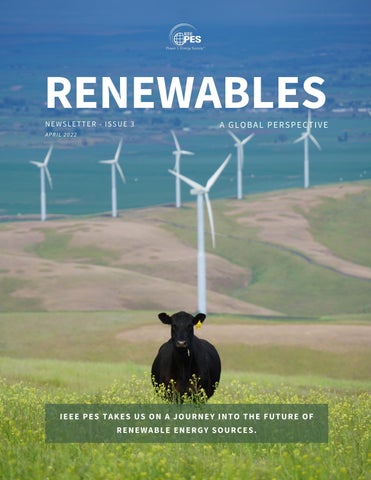 IEEE PES TAKES US ON A JOURNEY INTO THE FUTURE OF RENEWABLE ENERGY SOURCES.

EDITORIAL We are facing today an expressive and fast transition in our electricity sector. Coal and gas are becoming past, and we see that renewable energy sources will drive and power the upcoming generations throughout a better future. Nevertheless, there are still some challenges to surpass if we want to decarbonize our energy sector fully. Are you aware of such challenges and how academia and companies deal with them? If you are interested in this thematic, join us in this newsletter inside the future of renewables! In this month&#39;s PESLetter, we bring an interview with professor Rui Costa Neto (an expert on Green Hydrogen). Further, we give a broader panorama regarding the Renewables in our world and daily lives. Some trending technologies concerning energy generation and storage are also depicted. Lastly, we introduce some curiosities about this theme. For instance, do you know that algae can make renewable energy? No?

Then, dive with us on this newsletter&#39;s issue and learn more about future energy generation!

GLOBAL OVERVIEW What should we expect for the future?

CURIOSITIES Do you know everything about it?

What should we expect for the future?

In the chart you can see the world power matrix (electricity only) in which more than one-third of electricity comes from low-carbon sources. However, in the world energy matrix (transport, heat and electricity), the share of renewables is considerably lower.

The impacts of climate change have sought more effective guidelines in order to mitigate global warming in the medium term. The current race to achieve the sustainable development goals (SDGs) related to this issue is urgent mainly due to the real threat to the ecosystem and consequently to capitalism. COP 26 boosted the growth of projects in renewable energy sources for clean energy generation. More than 20 countries agreed to stop financing fossil fuel projects by the end of 2022. In addition, more than 100 countries have committed to reducing methane emissions by 30% by 2030 compared to 2020. Among those that have agreed are the US and the European Union. Furthermore, the document signed at COP 26 highlights that, in order to avoid temperature increases beyond 1.5°C according to the Paris agreement, global CO2 emissions must be reduced by 45% compared to 2010 levels.

According to the International Energy Agency, solar Photovoltaic (PV) accounts for more than half of the increase in the share of renewable sources in 2021, followed by wind and hydropower. In addition, renewable electricity capacity is expected to grow more than 60 % between 2020 and 2026, reaching 4800 GW, corresponding to today&#39;s combined fossilfuel and nuclear power capacity. China still leads the renewable energy market, mainly for solar PV technology, followed by Europe and the United States, which together account for 80% of the total renewable installed capacity. It is also predicted to double by 2026 that the annual global demand for biofuels will be led by Asia and surpass Europe. This is mainly stimulated by the pandemic crisis as well as decarbonization targets and the instability of fossil fuel prices with the threat of global war. Onshore wind power addition will be about 25% higher. Also, total offshore capacity is expected to more than triple by 2026 and this addition is expected to represent one-fifth of the wind power market and reach 21 GW by 2026.

Furthermore, the growth of dispatchable renewables such as hydropower, bioenergy, geothermal, and concentrated solar power is essential to support the integration and intermittency of solar and wind which represent a projected increase of only 11%. Also, these dispatchable sources have high costs and limited remuneration. Figure (2) shows the historical generation of renewable electricity by source.

A team of researchers from the University of Lancaster recently published a study that promises to contribute deeply to scientific research related to clean energy. They have found a new way of storing solar energy, for even months, and the option of releasing it whenever it is commanded, to produce heat. The secret ingredient in this new storage method is a Metal-organic framework (MOF), previously prepared by a separate research team at Kyoto University in Japan and known as ‘DMOF1’, that is capable of collecting and storing significant quantities of solar energy during the hot days of summer, in order to utilize it in winter or even in domestic use. As these MOFs are porous, special charged molecules are hosted in these pores, and they are able to absorb ultraviolet light and then change shape when light or heat is applied. The MOF pores were loaded with molecules of azobenzene – a compound that strongly absorbs light. These molecules act as photoswitches, which are a type of ‘molecular machine’ that can change shape when an external stimulus, such as light or heat, is applied.

This process stores the energy similarly to the potential energy of a bent spring. Notably, the narrow MOF pores trap the azobenzene molecules in their strained shape, meaning that the potential energy can be stored for long periods of time at room temperature. The energy is released again when external heat is applied as a trigger to ‘switch’ its state, and this release can be very quick - a bit like a spring snapping back straight. This provides a heat boost that could be used to warm other materials and devices.

How much do you know about renewables?

Third-generation photovoltaic cells – The photovoltaic (PV) cell of the future will use nanotechnology! In this new panorama, there are several different material methods that can be employed. The third-generation label encompasses multiple technologies, though it includes nonsemiconductor technologies (including polymers and biomimetics), quantum dots, tandem/multi-junction cells, intermediate band solar cells, hot-carrier cells, photon up-conversion and down-conversion technologies, and solar thermal technologies, such as thermo-photonics. The future of PV is bright! Energy from Algae – Algae are believed to be a good source of renewable energy because of their rapid growth rate and their ability to be cultivated in wastewater or wasteland. Several companies and government agencies are making efforts to reduce capital costs and operating costs and make algae fuel production commercially viable. Algae are the fastest growing plant and theoretically have the potential to produce more oil or biomass per acre when compared to other crops and plants.

Green Hydrogen – This technology is based on the generation of hydrogen through a chemical process known as electrolysis. This method uses an electrical current to separate the hydrogen from the oxygen in the water. If this electricity is obtained from renewable sources, we will produce energy without emitting carbon dioxide into the atmosphere. Still, this process is very costly and not very efficient today, meaning that more technological development is needed. Carbon capture and storage – Carbon Capture and Storage (CCS) is a way of reducing carbon, involving: capturing the carbon dioxide produced by power generation or industrial activity; transporting it; and then storing it deep underground. This technology can be paramount in mitigating climate change in the future!

&quot;The future of Photovoltaic is bright!&quot;

Interview with Rui Costa Neto An expert&#39;s overview about Green Hydrogen. TEXT BY Luiz Almeida &amp; Jônatas Manzolli Rui Costa Neto is a Doctorate Researcher in IN+/IST and Professor at ULHT and ISEL. He has participated in dozens of projects as a coordinator, researcher, project manager, scientific advisor, and evaluator in the energy, environment and transport systems sector.

Question: Could the Professor briefly explain what is Green Hydrogen (GH) and its importance for the renewable energy matrix? Answer: Green hydrogen is a fuel gas produced by the electrolysis of water using only electricity from renewable energy. Being H2 a fuel gas, produced preferably by low-cost renewable energy and water through electrolysis, will allow the various countries of the world to be able to produce their own fuel in a more independent and sustainable way, without fossil carbon emissions. This will also contribute to transforming renewable energy into storable fuel, which will allow the energy security of the various countries, feed mobility as fuel in transport, and

store energy as an additive in natural gas pipelines. Hydrogen will enable the emergence of a new industrial revolution, creating effective value, for more decarbonized and sustainable and more equitable societies. Q: What is/are the main motivation(s) that thrilled the professor for researching GH? A: The main motivation for my GH research is to believe that the hydrogen economy will allow leave a more viable and sustainable world for my children and future generations. And for believing that, hydrogen is the best, among the various vectors ofelectrical and thermal energy storage and the most versatile and abundant.

Q: Which were the advances reached so far for GH and what are the next steps for turning such technology into a successful fuel source? A: The lowering prices of renewable energy and electrolyzers have made electrolysis the most costcompetitive process to produce green hydrogen. The main steps will be: i) to create the supply infrastructure for hydrogen vehicles and inject hydrogen into the natural gas pipelines to save fuel imports; ii) to encourage the implementation of companies producing electrolyzers and fuel cells, which will allow the creation of a new industrial cluster; iii) to decarbonize industry, services and transport, gradually replacing hydrocarbons. Q: What about Portugal, professor? What are the expectations, projects and future avenues that you see regarding GH? A: The development of the Hydrogen economy will allow the promotion of projects that will create many skilled jobs with high added value in engineering,

mechanical, electrical, chemical, environment, logistics, and economics, among others. The first projects to be implemented will certainly be the requalification projects of gas pipelines for industry and services, furnishing projects in public transport, projects for the production of synthetic fuels, to help the transition from a fossil economy to a decarbonized economy. Subsequent projects with hydrogen: decarbonization of large ships and aircraft, implementation of hydrogen vehicles in taxi and Ubers fleets, forklift trucks, and heavy truck transport. Q: Regarding the professor’s perspective, what are the main challenges that GH still need to assess so that it can become an accessible fuel for all of us? A: The main challenges are to further reduce the costs of electrolyzers, increase the renewable power threefold, implement/adapt the infrastructures of distribution and transport of hydrogen in gas pipelines and supply stations, and train qualified staff in this area.

IT&#39;S GAME TIME! Would you like to test your knowledge about renewable energy sources? Check out this quiz we found for you. In this game you learn about sustainable energy, earn credits, and build power plants to meet the city&#39;s energy demand. #knowledgeisfreedom.

THERE MUST BE A BETTER WAY TO MAKE THE THINGS WE WANT, A WAY THAT DOESN’T SPOIL THE SKY, OR THE RAIN OR THE LAND. PAUL MCCARTNEY SINGER, SONGWRITER AND MUSICIAN

RECEIVE FUTURE EDITIONS OF THIS NEWSLETTER BY SCANNING THE QR CODE AND SUBSCRIBING.

We are facing today an expressive and fast transition in our electricity sector. But there are still some challenges to surpass if we want to decarbonize our energy sector fully. If you are interested in this thematic, join us in this PESletter and dive with us inside the future of renewables! 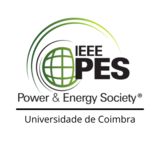