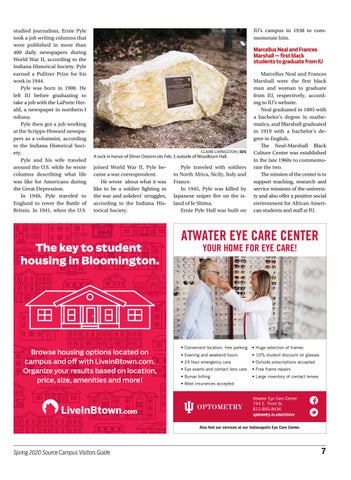 studied journalism, Ernie Pyle took a job writing columns that were published in more than 400 daily newspapers during World War II, according to the Indiana Historical Society. Pyle earned a Pulitzer Prize for his work in 1944. Pyle was born in 1900. He left IU before graduating to take a job with the LaPorte Herald, a newspaper in northern I ndiana. Pyle then got a job working at the Scripps-Howard newspapers as a columnist, according to the Indiana Historical Society. Pyle and his wife traveled around the U.S. while he wrote columns describing what life was like for Americans during the Great Depression. In 1940, Pyle traveled to England to cover the Battle of Britain. In 1941, when the U.S.

IU’s campus in 1938 to commemorate him. Marcellus Neal and Frances Marshall — ﬁrst black students to graduate from IU

A rock in honor of Elinor Ostorm sits Feb. 3 outside of Woodburn Hall.

joined World War II, Pyle became a war correspondent. He wrote about what it was like to be a soldier fighting in the war and soliders’ struggles, according to the Indiana Historical Society.

The key to student housing in Bloomington.

Browse housing options located on campus and off with LiveInBtown.com. Organize your results based on location, price, size, amenities and more!

Pyle traveled with soldiers to North Africa, Sicily, Italy and France. In 1945, Pyle was killed by Japanese sniper fire on the island of Ie Shima. Ernie Pyle Hall was built on

Marcellus Neal and Frances Marshall were the first black man and woman to graduate from IU, respectively, according to IU’s website. Neal graduated in 1895 with a bachelor’s degree in mathematics, and Marshall graduated in 1919 with a bachelor’s degree in English.  The Neal-Marshall Black Culture Center was established in the late 1960s to commemorate the two. The mission of the center is to support teaching, research and service missions of the university and also offer a positive social environment for African American students and staff at IU.

Also find our services at our Indianapolis Eye Care Center.