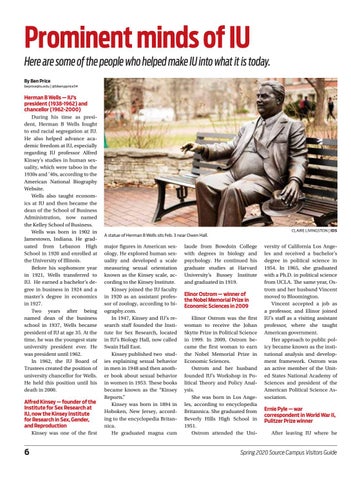 Prominent minds of IU Here are some of the people who helped make IU into what it is today. By Ben Price beprice@iu.edu | @bbenpprice54

Herman B Wells — IU’s president (1938-1962) and chancellor (1962-2000) During his time as president, Herman B Wells fought to end racial segregation at IU. He also helped advance academic freedom at IU, especially regarding IU professor Alfred Kinsey’s studies in human sexuality, which were taboo in the 1930s and ’40s, according to the American National Biography Website. Wells also taught economics at IU and then became the dean of the School of Business Administration, now named the Kelley School of Business. Wells was born in 1902 in Jamestown, Indiana. He graduated from Lebanon High School in 1920 and enrolled at the University of Illinois.  Before his sophomore year in 1921, Wells transferred to IU. He earned a bachelor’s degree in business in 1924 and a master’s degree in economics in 1927.   Two years after being named dean of the business school in 1937, Wells became president of IU at age 35. At the time, he was the youngest state university president ever. He was president until 1962.  In 1962, the IU Board of Trustees created the position of university chancellor for Wells. He held this position until his death in 2000. Alfred Kinsey — founder of the Institute for Sex Research at IU, now the Kinsey Institute for Research in Sex, Gender, and Reproduction Kinsey was one of the first

A statue of Herman B Wells sits Feb. 3 near Owen Hall.

major figures in American sexology. He explored human sexuality and developed a scale measuring sexual orientation known as the Kinsey scale, according to the Kinsey Institute. Kinsey joined the IU faculty in 1920 as an assistant professor of zoology, according to biography.com. In 1947, Kinsey and IU’s research staff founded the Institute for Sex Research, located in IU’s Biology Hall, now called Swain Hall East. Kinsey published two studies explaining sexual behavior in men in 1948 and then another book about sexual behavior in women in 1953. These books became known as the “Kinsey Reports.” Kinsey was born in 1894 in Hoboken, New Jersey, according to the encyclopedia Britannica. He graduated magna cum

laude from Bowdoin College with degrees in biology and psychology. He continued his graduate studies at Harvard University’s Bussey Institute and graduated in 1919. Elinor Ostrom — winner of the Nobel Memorial Prize in Economic Sciences in 2009 Elinor Ostrom was the first woman to receive the Johan Skytte Prize in Political Science in 1999. In 2009, Ostrom became the first woman to earn the Nobel Memorial Prize in Economic Sciences.  Ostrom and her husband founded IU’s Workshop in Political Theory and Policy Analysis. She was born in Los Angeles, according to encyclopedia Britannica. She graduated from Beverly Hills High School in 1951.  Ostrom attended the Uni-

versity of California Los Angeles and received a bachelor’s degree in political science in 1954. In 1965, she graduated with a Ph.D. in political science from UCLA. The same year, Ostrom and her husband Vincent moved to Bloomington. Vincent accepted a job as a professor, and Elinor joined IU’s staff as a visiting assistant professor, where she taught American government.  Her approach to public policy became known as the institutional analysis and development framework. Ostrom was an active member of the United States National Academy of Sciences and president of the American Political Science Association.  Ernie Pyle — war correspondent in World War II, Pulitzer Prize winner After leaving IU where he